American Democracy is Failing, No Matter Who Wins This Election

Published October 28th, 2020 - 06:13 GMT
A grave questioning God's existence stands in West Virginia (AFP/FILE)
Somewhere out there in the U.S., there’s an election going on.

Political machines are ticking over, hyping up their candidates to likely voters, scheduling media appearances and organizing rallies. But this is only happening in pockets. For most of the time for most Americans, I suspect, this election amounts to a kind of abstracted political choice that feels both existentially important and disempowering at the same time.

There are more immediate concerns, like the state of economy and public health, to which neither candidate on offer appears to have a substantial enough response. There is no sense of a post-election political agenda laid out by either Joe Biden or Donald Trump. And there is no sense of an alternative means of political mobilization available to most Americans that would make an impact on their lives either, so numbness pervades.

This feeling is hard to capture by journalists and analysts.

It’s the absence of energy, a negative void where there should be enthusiasm and momentum. It can be momentarily seen via proxy by polls showing dwindling interest in Biden and Trump, and counter-examples can be highlighted by showing busy rallies and massive protests. But Trump’s rallies amount to a form of political theater to give the appearance of a mass movement backing his agenda. And Biden has all but disavowed the myriad protests happening throughout the U.S., leaving them little room to have their political demands be represented by a major party.

For the most part, the overriding feeling of this election is being missed by major news outlets. It feels like a funeral procession held on a national scale.

Rather than champion responses to these ills, both Trump and Biden appear intent on side-stepping the issue.

The official unemployment rate of the U.S. is around eight percent, but the unofficial rate, measured by the amount of people who are looking for jobs but can’t find one, is 26.1 percent. About half the country could not afford a $400 emergency expense before the pandemic began. Household debt is higher than at any other recorded time at a whopping $14.3 trillion, meanwhile consumer purchasing power is dismally low from wage and hour cuts and diminishing assets.

The wealth gap is becoming staggering: by some accounts, the American tax system is becoming regressive, meaning the richest pay less in taxes than the poorest. Meanwhile, speculative finance firms are hedging that mobile homes will be the only viable real estate investment for the pandemic-riddled working and middle class.

Rather than champion responses to these ills, both Trump and Biden appear intent on side-stepping the issue. Trump is a fan of citing stock market listings as the barometer of the economy under him, while Biden tours America bloviating and claiming to represent vacuous concepts like “dignity,” and “truth” making sure to never attach any grounded political demands to either. 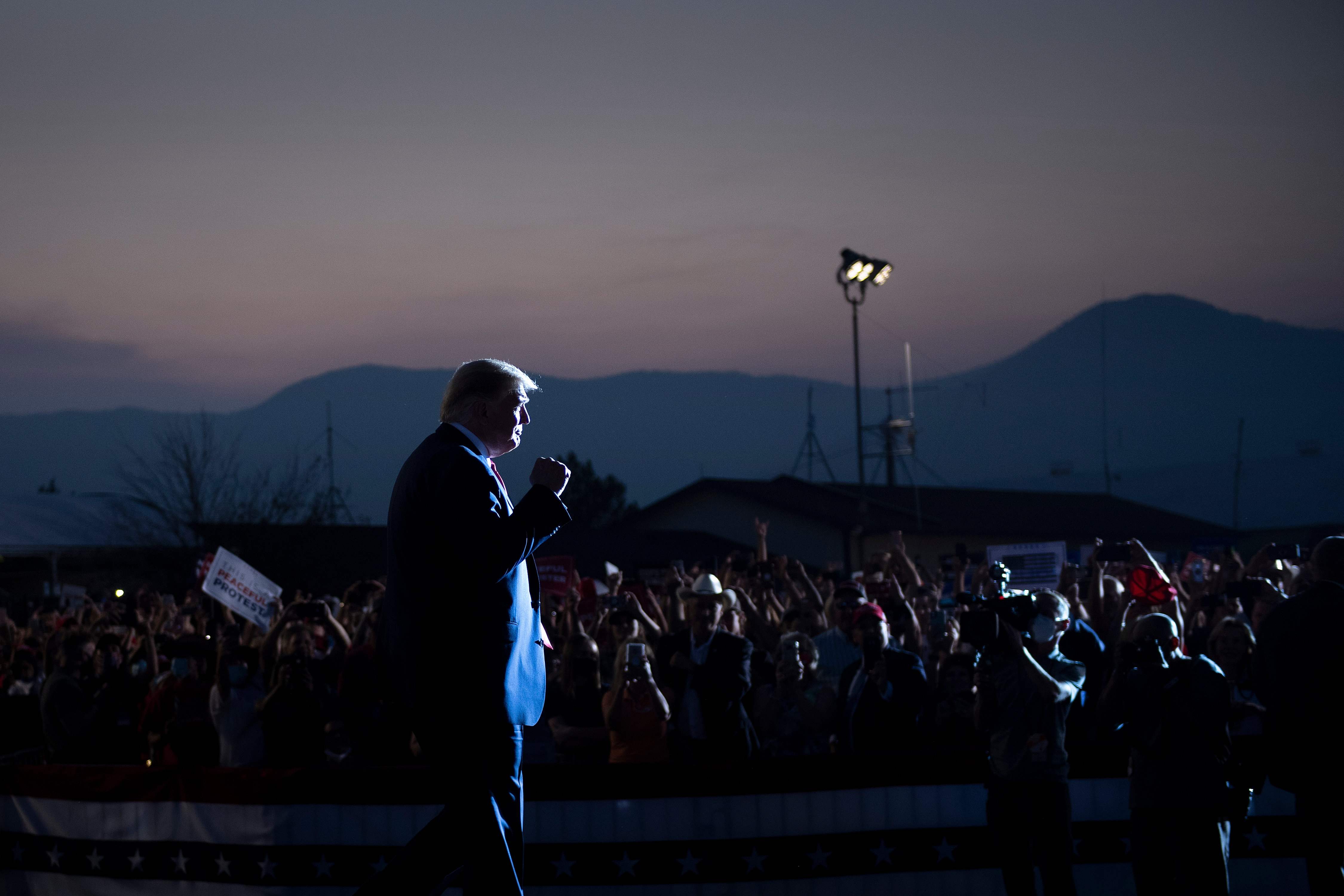 Trump speaks at a rally in Nevada (AFP/FILE)

With nowhere for the anxiety, horror, and heartbreak of the current American experience to be expressed politically, it’s turning inward. Suicides are on the rise, as are drug overdoses. On the fringes, conspiratorial beliefs like QAnon are gaining prevalence: the last resort of an alienated population seeking knowledge and access to power. Cities are stuck in an endless-seeming loop between half-hearted opening and closing measures based on infection rates. Hospitals ebb and flow with people dying of COVID-19. Quiet conversations around the kitchen table about what to sell, which gig company to work for, and how to pay rent abound.

Somewhere in this maelstrom, there is an election going on.

Rather than mustering mass politics, Trump and Biden are traveling a quarantining America in little groups of staffers and journalists.

Between a doddering Biden, who no one on the left wants and who was nearly abandoned by his own party in the primary. And Trump, whose once-preternatural knack for riling populist anger appears diminished. His 2016 takedowns against Ted Cruz, Marco Rubio, Jeb Bush, and then Hillary Clinton were nothing if not legendary acts of political maneuvering. But the insults aren’t ringing the same way this time around. Even his loyal base feels the pain of an economy collapsing around them. The obvious fall-guy is the incumbent. Neither party is making clear what it will do for the people if given electoral victory.

This is strange. The feeling of numbness and defeat shouldn’t be there. Pundits and liberal elites are claiming this election could decide whether U.S. is a democracy or not, and they have a point. An increasingly radicalized Republican party is deploying a variety of strategies to render voting either impossible or meaningless. Their own platform amounts to a personalist pledge of loyalty to Trump, who himself struggles with articulating to his supporters why he deserves four more years. Americans should be energized. 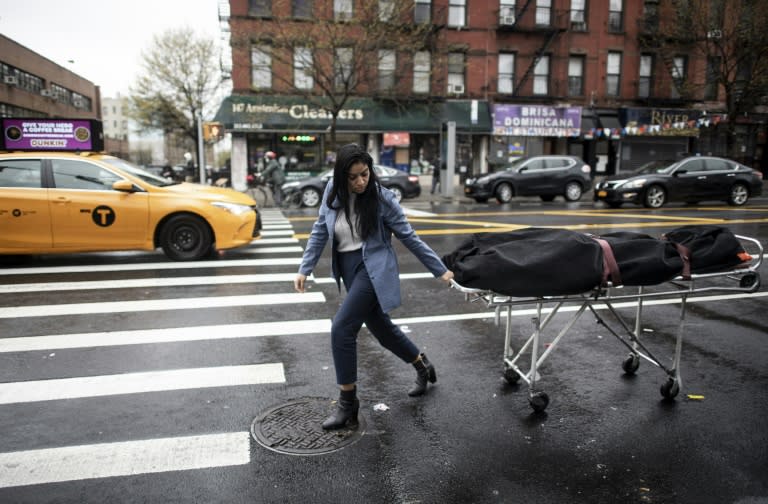 A funeral manager walks in New York City transports a dead boy to her funeral home on April 24, 2020 (AFP/FILE)

But democrats are doing everything in their power to turn out the vote without conceding core elements of their own neoliberal agenda. Biden has already begun a shift rightward in an attempt to win over an imagined set of Republican-leaning voters who would nonetheless vote for him. Rather than appearing ambitious, he’s citing debts and deficits in playing down the possibility of massive political and economic reforms. Journalists are left idly speculating on the famous ‘First 100 Days’ of his presidency, the period where his platform could be meaningfully pushed.

Rather than mustering mass politics, Trump and Biden are traveling a quarantining America in little groups of staffers and journalists. They are blips of power generating temporary support in the localities they visit. But once they're gone, those localities are back in the mud, abandoned.

Biden are traveling a quarantining America in little groups of staffers and journalists. They are blips of power generating temporary support in the localities they visit. But once they're gone, those localities are back in the mud, abandoned.

So voting is happening, yes.

Early voting is exceeding every previous record set, and overall turnout looks to be an increase from 2016. But while media outlets cover this as an electoral triumph of sorts, it may instead be a form of somber defeat. People are piling into polling stations, waiting hours upon hours to do their solemn duty to preserve the vestiges of democracy, knowing full-well neither party represents them.

Meanwhile, their modicum of economic security is fast disappearing. Their ability to meaningfully participate in a democracy fading, as debt, exploitation and hopelessness overtakes them. Their only avenues to push for change found through non-electoral means of direct action with a local focus.

There will be no hope found from the ballot box this year. This election is only a way to keep some of the U.S.’ basic political institutions in place for now. But what comes next is the great unknown.

The state of American democracy is deteriorating, no matter who wins.

Rather than mustering mass politics, Trump and Biden are traveling a quarantining America in little groups of staffers and journalists.
he state of American democracy is deteriorating, no matter who wins.