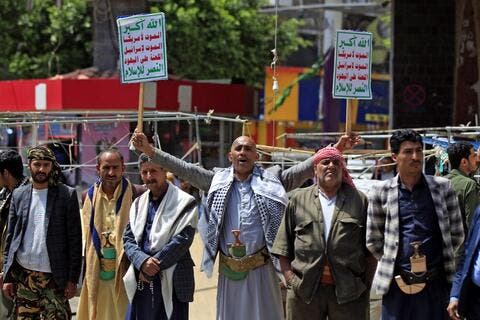 A booby-trapped drone targeted Khamis Mushait early in the morning before seven more targeting the southern region were intercepted in Yemeni airspace during the afternoon.

Khamis Mushait was again targeted by two drones in the evening.

Another drone targeted Najran late evening before six more were shot down near midnight.

The Council of Arab Interior Ministers expressed its strong condemnation and absolute rejection of the terrorist attacks.

“The General Secretariat of the Council condemns these cowardly terrorist acts through which this militia is trying to target civilians and civilian objects on an ongoing and systematic basis, and this represents a violation of international law and war crimes and its perpetrators must be held accountable,” it said in a statement from its headquarters in Tunis.

The attacks are “clear evidence of the persistence of this militia in its blatant transgressions and its continuous refusal to comply with calls for peace and the efforts made to try to reach a political solution to the Yemeni crisis.”

The Arab interior ministers council renewed its full solidarity with Saudi Arabia and its absolute support in all the measures it takes to repel terrorist attacks, defend its security and protect its lands its facilities, citizens and residents.

Nayef Al-Hajraf, secretary-general of the Gulf Cooperation Council, condemned the continued and repeated attacks by the Iran-backed Houthis and said this reflects their blatant defiance of the international community, their disregard for all international laws and norms, and their rejection of all efforts aimed at bringing peace to Yemen.

He also called on the international community to assume its responsibilities and take a decisive stance toward the Houthi militia to stop these repeated terrorist acts targeting vital and civilian facilities.

The Muslim World League said “these attacks reflect the level of barbarism and the state of humiliation and despair that this militia suffers, while the Kingdom, in confronting this terrorist behavior, affirms its full ability to protect its lands and silence this criminal absurdity, with its high moral commitment stemming from its religious and national values and respect for international laws, charters and norms in its leadership of the Arab coalition.”

Saudi Arabia’s air defenses intercept and destroy a booby-trapped drone launched by the Iran-backed Houthi militia towards Khamis Mushait, according to the Arab Coalition.https://t.co/1EnmthN1vu

Djibouti’s ambassador to Saudi Arabia Diaa-Eddin Saed Bamakhrama said: “While the world is looking for solution initiatives in Yemen in order to achieve security and peace for its people, the militia continues to target civilians in Saudi Arabia,” Saudi Press Agency SPA reported.

The Arab Parliament, meanwhile, stressed the need for the international community to take immediate measures against the militia that threatened peace and security in the region.

Kuwait said it supported all the measures taken by Saudi Arabia to maintain its security and stability.

The UAE condemned the Houthis for “systematically targeting civilians,” while Jordan said any threat to the security of Saudi Arabia was a threat to the entire region. 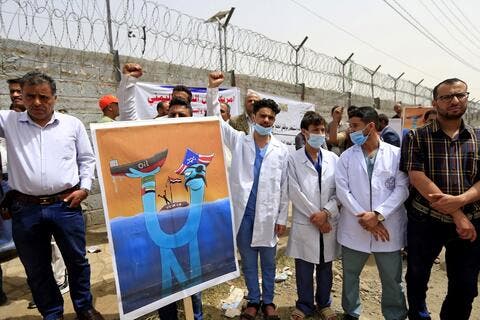 The Houthi’s deliberate and systematic escalation against Yemen constituted a war crime, the Arab coalition said, adding that it was taking measures to protect civilians from attacks.

The Iran-backed Houthis have been attacking the Kingdom with explosive-laden drones on an almost daily basis in recent weeks despite US, United Nations and Saudi calls for a ceasefire in Yemen.