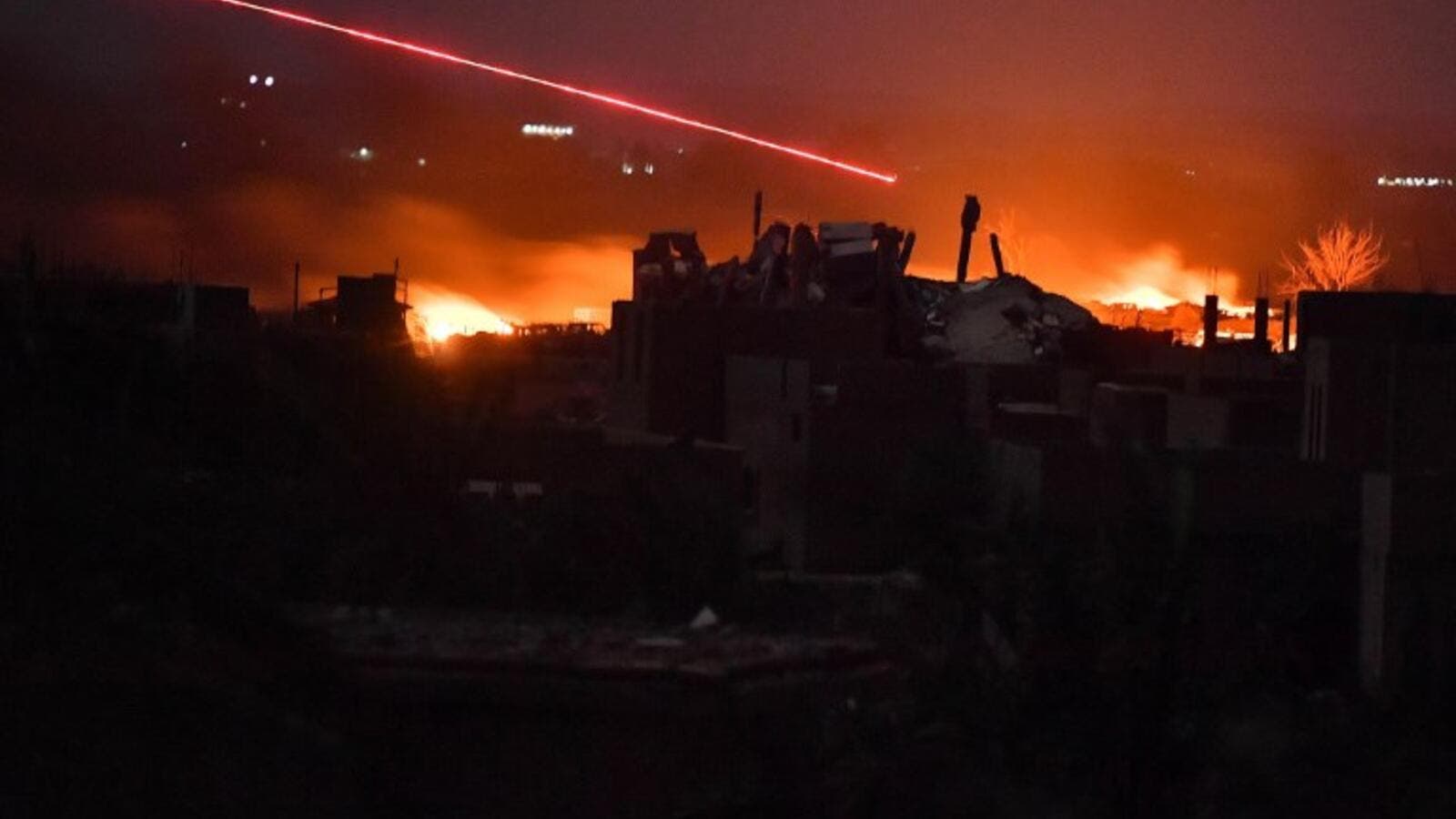 The fight for Baghouz between ISIS and the SDF (AFP/FILE)

In the shallow trenches recently dug, fighters and families of ISIS shield themselves from a hail of small arms fire, artillery shelling and snipers. Injured fighters leaning on crutches hobble towards the fighting. Women and children shoot AK-47s vaguely at the Kurdish-led Syrian Democratic Forces (SDF). In the sky, mountains of fire and smoke form the backdrop amidst the constant sounds of battle. With their backs against Euphrates River, many ISIS members are making their last stand before they are killed.

Baghouz, a small town in southeastern Syria, is where ISIS’ Caliphate, which used to encompass an area as large as Britain and rule millions, will be reduced to a memory—a propaganda piece to inspire ISIS’ next mutation of sleeper and guerrilla cells deployed throughout Iraq and Syria.

In that town, thousands of ISIS fighters have been holed up, many of whom have now either been killed or have surrendered. It has been pounded into rubble by airstrikes, shelling, mortars and assaults.

An Apocalypse on the Banks of the Euphrate

As of press time, ISIS controls only a tiny sliver of land in between Baghouz and the Euphrates River. There, a cluster of trucks, tents, trenches and destroyed buildings cover the battlefield, providing light or no cover to the overwhelming attack by SDF forces backed by tribal militias and U.S. military support.

The images from the area depict the battle to defeat ISIS’ Caliphate in Baghouz as an apocalypse. Even ISIS’ own propaganda video and pictures, released throughout March, show the group struggling to hold on as injured fighters and child soldiers toil.

(ISIS propaganda featuring a child soldier in the center-left)

In February, the remnants of ISIS retreated from neighboring towns into Baghouz, which they held until March 18. On that day, the SDF launched an assault and pushed them to the banks of the Euphrates River. Initial estimates put ISIS’ fighting strength near 200, but after intense fighting involving thousands of fighters, it became clear there were far more.

During an earlier assault, which was halted due to the number of civilians present, British special forces found the severed heads of 50 Yazidi women and children. ISIS had kept thousands of them as slaves and appear to be systematically killing them before they are defeated.

An SDF spokesperson, Kino Gabriel, estimated on March 17, the day before the assault, that 5,000 were in Baghouz. Gabriel also said they had killed over 1,300 fighters, and that 37,000 civilians had fled the small riverside town.

On March 19, over 1,000 ISIS fighters reportedly surrendered to the SDF. Twelve others refused to lay down their arms, and they detonated explosives attached to their vests.

Videos have emerged showing long lines of exhausted or injured ISIS fighters slowly trickling out of Baghouz en route to detention centers run by the SDF. Kurdish authorities insist that though they can hold ISIS fighters and their families in prisons and refugee camps for now, they must eventually be transferred.

The U.S. and Europe are now engaged in domestic debates as to whether they will accept foreign fighters who seek to return to their home countries, or to revoke their citizenship and let others deal with them.

With tens of thousands streaming out of Baghouz, many of whom hail from Europe, the question will only become more important and politically charged.

Baghouz, the last holdout of ISIS in Syria (AFP/FILE)

Pieter Van Ostaeyen, a researcher at Leuven University and expert on ISIS, estimated to Al Bawaba that the costs of this battle will likely be astronomical.

“The number of civilians in Baghouz cannot be calculated,” he added. “This is surely one of the biggest defeats of the Islamic State.”

Though ISIS had been using thousands of civilians and family members as human shields, the U.S.-backed forces continued with massive airstrikes, and may have even used white phosphorus in the assault; a chemical substance that can be used as an indiscriminate incendiary munition, which burns skin it touches. An unverified video shows what appears to be white phosphorus falling on Baghouz.

Those who have managed to flee Baghouz must trudge along a mine-laden path northward.

Without access to medical equipment or stable access to food and water, many civilians have collapsed and died along the way to SDF camps. Civilians and SDF fighters manning outposts along the route are also weary of ISIS infiltrators who may pose as civilians only to attack soldiers.

Civilians, including wives and children of ISIS fighters, are sent to Al-Hawl Refugee Camp. There, an estimated 68,000 people are huddled together: the camp itself is officially capped to only be able to host 55,000.

“It was difficult to get out,” said a teenage mother of three children who fled to al-Hawl. “We were starving. There was bombing. It was cold, the kids were sick.” ISIS executed her husband when they found out he and his wife had plans to flee.

A report from The Guardian estimates there to be as many as 5,000 children whose parents are foreigners, though the volume of refugees flowing in make exact numbers impossible to know for now.

In the camp, a mix of civilians and ISIS wives still indoctrinated by the Caliphate’s ideology create a tense atmosphere. Journalists attempting to interview the wives have been harassed with shouts, slurs and water bottles thrown at them.

“All of this is for the sake of Allah,” said 19 year-oldYasmina Haj Omar in al-Hawl. Omar was married six times to ISIS fighters; every husband was successively killed in combat. “For the glory of God. Each time one husband was martyred I married another.”

ISIS’ caliphate is over, but efforts are already underway to transform the group from a centralized army back to a loose group of terror cells.

“They do believe that this is just a test from God and that God is still on their side and that they will regain their strength,” Van Ostaeyen said.

Until then, both ISIS members and the rest of the world anxious look for what will come out of the ashes of the years-long campaign to dislodge and dismantle the nascent terror group.