Published May 10th, 2021 - 05:28 GMT
Israel vowed Sunday to restore order in Jerusalem after hundreds of Palestinian protesters were wounded in weekend clashes with Israeli security forces, as a key court hearing on a flashpoint property dispute was postponed. Ozan KOSE / AFP
Highlights
Health professional and two journalists among those injured by Israeli forces

At least 14 Palestinians were injured late Sunday in clashes with Israeli police in East Jerusalem, according to the Palestinian Red Crescent. 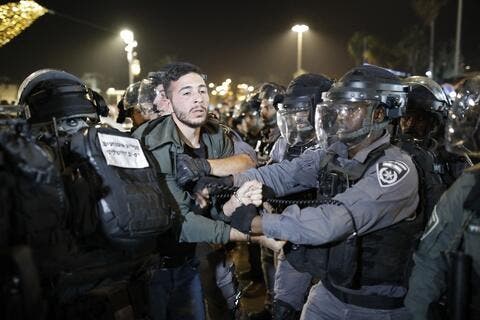 Four of those injured in the Israeli attacks near Damascus Gate and in the Sheikh Jarrah neighborhood were hospitalized, it said in a statement.

A health professional was also injured when Israeli forces targeted an ambulance belonging to the Palestinian Red Crescent with rubber bullets and stun grenades during clashes in the At-Tur neighborhood, it added.

Two journalists were also among those injured during the conflicts near Damascus Gate and in Sheikh Jarrah.

Many Palestinians have been taken into custody by police, said the statement.

Palestinians in Jerusalem in recent days have protested in solidarity with residents of Sheikh Jarrah amid attacks by Israeli police.

The crisis stems from a ruling by the Israeli Central Court in East Jerusalem, which approved a decision to evict seven Palestinian families from their homes in favor of Israeli settlers at the beginning of this year.

Israeli police attempted to disperse worshippers inside the Al-Aqsa Mosque compound Friday evening using stun grenades and tear gas. Hundreds of Palestinians were injured in the attacks, which have been condemned worldwide.

Tens of thousands of Palestinians had gone to pray at Al Aqsa Mosque on one of the holiest nights in Ramadan. 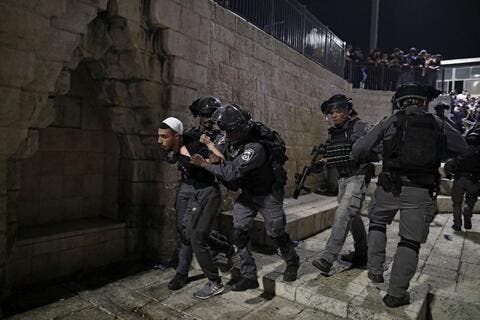