Published May 17th, 2021 - 08:33 GMT
Workers are seen amid the burning funeral pyres of people who died due to the Covid-19 coronavirus at a cremation ground in New Delhi on May 17, 2021. Sajjad HUSSAIN / AFP
Highlights
The world reports a decline in terms of Covid-19 deaths.

Covid-19 deaths and cases are stabilizing throughout the world with the exception of India where nearly 27,000 people have died and 2.7 million more become became infected. 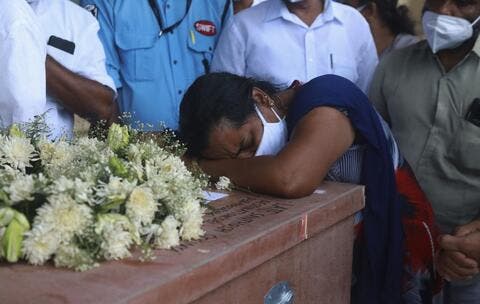 Since the pandemic outbreak began in late 2019 in Mainland China, the pandemic has killed 3,392,909 with 163,715,951 cases, according to tracking by Worldometers.info. Through Saturday, deaths have declined 12% in one week and cases 4%.

India has risen to third in the world with 270,284 fatalities, including 4,077 Sunday, which is lower than the record 4,200 last week. Only two other nations have reported more than that in one day, the United States 4,474 and Brazil with 4,211. The United States previously had the infections record with 299,786.

Among nations in the top 10 for most deaths, increases have only been posted in India with 4%, Colombia with 9% and Russia with 1%. Like India, the outbreak has been surging in Colombia, which entered the top 10 for the first time, displacing Spain, with 80,780, including 530 Saturday, only behind India and Brazil.

The world's second-largest nation of 1.4 billion has been lagging in vaccines though it is a dominant manufacturer of the doses worldwide. Only 10.3% of the residents have received at least one dose. Worldwide, 1.4 billion shots have been given in the population of 7.9 billion with a two-dose regimen required for most brands.

The United States has administered at least one dose to 47.6% of its population with Brazil at 18.2%, according to tracking by Bloomberg. Britain, which inoculated the first person in the world in December, is among the best in the world with 54.4%.

Since May 1 in India, anyone aged 18 or over is eligible for a vaccine though there are shortages.

The government was setting up new hospitals and oxygen generating plants as well as increasing supplies of medicines and vaccines. About 90% of intensive-care-unit beds in the Delhi region remain occupied.

On Friday, Modi told the nation about the "invisible enemy."

"I want to warn you about corona," he said. "This pandemic is spreading fast in rural villages. Every government is making efforts to stop this. But awareness of this among rural people and the cooperation of panchayats is equally important."

A lockdown in India's capital region of Delhi which began on April 19 was set to end Monday but a one-week extension was announced Sunday.

Though COVID-19 originated in Mainland China, the nation with the world's largest population of 1.5 billion has reported only a few deaths in the past 12 months and stands in 60th at 4,636 behind Azerbaijan with 4,779. China added 18 cases Sunday.

Iran has the second-most deaths in Asia and 12th worldwide with 303 reported Sunday.

Six areas are currently under a full-fledged emergency, including Tokyo, where the Summer Olympics are scheduled to start on July 23. Another 13 are in a quasi-state of emergency through June 13, including Okinawa.

Nearly 70% of the Japanese population do not want the Olympics to take place, but the International Olympic Committee and the government want them to proceed. A contract between the IOC and host city only allows the IOC to cancel the games. The Olympics already were postponed from 2020.

Japan has vaccinated only 3.2% of the population with at least one dose.

South Korea's tighter restrictions last through May 23 in Seoul and its surrounding Gyeonggi province.

Conversely, Israel, which is considered part of Asia, has fully vaccinated 60% of its population, among the best in the world. Its death toll is 6,382, rising by six in one week, including one Sunday.

Chile, which ranks 23rd in the world with 27,832, including 98 Sunday, leads South America in vaccination percentage with 47.2% of its 19.3 million population receiving at least one shot.

An official inquiry was opened late last month to investigate the government's handling of the pandemic. President Jair Bolsonaro, who opposes lockdowns, masks and vaccinations, said he is "not worried" about the investigation.

Prime Minister Boris Johnson has pushed to accelerate second doses of vaccines amid a contagious variant from India.

"The race between our vaccination program and the virus may be about to become a great deal tighter, and it's more important than ever therefore that people get the protection of a second dose," said Johnson.

Plans are to inoculate everyone by July.

He warned further steps to get out of the lockdown might be delayed because of the variant concerns.

On Monday, people can meet in groups of up to 30 outdoors. Also allowed will be indoor dining and drinking with indoor entertainment, including concert halls and theater, allowed. And face coverings will no longer be recommended for students in secondary schools and in-person teaching for all remaining college students.

Britain has a travel ban to many nations though it has enacted its first "green list," allowing people to travel to other countries, including Israel and Portugal, starting May 17 and return home without the need to quarantine.

In France, all travel to and from non-European countries is banned, although it is hoped the country will be ready to open to them in June with "green cards."

Italy, which is in a semi-lockdown, depending on the region, is also planning "green cards" to avoid the need for quarantine.

Germany, which is in a lockdown, allows travel to EU members, Schengen states and nations with low infection rates. But they must prove a negative tests before traveling. Those from high-risk area must quarantine for 10 days.

In Spain, the six-month lockdown ended May 9. Regarding travel, it's banned from those outside EU/Schengen until May 31. Those arriving from the EU and Britain must have a negative covid test within 72 hours.

In North America, the nonessential travel ban among Mexico, Canada and the United States has been extended through May 21. It began one year ago in March.

My colleagues @Sondreus @martgnz @futuraprime @MatterofMatt have put together a world-class machine-learning model to predict excess deaths from covid-19 in every country over the last year. It estimates ~10m excess covid deaths worldwide, ~600k in the US.https://t.co/stQu6MLTlR pic.twitter.com/tihi7aHira

Cancun is a popular tourist destination. Though the airport recorded more than 692,000 passenger arrivals in March, the area is in the midst of restrictions because of an increase of cases 65% there. On May 3, Gov. Carlos Joaquín moved Quintana Roo to high-risk orange, meaning bars and nightclubs are closed; restaurants, hotels and theme parks are limited to 50% capacity with beaches, parks, movie theaters and salons limited to 30%.

Vaccination rates are much different in the two U.S. neighbors: Mexico at 11.8%, though it was the first Latin American nation to begin vaccinating people, and Canada at 39.4%, which is 7.7% less than the United States.

By the summer, the Public Health Agency of Canada hopes to allow camping, hiking and picnics but avoidance of crowds of 76% of those eligible for vaccines have at at least one dose and 20% for both.

In the fall, indoor gatherings with people from different households, indoor sports and family gatherings will be allowed if the vaccination rate hits 75%. Conversely, in the United States masks and social distancing are not recquired for fully vaccinated individuals.

"For now, you need to keep following public health advice, whether or not you've been vaccinated, to keep yourself, your family, and your community safe. More people need to be vaccinated before we can ease restrictions," said Canadian Health Minister Patty Hajdu.

Australia has vaccines available for 6% of the population with dosage administration not available. New Zealand has administered first doses to 5.5% of its population.

Australia's international borders will largely remain closed until mid-2022, according to federal budget papers, despite the nation expecting to have everyone fully vaccinated by the end of this year. All Australians older than 50 are currently eligible get a vaccine.

Prime Minister Scott Morrison posted on Facebook last week the 2021 budget "is all about securing our economic recovery from COVID-19, creating more jobs and better jobs, keeping our economy strong so we can guarantee the essential services Australians rely on, and building a stronger and more resilient Australia so we can keep Australians safe in these uncertain times." 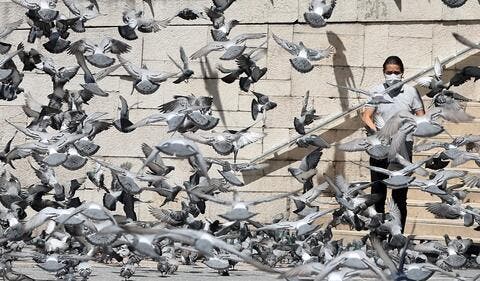 The nation has been bracing for a third wave with it already occurring in the economic hub of Gauteng province where they climbed from 600 to 1,200 in one day last week.

South Africa, which is dealing with a variant, has vaccinated 0.7% of its population with its first dose. Among continents, Africa has the slowest rate of vaccinations at 1.7%, according to tracking by The New York Times. North America leads with 53%, followed by Europe at 38%, South America at 22%, Asia at 15% and Oceania at 8.5%.