North Korea denied reports that it had sold rockets and artillery to Russia and warned the United States "to keep its mouth shut," state media reported Thursday. 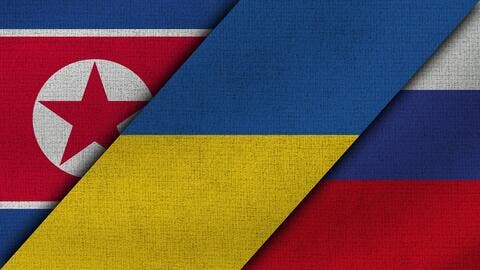 Why are North Koreans Being Sent to Ukraine?

"We have never exported weapons or ammunition to Russia before and we will not plan to export them," an unnamed defense official said in a statement carried by Korean Central News Agency.

"It is not sure from where the rumor originated which the U.S. is spreading, but it is aimed at tarnishing the DPRK's image," the official said.

North Korea says it has never supplied weapons to Russia and has no plans to do so, condemning US claims of arms transfers for the Ukraine war as an attempt at “tarnishing” the country’s image https://t.co/p8ZsI0Rc7h pic.twitter.com/udq2sMxgZe

A U.S. State Department spokesman said earlier this month that Russia was "in the process of purchasing millions of rockets and artillery shells from North Korea for use in Ukraine."

"This purchase indicates that the Russian military continues to suffer from severe supply shortages due in part because of export controls and sanctions," spokesman Vedant Patel said at a press briefing.

Patel added that any sale would be a violation of U.N. Security Council sanctions, which prohibit U.N. member states from procuring all arms and related material from North Korea.

Reports that Russia has also turned to Iran for military assistance were bolstered last week when British Defense Intelligence said that Moscow had "highly likely deployed" Iranian-made drones in Ukraine.

In its statement Thursday, North Korea defended its right to sell weapons and said it does not abide by the Security Council sanctions.

"Not only the development, production, possession of military equipment, but also their export and import are the lawful right peculiar to a sovereign state, and nobody is entitled to criticize it," the official said. "We have never recognized the UNSC unlawful 'sanctions resolution' against the DPRK, which was cooked up by the U.S. and its vassal forces."

"We warn the U.S. to stop making reckless remarks pulling up the DPRK and to keep its mouth shut," he added.

Pyongyang's relations with Moscow, which cooled in the years following the 1991 collapse of the Soviet Union, have picked up recently.

North Korea has publicly expressed support for the Russian invasion of Ukraine, blaming NATO expansion and America's "hegemonic policy" for creating the crisis.