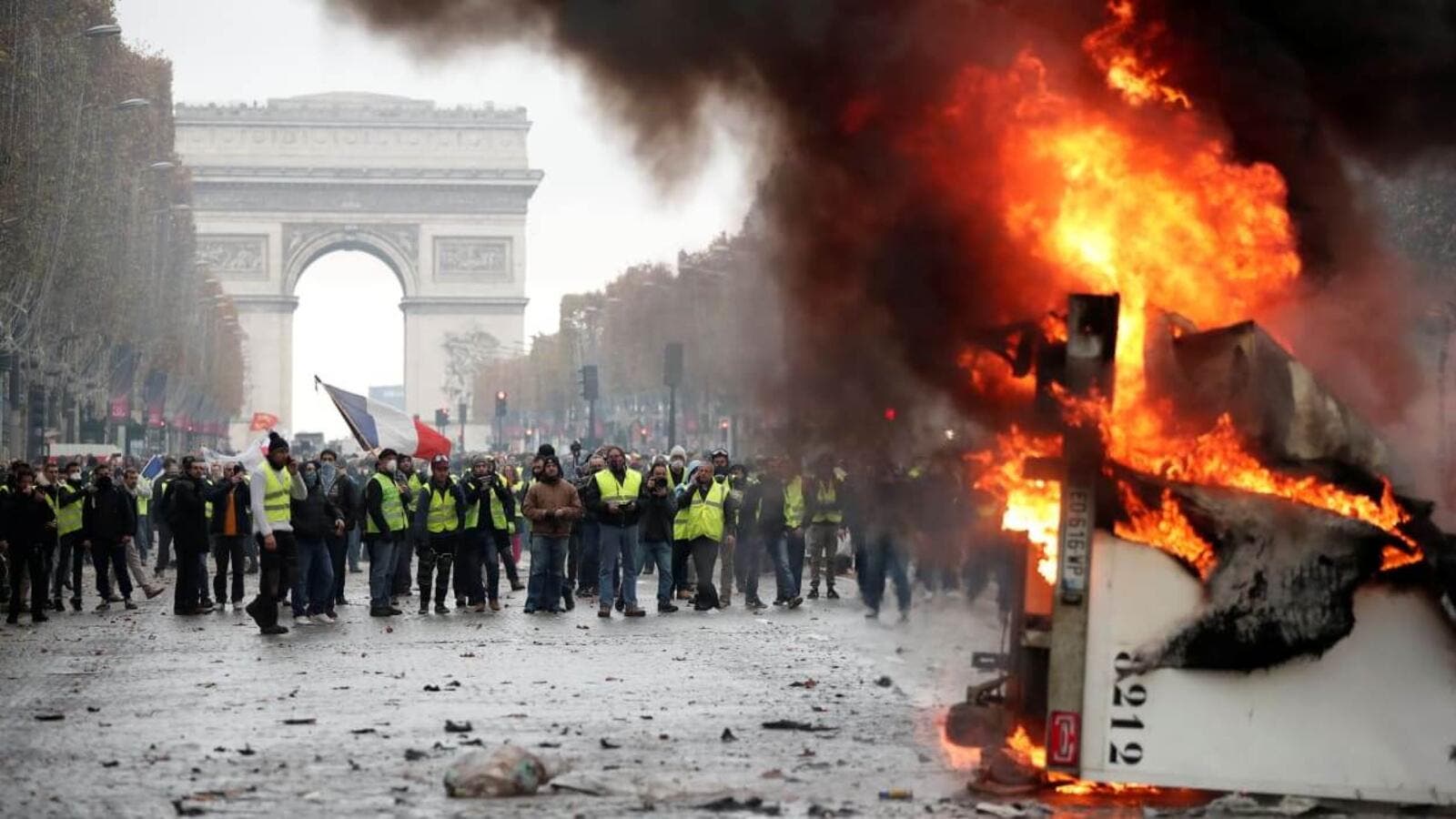 The Yellow Vests in Paris (AFP/FILE)
What do the Yellow Vests have to do with militarized borders being erected around Europe, Australia and the U.S.? Why do concerns about fuel taxes spill over into discussions about global refugee flows?

The answers may be hiding in plain sight, but have so far been largely undiscussed.

The Yellow Vest movement has entered its second year of demonstrations, and though they seem as widely misunderstood now as they were when they first entered onto the world stage, their impact is being slowly realized.

The movement defies the traditional left/right political spectrum in its makeup and set of demands, which were primarily against a government-proposed fuel tax, but has since cascaded into a wider condemnation against French President Emmanuel Macron.

Although Macron is understood globally as a liberal centrist, he is also pioneering a way of governance that emphasizes climate change as a means to impose austerity measures against an already-stagnant middle class and militarize France’s borders to keep undesirable climate refugees out.

It’s a type of governance Joshua Clover today calls Green Nationalism, and it’s one that is being increasingly adopted by states and political parties around the globe.

Al Bawaba spoke with Clover, a professor at the University of California Davis, whose recent book, Riot, Strike, Riot, contextualizes the Yellow Vest movement within the broader struggle to secure the livelihoods of populations in the face of an obstinate regime, including ones that champion Green Nationalism.

According to the worldview of a Green Nationalist, climate catastrophes and an increasingly unstable planet are security threats that should be met with walling oneself off from the globe, and hunkering down inside one’s own borders to try and secure the land and its resources. As climate change makes more areas of Earth hard to live in, we can expect greater flows of people towards comparatively more stable countries like France. From there, Green Nationalists will feel compelled to militarize their borders even more.

Macron’s main political opponent, Marine Le Pen, is widely considered to be far-right, but in fact espouses a similar ideology to Macron’s in this regard. She simply calls it “ecological patriotism.”

The emergence of Green Nationalism as a political force has largely gone under the radar of most major news outlets, because it doesn’t ever fully expose itself in spectacular fashion that can be covered as breaking news.

Rather, it exists under the surface as a driving logic to the events and tensions unfolding in France and around the world today.

“It doesn’t really feat neatly into the left/right divide,” Clover says of the Yellow Vest movement.

The Yellow Vest movement is named after the yellow vests protesters wear; a piece of clothing drivers are legally obliged to have in their vehicle. It has become a sign of the social makeup of the protesters themselves: angry car and truck drivers who consider Macron’s gas and diesel tax to be unacceptable. Although the political leanings of the protesters are difficult to parse or make generalizations about, many are disenchanted with Macron’s technocratic style of governance.

“The question really to me is whether it signals a new direction for mass politics entirely and whether we need to change our frameworks entirely,” he added.

Because the initial concern of the Yellow Vests related to fuel prices, Clover connects the French protest with a global, historically rooted tradition of mobilizing against the rising cost of staple goods or services. Most commonly, bread has been the key good that galvanizes a violent protest if its cost becomes unbearably high.

“This is more and more becoming a state logic about control over borders, control over environmental resources as one in the same.”

In this sense, Clover considers the ]Yellow Vest movement to be similar to the bread riots that made up portions of the 2011 Arab Spring, and the ongoing protests in Lebanon, which were sparked by a government-proposed tax on WhatsApp--a critical way of communication in the country.

More broadly, French indignation against the Macron government relates to his technocratic, liberally-minded approach to governing in the midst of climate change. Central to his administration’s acknowledgment of climate change is the policy-packaging of austerity and militarized borders; of imposing costs of France’s middle class while attempting to hold out the inevitable influx of climate refugees with increasingly militant strategies.

According to Clover, Macron’s politics typifies an emerging ideology of Green Nationalism and shares an uncomfortable emphasis on hardening borders with more extreme worldviews including eco-fascism, where the main threat of climate change seems not to rest on its changes to the physical landscape, but its power to push non-white populations towards wealthy states.

“This is more and more becoming a state logic about control over borders, control over environmental resources as one in the same.”

A dramatic example of this Green Nationalist logic, Clover claims, is found in the Israel-based Jewish National Fund (JNF); a massive non-governmental organization that is one of the largest property owners in Israel.

While the organization claims to have the humane and ecologically sensitive goal of foresting Israel and boasts that it has planted almost 300 million trees, it also reportedly refuses to lease land to Palestinians, despite much of the land they own being taken or sold to them by Palestinians.

To defend itself, the JNF said: “The loyalty of the JNF is given to the Jewish people and only to them is the JNF obligated. The JNF, as the owner of the JNF land, does not have a duty to practice equality towards all citizens of the state.”

Here, the logic of Green Nationalism is laid bare: preservation of the land for those who have a rightful claim to it: desolation for those we deem unworthy of it.