Erdogan Threatens to Extend Offense in Syria After Trump Warnings 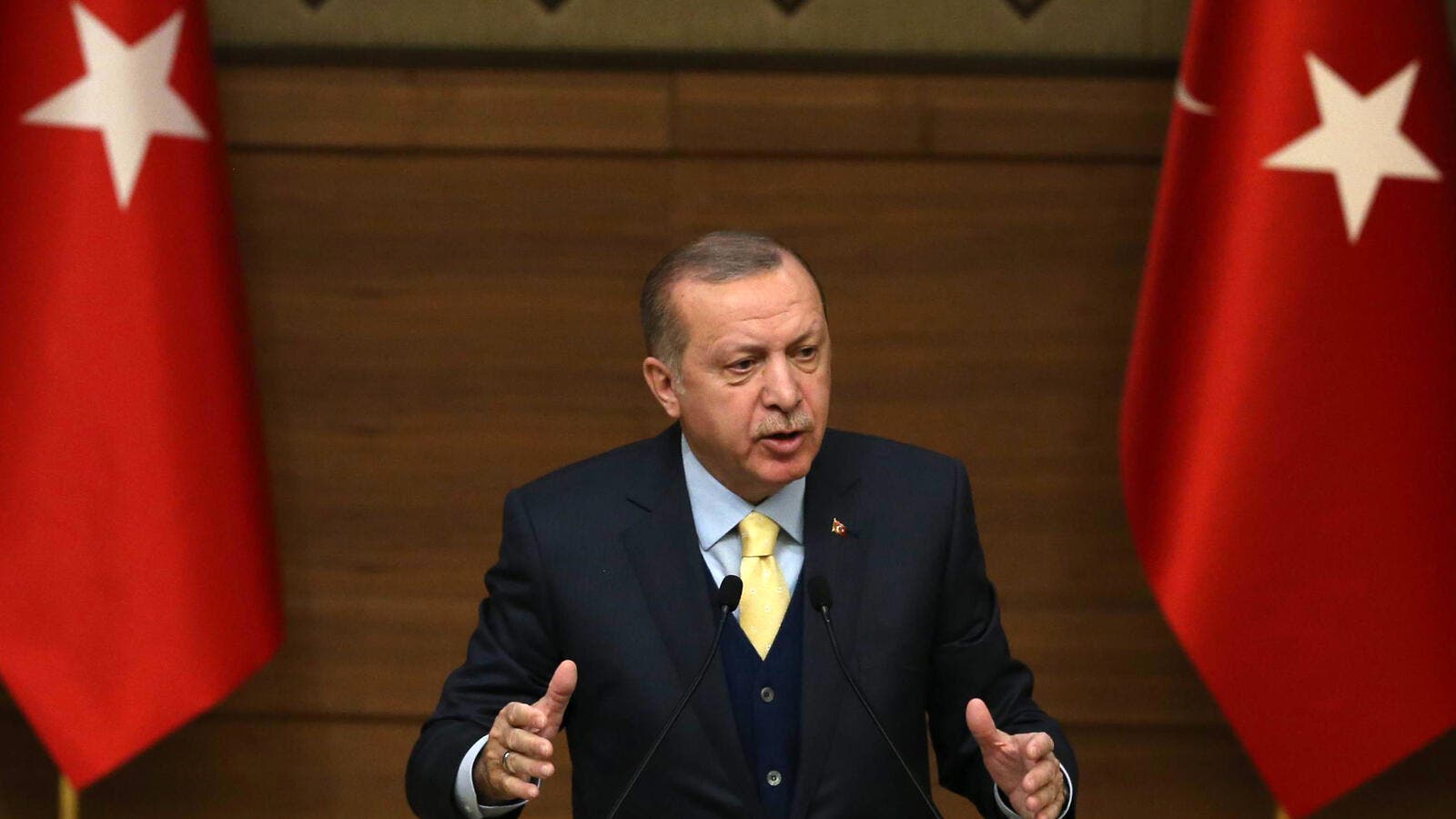 President of Turkey Recep Tayyip Erdogan addresses mukhtars, heads of Turkish villages and neighborhoods, during the 44th Mukhtars Meeting at the presidential complex in Ankara, on January 24, 2018. (Adem ALTAN / AFP)

U.S. President Donald Trump warned his Turkish counterpart Wednesday to avoid any actions that might risk a confrontation between their forces, according to official White House statement. Turkish President Recep Tayyib Erdogan threatened earlier in the day to extend its offensive eastward to Manbij, where U.S. forces are currently stationed.

In a phone call, Trump urged Erdogan to “de-escalate, limit its military actions and avoid civilian casualties” in Syria, the statement read.

In a speech to leaders in Ankara, Erdogan said Operation Olive Branch “thwarted the game of those sneaky forces whose interests in the region are different.”

“Starting in Manbij, we will continue to thwart their game,” he said.

Although the U.S. does not have any forces in Afrin province, it deployed troops to Manbij March last year, following Kurdish forces taking control of the town in 2016.

A senior U.S. official told said that Washington’s primary concern was “the safety and security of troops in the vicinity.”

Jennifer Cafarella from the Washington-based Institute for the Study of War said that “American military forces are currently patrolling front lines in Manbij,” and so any offensive would put the forces at risk.

Manbij military council leader Shervan Darwish told reporters that Kurdish fighters are being deployed to the front lines in anticipation.

“We are in full readiness to respond to any attack,” he said.

The official role of the American troops is to provide the Kurds with training and support against any possible ISIS resurgence, but they have also until now been seen to provide a buffer against Turkish aggression.

This follows suggestions that Kurdish YPG – People’s Protection Units – convoys had previously been deployed from Manbij to Afrin.

Abdul-Rahim, a Turkish backed FSA commander said Sunday that the convoys had “passed through regime territory.”

Sabri Hanan, an Afrin resident, said that civilians were continuing to join the Kurdish forces on the front lines in “large numbers.”

In Afrin, the civilian death toll rose to 28 since the start of the assault, the Britain-based Observatory for Human Rights said. The total death toll – including Turkish-backed and Kurdish fighters – had risen to 125, it said, as the offensive reached its fifth day.

Discussions also continued between Rex Tillerson and Turkish Foreign Minister Mevlut Cavusoglu around the idea of a security zone being established. Turkey had previously said it wanted to establish a 30-kilometer zone on the border.

Tillerson has been moving to de-escalate the situation and improve relations after the United States’ announcement of a 30,000 strong border force with the Kurds upset its key NATO ally.

Erdogan has previously said that it will “strangle” the border force “before it is born.”

In the Turkish border town of Kilis, two people were also killed and another 13 wounded from a rocket launched across from Syria, according to town’s governor.

Russian Foreign Mminister Sergey Lavrov also discussed with Turkey preparations for the upcoming Sochi peace talks Jan. 29-30, according to official statements. Analysts have suggested that Russia made a deal with Turkey to OK the current assault and withdraw troops, in response to Ankara’s participation in the talks.

Russia has been accused of undermining the U.N.-backed peace talks in Geneva, which failed to progress last year after a previous eight rounds.

U.N. special envoy for Syria Staffan de Mistura said that peace talks due to resume in Vienna Thursday were coming “at a very, very critical moment.”

“Definitely I am optimistic because it is the only way to be at such moments,” he added.

The talks were scheduled to be held in Vienna, rather than Geneva, due to “logistical reasons,” according to official statements.