Published June 26th, 2021 - 07:21 GMT
Russian President Vladimir Putin walks to attend the flower-laying ceremony at the Tomb of the Unknown Soldier to mark the 80th anniversary of the German invasion of the Soviet Union in WWII, in Alexander Garden in Moscow on June 22, 2021. Alexey NIKOLSKY / Sputnik / AFP
Highlights
European heavyweight Germany has strong economic interests there, notably the NordStream 2 undersea pipeline project. 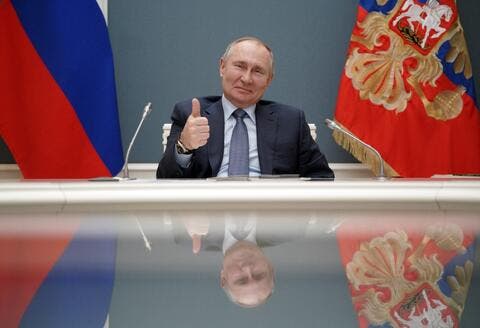 Putin is at the Gate of Gulf States!

It came after EU leaders said today that they wanted to 'explore formats and conditionalities of dialogue with Russia' - raising the prospect of high-level talks without actually committing to them.

But Lithuanian President Gitanas Nauseda, whose country is close to the Russian border, warned the bloc should remain 'very cautious about the real intentions of Putin's regime', likening deals with Putin to 'entrusting a bear to look after honey'.

'We have to deal with Russia, but being very cautious about the real intentions of Putin's regime,' he said at an EU summit in Brussels today.

'So far, we don't see any radical change in the pattern of behavior of Russia.

'If, without any positive changes in the behavior of Russia, we start to engage, it will send very uncertain and bad signals.

'It seems to me like we try to engage a bear to keep a pot of honey safe.'

The European Union is deeply divided in its approach to Moscow.

Russia is the EU's biggest natural gas supplier, and plays a key role in a series of international conflicts and issues linked to Europe's strategic interests, including the Iran nuclear deal, and conflicts in Syria and Libya.

Other countries, including France, are reluctant to continue waging a sanctions battle with Moscow that hurts trade - such as recent penalties imposed for the poisoning of opposition leader Alexei Navalny.

The EU is concerned that Putin is turning increasingly authoritarian and wants to distance himself from the West, with the EU and NATO struggling to bring Russia to the table amid a low-point in relations.

Biden's meeting in Geneva with Putin earlier this month was a rare exception to the icy silence of recent months, though the two men can hardly be said to have got along - breaking up talks early and giving separate press statements afterwards.

Estonia and Latvia, which directly border Russia, are also deeply concerned about reaching out to Moscow when the Minsk agreements meant to bring peace to Ukraine are still not being respected.

The agreements were signed in 2014, shortly after Russian annexed Crimea - a move that also prompted the west to impose sanctions.

'Right now, if it pans out the way it's proposed, Russia annexes Crimea, Russia wages war in Donbass, and Europe shrugs its shoulders and continues to try to speak a dialogue. The Kremlin does not understand this kind of politics,' said Latvian Prime Minister Krisjanis Karins.

His Estonian counterpart, Kaja Kallas, said that 'what our intelligence (service) tells us is that sanctions work and the European Union has to be more patient.'

But French President Emmanuel Macron said Europe cannot simply tackle its problems with Russia on a case-by-case basis, by continually imposing sanctions or other measures.

'We cannot continue without dialogue. We have to talk, including about our disagreements. It's the only way to resolve them,' Macron said. 'It's a dialogue that's necessary for the stability of the European continent, but demanding because we will not give up our interests and values.'

In Berlin, German Chancellor Angela Merkel told lawmakers that 'the events of recent months - not just in Germany - have clearly shown that it's not enough if we react to the multitude of Russian provocations in an uncoordinated way.'

'Instead, we have to create mechanisms to respond in a common and unified way to provocations' to what she described as 'hybrid attacks by Russia.' That includes outreach to countries such as Ukraine, Belarus and the western Balkans, but also engaging Russia and Putin directly.

The plan was welcomed in Moscow. Kremlin spokesman Dmitry Peskov said Putin supports the idea to restore 'the mechanism of direct contacts between Brussels and Moscow.'

'Putin has spoken about it many times,' Peskov said. 'Both Brussels and Moscow really need this dialogue.'

Ukraine, in contrast, was not so keen about the EU outreach.

'Initiatives to resume EU summits with Russia without seeing any progress from the Russian side will be a dangerous deviation from EU sanctions policy,' Ukraine Foreign Minister Dmytro Kuleba said in Brussels. 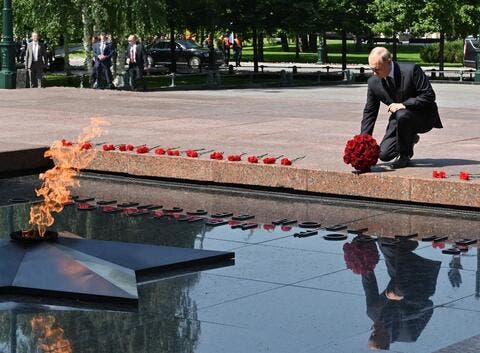 In the end, the leaders agreed to underline 'the need for a firm and coordinated response by the EU and its member states to any further malign, illegal and disruptive activity by Russia, making full use of all instruments at the EU's disposal.'

Despite the Franco-German push for talks, they invited the EU's executive branch and top diplomat 'to present options for additional restrictive measures, including economic sanctions.'