Published August 10th, 2021 - 05:21 GMT
A passenger shows her Covid-19 health pass on a mobile phone and her train ticket at Lyon rail station in Paris on August 9, 2021. From August 9, 2021, the health pass is compulsory to access most of the public spaces or to travel on an inter-city train. French railway company checks travellers before boarding and delivers them a single-use blue bracelet which allow them to access the platform. (Photo by GEOFFROY VAN DER HASSELT / AFP)
Highlights
Health pass measure to be enforced in restaurants, cafes, long-distance transport.

Restaurants, cafes, trains, and flights in France on Monday began enforcement of the controversial health pass initiative, despite vocal opposition to the measure, meant to reduce the spread of the Delta variant and avoid further lockdowns. 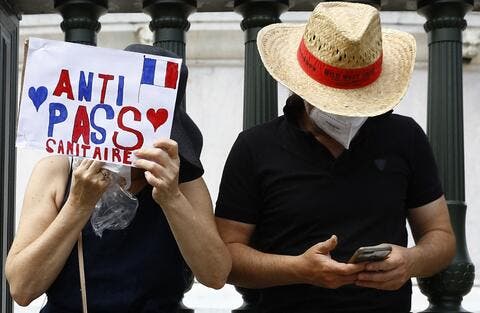 Day one of the measure saw major restaurants and cafes displaying notices saying "Please show your health pass," and trains and airlines issuing bracelets to passengers to show compliance with the passes.

France's coronavirus health pass has been imposed at cafes and train stations wIth very little drama, despite weeks of protests. https://t.co/2RaGQqU7jf

Transport Minister Jean-Baptiste Djebbari said that for now, about a quarter of trains will be monitored for the health passes, and in the coming days, the checks will be streamlined with pre-registration for commuters.

The health pass is proof of vaccination or a negative COVID-19 test result in a print or a digital format to be shown by all adults 18 and over for entry into public places until at least Nov. 15.

France is now requiring a health pass to enjoy activities such as going to a cafe or restaurant in the government's latest effort to control the spread of Covid-19 and encourage vaccinations. https://t.co/g60rXGYjNT

The government also announced certain concessions to make the restrictions easier for the general public to follow. It extended the period of a negative RT-PCR or antigen test to less than 72 hours instead of 48 hours. It also assured tolerance and flexibility in checks during the first week. 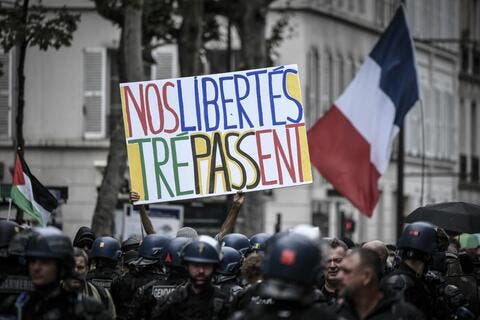 Nationwide Protests Continue in France Against The Health Pass

Failure to check the health pass by employers, owners, and service providers "more than three times in a period of 45 days" can result in fines of up to €9,000 ($10,570) and a year in prison.

The anti-COVID initiative was introduced to restrict unvaccinated people from accessing public places and spreading infections. Authorities fear if the health pass measure, along with increased mass vaccination, is not enforced, it could lead to a fourth wave of the pandemic due to the contagious Delta variant, leading to renewed lockdowns.