Published August 1st, 2021 - 08:04 GMT
A protester holds a sign reading 'Anti health pass' during a protest against the vaccination and the compulsory health pass called for by the French government, at Place de la Bastille, in Paris on July 24, 2021. Sameer Al-DOUMY / AFP
Highlights
Over 200,000 people demonstrate against new health laws likely to come into force from Aug. 9

France's anti-vaccine and anti-health pass rallies continued in France for the 3rd week in a row, amid rising COVID-19 cases. 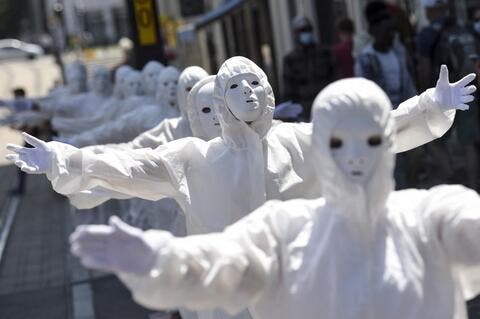 Saturday’s protests, according to the Interior Ministry, saw an estimated 184 rallies with 204,090 demonstrators across the country, a figure higher than the previous weeks.

In Paris alone, where at least four rallies were held, nearly 14,250 people marched to oppose the new health restrictions in public and social places introduced by the government for the unvaccinated people. At least 19 people were arrested including 10 in Paris, the ministry said.

The developments of increasing participation in the anti-health measures come in the backdrop of the government’s warning of a fourth wave and rising virus cases across the country. There were 23,471 new cases and 43 related deaths in the last 24 hours.

In Marseille, angry protesters attacked journalists from France 3 and BFMTV whereas in Paris two AFP reporters filming the rallies were targeted with insults and spitting, according to reports by BFMTV news.

At other places, protesters threw objects, stones at the police force and tried to light fires in trash cans. In return, police fired tear gas and water cannons at the crowd to disperse them.

The government has declared its intention to implement the new health law from Aug. 9. The law greenlighted by the parliament last week includes provisions of compulsory vaccination for healthcare professionals and isolation for COVID-19 patients along with extension of health pass for entry into places such as restaurants, cafes, and long-distance transport.
The government is awaiting final clearance from the country’s highest constitutional authority, the Constitutional Council, on whether the law oversteps the limits of public freedom.

Opposition leaders took to Twitter, calling the Macron administration to take note of the growing protests.

Socialist politician and leader of France Insoumise party Jean-Luc Melenchon said the health pass was a "false good idea" and the demonstrations must be “understood and respected.” 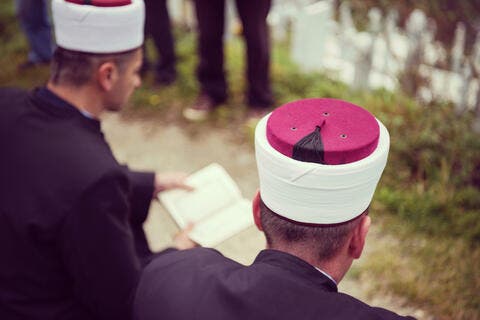 France braced for more protests against the upcoming special virus passes that will be needed to enter restaurants, as police took up posts along Paris’ Champs-Elysees to guard against rowdy demonstrators. Via @AP https://t.co/m9fGLtTAuV

Far right leader of National Rally, Marine Le Pen, said: “The government must listen to the legitimate concern expressed both on the effectiveness and on the infringements of liberty and equality,” over the health pass. She urged that “there is still time to take a step back.”

Syrian Journalist in Jordan Arrested and Threatened With Deportation