Published August 17th, 2021 - 06:08 GMT
A Palestinian girl mourns during the funeral of Raed Abu Seif and Saleh Ammar (R), two of four Palestinians killed in clashes with Israeli security forces earlier in the day, in the Jenin refugee camp in the north of the occupied West Bank on August 16, 2021. (Photo by JAAFAR ASHTIYEH / AFP)
Highlights
Hamas Calls for General Strike After Palestinians Killed in Jenin

The Palestinian resistance movement Hamas urged for a general strike after four young Palestinians  were shot to death by Israeli forces in a dawn raid in Jenin refugee camp in the occupied West Bank. 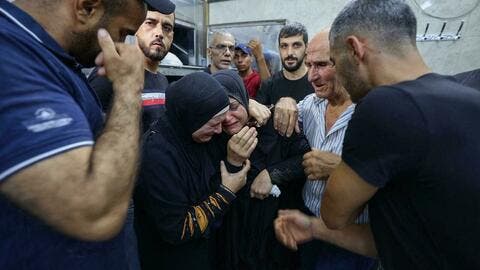 BREAKING | Four #Palestinian teenagers have been shot dead by the Israeli occupation forces in Jenin, north of the occupied West Bank. The four were identified as Nour Jarrar, Raed Abusaif, Amjad Hussainiya, and Saleh Ammar. pic.twitter.com/SuKtpAGqRO

The governor was cited as saying that the bodies of two of the victims – Husniyah and Jarrar – were seized by Israeli authorities before withdrawing from Jenin.

The raid on the city of Jenin and its refugee camp led to heavy clashes between the Israeli troops and Palestinian resistance fighters and local youths. Loud explosions and gun fire were heard, too.

“We mourn the martyrs of Jenin who died at dawn today after a heroic confrontation with the Israeli occupation forces who stormed the camp,” Hamas spokesman Hazem Qasem said in a press release later on Monday, before calling for a general strike across the occupied territories.

“This pure blood of the Jenin martyrs is the true guarantee for the liberation battle to continue until the occupation leaves our entire Palestinian land,” the Palestinian Information Center quoted him as saying.

The national and Islamic political forces in Jenin also declared a day of anger against the Israeli regime and a general strike in the city in mourning for the young Palestinians, the report added.

The groups also called on the residents of Jenin to take part in the funeral procession of martyrs Saleh Ammar and Ra’ed Abu Saif.

Jenin killings sign of insistence on resistance against Israel

The Palestinian resistance movement Islamic Jihad, for its part, also expressed condolences to the families of the victims and stressed that the killings were a clear sign of insistence by “revolutionaries of Jenin” and the whole West Bank on resistance against the occupying regime.

The Gaza-based movement also held the Zionist enemy fully responsible for the growing crimes against the Palestinians and their holy sites.

Islamic Jihad further called for a declaration of anger across the West Bank against Israel, urging Palestinians to stand united against the Zionist enemy, closing the door to any reconciliation attempt, and holding a general strike across the occupied region.

In a statement on Monday, the office of Palestinian President Mahmoud Abbas condemned the “heinous crime” in Jenin.

“We express the presidency's strong anger and condemnation of this heinous crime, and we affirm that the continuation of this Israeli policy will lead to an explosion in the situation and to more tension and instability,” said Nabil Abu Rudeineh, the official spokesman for the presidency.

He also held the Tel Aviv regime to account for this escalation and its repercussions, calling on the United States and the international community to pressure the regime to halt its attacks against the Palestinians.

Additionally, the Palestinian Foreign Ministry condemned the killing of the four Palestinians in the northern West Bank city.

“This crime is a preplanned and premeditated murder committed by the (Israeli) occupation forces to be added to a list of extrajudicial executions against our people,” it said.

The ministry also said that it intended to bring up the horrible crime with the International Criminal Court (ICC) in The Hague and other international bodies, as well as with Washington “in order for all parties to shoulder their responsibilities in bringing an end to the crimes of the occupation.”

The statement stressed that the silence of the world regarding this and other crimes indicated complicity with the crime and protection for the culprits. 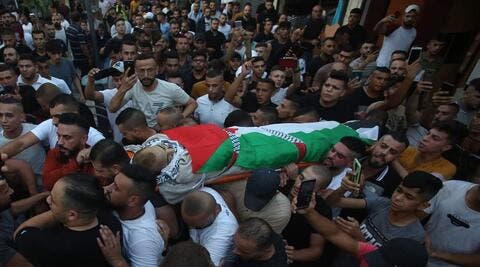 Separately, the ruling Fatah movement echoed the foreign ministry in condemning the killings.

“The heinous crime” committed in Jenin “confirms the extreme right-wing policy of the new government in Israel, which continues to murder, build settlements, demolish homes, and attempts to displace people,” said Hussein al-Sheikh, a member of the Central Committee of Abbas's ruling Fatah movement.