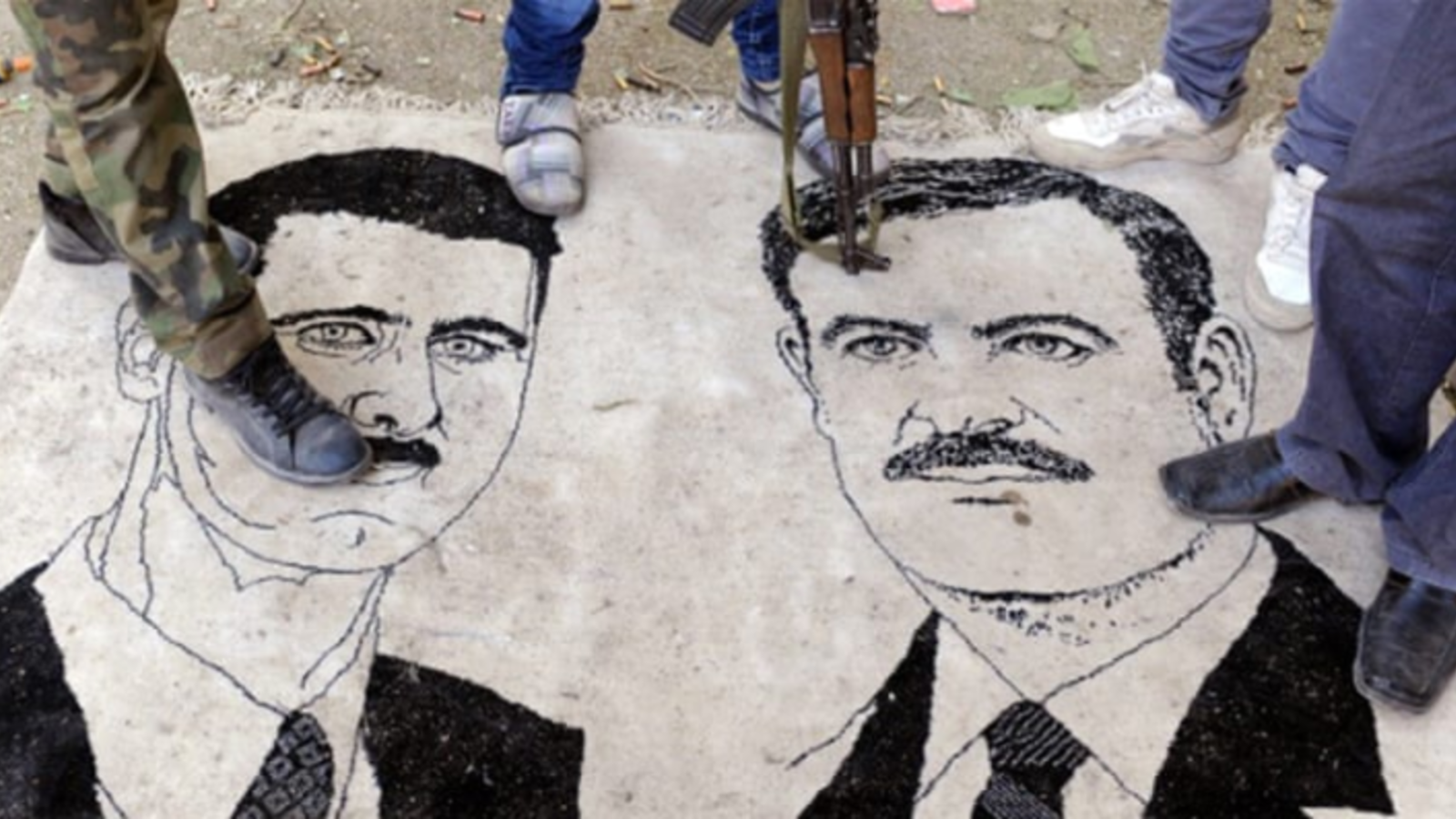 Assad and his late Father /AFP

Syrian President Bashar al-Assad, once thought to be on the way out from power in Syria, is now working to eliminate the last pockets of resistance around Syria’s capital, Damascus.

The countries that called for his departure in order to re-make the Syrian government have grown quiet as there appears to be no formidable or just opposition left to empower.

Assad is the emergent victor in the Syrian Civil War.

But what has received far less attention is the extant Assad went to ensure his regime’s survival. In giving more power to paramilitary groups, and relying almost entirely on Russia and Iran for support, Assad’s victory may be a Pyrrhic one, meaning he may win the war but essentially lose his sovereign control over Syria.

Experts who have studied Assad’s relationship to local militias and allying countries have pointed out the risk of a rising ‘warlordism,’ inside Syria whereby local militia commanders who are nominally loyal to Assad govern according to their own interests.

Assad, who has long had no choice but to rely on unofficial paramilitaries for help, will eventually have to embark down the long road of reigning in local commanders and outside powers’ interests, which will likely require concessions to his ability to unilaterally control his own military and policy decisions.

An Iranian proxy militias suspected of recruiting from Afghanistan (AFP/FILE)

When the Arab Spring-inspired protests began in Syria, Assad sought to silence the movement with the force of the Syrian Arab Army (SAA), just as his father, Hafez al-Assad, had done to quell a rebellion against him in 1982.

But while Hafez al-Assad was able to put down the attempted revolt using a massive, swift show of force that killed up to 40,000 people in less than a month, Bashar’s attempts to do the same was met with nationwide outrage that boiled over into an armed resistance movement.

A civil war began, and defections from the SAA began bleeding his military numbers. From a pre-war count of about 300,000 personnel, Assad’s official army dwindled to a total between 80,000 - 100,000. His armored divisions, once one of the most formidable and largest in the world, lost between 200 and 500 vehicles a year. Defections to the opposition ran rampant, desertion became nearly uncontrollable, and losses were steadily mounting.

The Assad family had long-relied on Alawite sect of Shia Islam to fill up the senior ranks in their regime military. Although they only make up about 12% of the country’s population, they constitute roughly 70-80% of career soldiers. But after years of Sunni defections from the military and Alawite deaths on the battlefield, even they became draft-dodgers and refused to serve in his army.

Assad was losing his army, fast.

Knowing he could not hold onto power by relying on his official military, Assad facilitated the creation of paramilitary groups, or loyalist militias. These militias, such as the Desert Hawks or the organized crime syndicate, the shabiha, or ghosts, buttressed his struggling armed forces.

Still in force, many militias often recruit from the local townships where they have a presence, tying them more firmly to the territory they control. They represent a vast array of ethnic, ideological and material interests.

One of the biggest paramilitary groups is the National Defense Forces (NDF), which draws commanders from local areas and has roughly 100,000 soldiers. Iran is one of its biggest funders. More broadly, Iran funds much of the Syrian paramilitaries.

The Iranian-backed Hezbollah has also maintained a consistent ground presence since nearly the beginning of the war.

But even with Iranian funding, logistical support, and boots on the ground, Assad was caught in a stalemate with the opposition. Iranian-backed militias may actually out-number the number SAA soldiers.

So he turned to Russia for support.

In late Sept. of 2015, Russia began intervening militarily on Assad’s behalf, and has relentlessly bombed targets throughout Syria ever since. Russia effectively turned the tide for the war, and has ensured Assad remain in power. But Russian and Iranian involvement has strings attached; conditions that may hamper Assad’s ability to rule without their input.

A soldier inside Syria (AFP/FILE)

In his desperation to save his regime, Assad may have given life to a new set of local and international rulers that he will have difficulty controlling.

“The pre-war centrality of Assad's power changed early on in the Syrian war; whereas before all decisions big and small ran through Damascus the situation now is much more decentralized and more akin to a feudal empire,” said security analyst Nick Grinstead in an interview for Al Bawaba.

“Today the big decisions are made or approved by Assad and his inner circle but many matters regarding local governance and, in some instances security, have been farmed out to the regional or local level. Issues of water management and sanitation, for example, have been largely left up to local council across much of regime-held territory. In addition, security provision away from the frontlines has been farmed out to loyalist militias such as the NDF and Eagles of Whirlwind,” Grinstead added.

In addition, Assad has granted many militias a relatively large amount of autonomy so long as they do not directly challenge his rule. Because his army is still spread thin around all of Syria, Assad simply cannot afford to assert power over militia-held territory.

“The NDF has become central to Assad’s survival strategy, but while it officially operates under the regime’s control, its localized character has created new centers of authority and local powerbrokers,” argues Chris Zambelis, a security analyst for the Middle East.

These militias operating under the umbrella of the NDF, have clashed with each other over territorial control and will not likely cede power to Assad without demanding major concessions that would limit Assad’s ability to govern those areas centrally.

Although he has succeeded in disbanding militias that sought to offset Assad’s powers directly, like the Desert Hawks, some groups have direct ties to Iran, making them much more formidable to Assad and thus much less subordinate to his regime.

According to Grinstead, Russia appears far more willing to see paramilitary groups integrate into Assad’s post-war military. Satisfied that it has access to a warm-water port on the Mediterranean Sea and indefinite military installations inside Syria, Russia will be satisfied to see Assad remain a central power-holder.

Iran, on the other hand, wants a bigger piece of the regime pie.

For an example of how Iran organizes its proxy militias in relation to official armies, Iraq is a helpful analogy to what may happen in Syria.

A soldiers from the Iranian-backed PMU in Iraq (AFP/FILE)

After ISIS began its blitzkrieg through the deserts of northern Syria and Iraq, Iran reacted by forming the Popular Mobilization Forces (PMU), a mostly Shia militia group led by Iranian commanders. They, in conjunction with Kurdish fighters, fought ISIS back and steadily won back much of Iraq.

Once ISIS was all but beaten, former U.S. Secretary of State Rex Tillerson called for their disbandment as he claimed it was an Iranian violation of Iraqi sovereignty to have Iranian militias running rampant throughout the country and governing territory. In response, Iraqi Prime Minister Haider al-Abadi defended the PMU and formally integrated it into Iraq’s military.

In essence, al-Abadi legalized Iran’s command over much of the Iraq army, making permanent and official Iranian influence in the country’s politics. Iran will likely push Assad to do the same, compelling him to formally integrate Iranian-backed militias into Assad’s post-war military.

This would guarantee that Iran has a dominant presence in the country and that part of Assad’s mandate as Syria leader would come from Iran. Decisions then, will need to go through Damascus and Tehran.

Assad may have in fact sacrificed his position as sovereign leader of Syria at the outset of the war, when he called on Iran for help.

“Assad sacrificed Syria's absolute sovereignty early on in the war when he permitted Iranian security officials to advise on the suppression of the non-pro-Assad protests,” Grinstead said in an interview.

“From then on he has allowed greater Iranian involvement and the intervention of Hezbollah units and Russian military as a means to prevent the complete collapse of the Ba'ath regime to the pantheon of Islamist and rebel groups fighting against it. These friendly interventions… mean that these countries will have spheres of influence in Syria for the foreseeable future.”

This does not mean that Assad will be one of among many rulers governing Syria, but it does mean that in key decisions in structuring post-war Syria, he will likely need the consent of Russia, Iran and local militia leaders before continuing, dissipating his once central power to a number of local and international players.

For Syrians on the ground, Assad’s concessions will likely mean empowered militias will be free in conducting extortion activities from them, demanding money in exchange for protection, according to Grinstead.

As these militias transition from wartime mobilization to postwar local governance, community leaders will likely need their blessing in order to help govern civil society. Businesses may need to pay a portion of their revenues to these groups. They will likely be able to enforce their own set of laws, as is often the case in fragile post-war environments.

In making sure he remained as President of Syria, Assad has transformed Syria into a kind of client-state for Russia, Iran and local militias that utterly dependent upon them for support.