How Did Russia Manage to Intervene Around The World?

Published January 9th, 2022 - 12:06 GMT
Russia's President Vladimir Putin listens to the report on the autumn-winter heating season at the Konstantin Palace presidential residence in Strelna, outside St. Petersburg, on December 29, 2021. (Photo by Alexey NIKOLSKY / RIA NOVOSTI / AFP)
Highlights
Russia has perfected and surprised its foes in equal measure in its ability to intervene around the world.

The latest crisis in Kazakhstan has resulted in Russia using a military organisation it leads to intervene in the country. But that’s not the only tool Russia has. 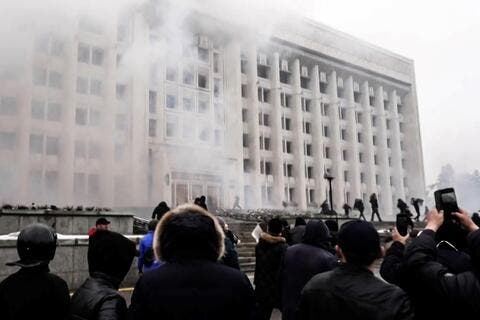 Over the last two decades, Russia has perfected and surprised its foes in equal measure in its ability to intervene around the world.

Perhaps no other country in the world, aside from the US, has militarily intervened in so many international conflicts in recent years to further its foreign policy objectives. And despite Russia’s relatively small economic footprint, 3 percent of global GDP, it continues to be a military force to be reckoned with.

Russian forces now surround Ukraine on three sides — about 100,000 troops, according to Ukrainian and Western officials. See where, and why Western officials fear a military operation could start as soon as this month. https://t.co/pp9cHGz2cs

But Russia’s military intervention toolkit is bespoke and one that uniquely reflects its economic and political limits.

Here are some of the ways that Russia intervenes around the world to protect its interests.

The most recent intervention was in Kazakhstan where protests triggered by a 100 percent gas price hike on liquefied petroleum gas (LPG), widely used by citizens to run their cars, has resulted in widespread protests across the country.

The political turmoil currently sweeping the country has also led to violence resulting in the resignation of the Kazakh government under President Qasim Zhomart Tokayev.

The measures have failed to persuade people to go home. As the government’s grip on power has waned, the country’s leadership has asked for help from the Collective Security Treaty Organization (CSTO), a Russia-led military bloc.

The CSTO has its roots in the former Soviet Union and, after its breakup, evolved into a military alliance by 2002 with Russia as its central and most powerful member.

Now, for the first time in its 30-year history, CSTO members - Russia, Armenia, Kazakhstan, Kyrgyzstan, Tajikistan, and Uzbekistan - have agreed to send “peacekeepers” in a bid to reinforce the authority of politicians in Nur-Sultan, Kazakhstan’s capital.

The CSTO, in many ways, reflects Russia’s security interests in its neighbourhood and an attempt to consolidate a sphere of influence. The military alliance, amongst other things, ensures that members of the CSTO can not join other military alliances - a reference to NATO, the western military bloc led by the US.

It also states, amongst other things, that any third country's military bases need the approval of all member states and that if a foreign power attacks a member, they will come to the aid of one another.

That fear of encirclement by Western powers, in particular the US, also drives Russian actions in another post-Soviet country - Ukraine.

When soldiers without insignias on their green uniforms seized control of Crimean territory in Ukraine in 2014, Russian officials denied having any knowledge of them.

Russian President Vladimir Putin at the time said that the men were local self-defence units.

It quickly emerged that these soldiers, which locals referred to as “little green men” - were part of elite Russian forces that quickly took over government buildings, establishing facts on the ground - before anyone could establish on whose behalf they were acting.

Russia seized Crimea, a peninsula jutting out into the Black Sea, after it feared the government in Ukraine was turning against Moscow and could establish military relations with NATO - a move Putin has called a "red line" for the country.

In Crimea - Russia also has the large Sevastopol naval base, which allows it to project power across the Black Sea, a base it could have otherwise lost.

In eastern Ukraine, however, Russia adopted a different strategy - there would be no more “little green men.”

With Russia's troops threatening further invasion of Ukraine, a brief review of Russia's refusal to meet its obligations under the Minsk agreements. pic.twitter.com/61sBga8Cf0

As Russia deployed elite military commando’s in one part of Ukraine and eventually incorporating Crimea within Russia, an internationally contested move, in the east of the country it created and funded militias to fight against the Ukrainian government.

For Russia, Ukraine holds deep social and cultural importance. It also is wary that the country, which shares a border with Europe, could move out of its orbit of influence.

Moscow has demanded guarantees for years that its neighbour will never join NATO, reassurances that the US has failed to provide.

Since 2014 the eastern region of the country, in the region of Donbas, has been immersed in a low-level war between Russian speaking separatists backed by Moscow and Ukrainian authorities.

To date, the conflict has left more than 14,00o dead and a stalemate. Moreover, the war has paralysed the country and dashed any hopes in Washington that the country could join NATO.

Further afield Russia has sought to defend its interest using other means.

As the Assad regime in Syria teetered on the edge of collapse in 2014 as revolutionaries sought to overthrow the government, Russia was also on the verge of losing its oldest Middle Eastern ally and its only naval military port in the Mediterranean.

On September 30, 2015, Russia formally entered the Syrian civil war. Intense fighting and mass desertions between Assad’s army and the rebels had left Syria’s Military in tatters.

Russia’s intervention in the country - at the request of the Assad regime - stopped the advance of the opposition, which was backed by the West, Turkiye and the Gulf.

It also led to a more assertive Assad regime being able to retake lost territory in Syria with the backing of Russian airpower.

Russia’s intervention in the war was by far its most conventional, but the rise of a new force also accompanied it. This paramilitary force operated unofficially on the ground in Syria but in close contact with Russian authorities. This was, of course, the Wagner Group.

Backing the paramilitary outfit is Yevgeny Prigozhin, widely believed to be a close associate of Putin.

The Wagner group was first seen operating in 2014 in Ukraine, backing local militias, and since then has become an outfit seen in conflict regions including Syria, Mozambique, Libya, Sudan, and the Central African Republic.

Closely connected to the country’s military and intelligence, the Wagner Group provides Russia with influence in faraway places without the expensive and politically difficult visibility of military bases in other countries. 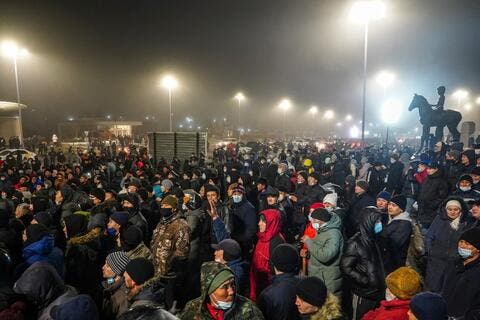 As a proxy organisation, it has become a cheaper way for Russia to build influence and shape events while also denying involvement.

Russia has become adept in recent years at deploying an array of different resources to leverage an economically bad hand and its post-Soviet-diminished power status. Moscow’s latest involvement in Kazakhstan means that the country continues to use different mechanisms to ensure that it can exert power close to home and in faraway places.