How Do You Breathe Life Into The Nile Dam Impasse?

Published March 10th, 2022 - 11:34 GMT
Ethiopia began generating electricity from its mega-dam on the Blue Nile on Sunday, a milestone in the controversial multi-billion dollar project. (Photo by Amanuel SILESHI / AFP)
Highlights
Ethiopia’s decision to unilaterally start operating the dam on the Blue Nile was a violation of a declaration of principles

Egypt and Sudan have called on Ethiopia to join them in “serious” mediated negotiations aimed at resolving an impasse over a giant Nile dam scheme. 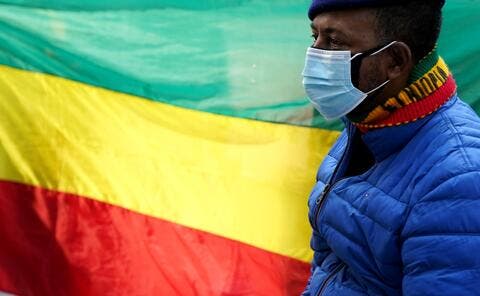 The two nations want Addis Ababa to engage in tripartite talks on the Grand Ethiopian Renaissance Dam project as soon as possible.

In a joint statement following a meeting in Cairo on Wednesday, Egyptian Foreign Minister Sameh Shoukry and his Sudanese counterpart Ali Al-Sadiq, highlighted “the importance of continuing to seek serious negotiations under the auspices of the presidency of the African Union on the renaissance dam, so that this leads to a binding legal agreement that achieves the interests of the three countries.”

Shoukry and Al-Sadiq’s talks were held on the sidelines of the ministerial meeting of the Arab League in Cairo.

During their meeting they discussed ways to further strengthen bilateral relations between the two countries in all fields and coordinate their positions on regional and international issues.

The ministers also agreed on “the importance of preserving Sudan’s unity, integrity, and sovereignty over its lands, with an emphasis on supporting the ongoing efforts aimed at achieving sustainable stability in the country.”

Egypt said recently that Ethiopia’s decision to unilaterally start operating the dam on the Blue Nile was a violation of a declaration of principles signed in 2015 by Ethiopian Prime Minister Abiy Ahmed.

Cairo’s comments followed Ahmed’s inauguration of the first phase of electricity generation from the dam during a ceremony attended by dozens of officials and members of parliament.

Egypt, Sudan, and Ethiopia have been negotiating since 2011 to reach an agreement on filling and operating the dam, but long rounds of negotiations have so far failed to reach a settlement.