Published July 26th, 2021 - 06:39 GMT
A picture taken early on July 26, 2021, shows a view of Gaza city at night. Israel hit Gaza with air strikes on July 25, after incendiary balloons launched from the Palestinian enclave caused fires in the Jewish state, with no reported injuries on either side. MOHAMMED ABED / AFP
Highlights
No casualties reported so far following military sites' attack by Israel. 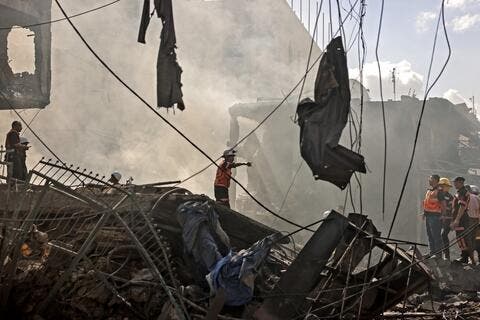 An Anadolu Agency correspondent in Gaza reported that Israeli fighter jets bombed a site in Khan Younis in the southern Gaza Strip and another one in northern Gaza.

The Health Ministry in Gaza has not reported any casualties so far.

Early on Sunday, Israel decided to decrease the fishing zone for Palestinian fishermen in Gaza from 12 nautical miles to 6 nautical miles in response to what it said was the launching of incendiary balloons on Israeli border areas with Gaza which caused fires in three locations, according to the Israeli daily Yedioth Ahronoth.

IDF: several buildings in a Hamas military base, as well as unspecified “infrastructure and utilities used for activities” of the terror group were struck overnight in response to the incendiary balloons launched from Gaza towards Israel yesterday

The incendiary balloons or kites contain flammable materials or oil-soaked rags that may ignite fires once landing on crops or dried plants.