Published May 11th, 2021 - 06:36 GMT
A Palestinian boy looks out of a damaged window following an Israeli airstrike at al-Shati Refugee Camp in Gaza City, early on May 11, 2021. Israel launched deadly air strikes on Gaza in response to a barrage of rockets fired by the Islamist movement Hamas amid spiralling violence sparked by unrest at Jerusalem's Al-Aqsa Mosque compound. MOHAMMED ABED / AFP
Highlights
At least 9 kids were killed in Israeli airstrike on Gaza.

The number of people killed in an Israeli airstrike today on the northern Gaza Strip was put at 20, including nine children, according to the Health Ministry in Gaza. 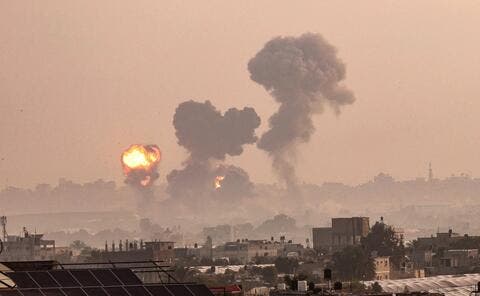 An Israeli drone fired missiles at a group of people east of Beit Hanoun, killing 20, among them nine children, and injuring 65 others, three of them critical.

The US Administration has “serious concerns about the situation” in Jerusalem, White House press secretary Jen Psaki said.

UN Security Council holds a closed-door meeting to discuss the escalation in Jerusalem.

Israeli forces have carried out several airstrikes in Northern Gaza.

The photos from #Gaza are horrifying. The bodies of the children on the hospital bed, bloodied and so small. I will not share them, these lives are so much more than images prodding the world to hold Israel accountable. #Palestine #SaveSheikhJarrah

Gaza’s Health Ministry said that at least nine Palestinians were killed by Israeli airstrikes. Three of those killed are children.

Hamas said it fired rockets at Israel, in a response to the injury of more than 300 Palestinians following a raid by Israeli police on the Al-Aqsa Mosque compound.

Hamas had given Israel an ultimatum to stand down its forces at al Aqsa and another Jerusalem flashpoint by 6 p.m. (GMT+3).

Turkey called Israel an “apartheid state” that must end “heinous and cruel attacks” against Palestinians.

“To humanity, we say: It’s time to put this apartheid state in its place!”

The violence in Jerusalem was “an attack on all Muslims”, Erdogan added, and “protecting the honor of Jerusalem is a duty for every Muslim.”

At least 305 people have been wounded during the Israeli raid of Al Aqsa Mosque compound and the surrounding areas in occupied East Jerusalem’s Old City, the Palestinian Red Crescent said.

About 228 have been transferred to three hospitals in occupied East Jerusalem, and seven are in critical condition.

Red Crescent is reporting that Israeli forces have wounded hundreds of Palestinians at Al Aqsa, at least 50 of whom have been transferred to the hospital. Six journalists have also been injured.

The Palestinian Red Crescent said the police refused to allow its crews to enter the walled Al-Aqsa Mosque compound to evacuate the wounded.

In an act of provocation, hundreds of Jewish settlers march from the East Jerusalem neighborhood of Sheikh Jarrah to Al-Aqsa.

Israeli Supreme Cort postponed the hearing on planned evictions of Palestinian families from their homes in the Jerusalem neighborhood of Sheikh Jarrah.

Israeli attorney-general Avichai Mandelblit asked the court for a deferral of two weeks so he might weigh taking part in the case, according to the Justice Ministry spokesman.

The Tunisian Ministry of Foreign Affairs has declared that under the directions of President of the republic Kais Saied, Tunisia, as an Arab member of the UN Security Council, asked in coordination with the Palestinian side and backed by China, the current President of the Council, Norway, Ireland, Vietnam, Saint Vincent, The Grenadines and Niger, the holding of a UN Security Council session on May 10, 2021.

At least 90 Palestinians were injured as Israeli occupation forces clamped down on thousands of worshipers attending or in their way to attend prayers at the Al-Aqsa Mosque compound in occupied Jerusalem, according to the Palestinian Red Crescent (PRC).

Belgium in a statement expressed extreme concern over the escalation of tensions in East Jerusalem.

“The violence on Haram al-Sharif/Temple Mount is unacceptable. The Status Quo on the holy site must be respected,” said the statement.

Israeli police attacked today evening Palestinians present near Bab Huta, one of the gates leading to the Al-Aqsa Mosque compound, injuring a youth, according to witnesses.

Witnesses said Israeli police fired stun grenades towards Palestinians in the vicinity of Bab Hatta, injuring a youth and detaining another.

At least 25 Palestinians were detained by Israeli occupation forces in the occupied capital Jerusalem in an ongoing detention campaign that started last night, according to the Palestinian Prisoner’s Society (PPS).

Palestine’s Ambassador to Egypt and Permanent Representative to the Arab League Diab al-Louh said today that at the orders of President Mahmoud Abbas, the State of Palestine requested today an urgent meeting of the Arab League at the level of permanent representatives to discuss the latest Israeli violence in Jerusalem.

Minister of Foreign Affairs and Expatriates Riyad al-Malki met today with his Turkish counterpart, Mevlüt Çavuşoğlu, in Ankara, where they discussed the latest political developments, including the recent Israeli violations against the Palestinian people, particularly in occupied East Jerusalem.

Malki stressed that Israel’s attacks against the al-Aqsa mosque require prompt actions by the international community to protect Palestinians in Jerusalem.

The two ministers agreed on urgent coordination and follow-up of all these issues, whether by calling for an urgent meeting of the Organization of Islamic Cooperation or the Jerusalem Committee.

“The European Union calls on the authorities to act urgently to de-escalate the current tensions in Jerusalem,” said EU spokesperson, demanding respect for the status quo following “Israeli” raid into al-Aqsa Mosque.

Qatar condemned the Israeli police’s “storming” of the Al-Aqsa Mosque compound and the “attack on worshippers”.

Hamas had earlier warned of a response to Israeli attacks in Al-Aqsa Mosque compound. pic.twitter.com/llNSr4Z72O

In a statement, the foreign ministry said it was a “provocation to the feelings of millions of Muslims around the world, and a severe violation of human rights and international accords”.

Qatar urged the international community to work to end “repeated Israeli aggression” against the Palestinians and Al-Aqsa.

Jordan, the custodian of Islamic sites in Jerusalem, said “Israel’s continuation of its illegal practices and provocative steps” in the city is a “dangerous game”.

“Building and expanding settlements, confiscating lands, demolishing homes and deporting Palestinians from their homes are illegal practices that perpetuate the occupation and undermine the chances of achieving a just and comprehensive peace, which is a regional and international necessity,” Jordan’s Foreign Minister Ayman al-Safadi tweeted.

The United States said it was “deeply concerned” about the events and called on all sides to work to de-escalate them. It also expressed concern about the evictions.

“It’s critical to avoid unilateral steps that would exacerbate tensions or take us further away from peace. And that would include evictions, settlement activity, and home demolitions,” US State Department spokeswoman Jalina Porter told reporters in Washington.

Israeli forces fire bombs at a clinic full of doctors and patients inside the Al-Aqsa Mosque compound.

Over 200 Palestinians were injured as Israeli occupation police broke into the courtyards of the Al-Aqsa Mosque in the Old City of occupied Jerusalem, according to witnesses.

Police officers fired rubber-coated rounds and stun grenades at hundreds of worshipers attending night prayers at the compound, injuring at least 53 of them. The injuries were reportedly focused on the eyes and heads. 23 of the wounded were moved to the hospital for medical treatment, while the remainder were treated at the scene by local medics.

Dozens of worshipers were also arrested by the attacking forces.

The UN’s rights office urges Israel to call off any forced evictions and warned its actions could amount to “war crimes”.

Fifteen Palestinians are arrested in East Jerusalem as Israeli police responded with brute force to protests being held against the forced eviction of Palestinian residents.

The Israeli Supreme Court postpones its ruling on the eviction of several Palestinian families from the occupied East Jerusalem neighborhood of Sheikh Jarrah, amid high tensions in the city.

Another hearing will be held on May 10.

Palestinian families reject the “deal” with the Jewish settlers.

Following an Israeli Supreme Court decision last February, at least six families have been ordered to vacate their homes located in the East Jerusalem neighborhood of Sheikh Jarrah by May 2.

The same court ruled seven other families should leave their homes by August 1. In total, 58 people, including 17 children, are set to be forcibly displaced to make way for Israeli settlers. 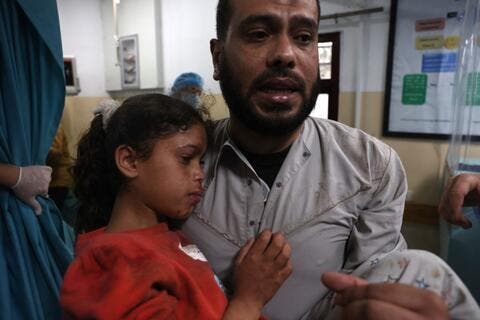