Published August 22nd, 2021 - 10:19 GMT
Palestinian demonstrators look on during clashes with Israeli forces following a demonstration by Palestinian protesters against the Israeli outpost of Eviatar in the village of Beita, north of the occupied West Bank, on August 20, 2021. (Photo by JAAFAR ASHTIYEH / AFP)

Israeli forces attacked a team of Palestinian technicians from the Land Settlement Authority while they were surveying land in Masafer Yatta in the occupied West Bank, local new agency WAFA said. 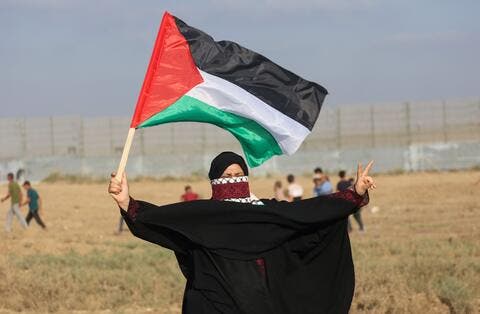 Israeli occupation forces clamp down on Palestinians holding a nonviolent protest in Masafer Yatta, south of Hebron in the occupied West, against the Israeli colonial settlement activities, today. pic.twitter.com/3fvHpyVDeQ

Fouad al-Imour, from the Protection and Steadfastness Committee in Masafer Yatta and the South Hebron Hills, told WAFA that Israeli soldiers fired teargas canisters at the surveyors while they were working near the illegal Avigal settlement, built on Palestinian land, in the Umm al-Shaqhan area, east of Yatta.

Al-Imour said the staff suffered from tear gas suffocation and were treated at the location.

Israel does not allow Palestinians to work in Area C of the occupied West Bank, which is under full Israeli military control.