Jordan King, US President Meet in The White House

Published July 21st, 2021 - 05:57 GMT
Supporters of Jordan's King Abdullah II are seen on Pennsylvania Avenue outside the White House before the leader's visit with US President Joe Biden on July 19, 2021, in Washington, DC. Brendan Smialowski / AFP

Jordanian King Abdullah and US President Joe Biden on Monday met at the White House. Both leaders have emphasis on the deep-rooted ties between Jordan and the United States, as well as their keenness to advance them across various areas. 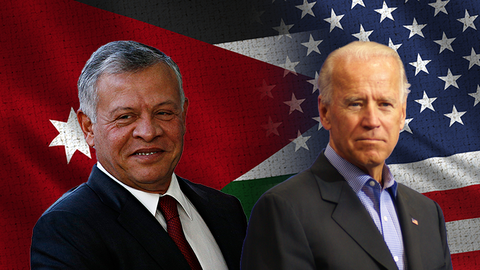 Jordanian Diplomacy in The White House

The summit covered expanding the strategic partnership between Jordan and the United States, and regional and international developments, foremost of which is the Palestinian cause, according to a Royal Court statement.

In remarks at the top of the bilateral meeting, attended by HRH Crown Prince Hussein, King Abdullah thanked President Biden.

“Thank you as always for the kindness that you have shown me. And, as you alluded to, I have had the honour and privilege of knowing you with my father decades ago. And so, this is very warming for me to be able to see you in this position and to thank you for the generosity you always have shown me and my country,” His Majesty said.

The King also thanked the United States for providing Jordan with a shipment of COVID-19 vaccines.

“You alluded to supporting us with vaccines, so on behalf of Jordan, the people of Jordan, thank you so much for the leadership, Sir, not only in supporting our country, but in fighting COVID internationally. You have set the standard for the rest of us to follow,” the King added.

“We come together as always as strong partners. We have, as you said, many challenges in our part of the world. But you can always count on me, my country, and many of our colleagues in the region.” His Majesty continued.

For his part, President Biden stressed the United States’ support for Jordan. “You have always been there, and we will always be there for Jordan,” he said.

“Also want to thank you for your vital leadership in the Middle East. You live in a tough neighbourhood, and, the fact is, I look forward to hearing from His Majesty about the pressing challenges that Jordan faces,” the president added, expressing readiness to continue strengthening bilateral cooperation.

President Biden also noted the long-standing relationship with His Majesty. “I want to welcome back to the White House a good, loyal, and decent friend, His Majesty. We have been hanging out together for a long time. I met him back when he was in the situation his son is in when his father was alive, and I was a young senator.”

The president thanked the King for his “enduring and strategic relationship with the United States”.

“We had the opportunity to speak for just a moment in the diplomatic room… and we talked about the COIVD crisis. We were able to be a little help to Jordan, and we hope to be able to help some more in this pandemic,” President Biden said.

In expanded talks that followed the bilateral meeting, the two leaders agreed to continue coordination between Jordan and the United States, in service of  their interests and international peace and security.

Discussions also covered developments in the region, especially in Jerusalem, with His Majesty stressing the need to preserve the historical and legal status quo in the city, especially at Al Haram Al Sharif, stressing that Jordan will persist in undertaking its unwavering historical and religious role in safeguarding Islamic and Christian holy sites in Jerusalem, in line with the Hashemite Custodianship.

Two months after Gaza ceasefire, US is focused on preventing further crisis without a long-term strategy, say experts ⤵️ https://t.co/scFFJOZelD

The King stressed the need to relaunch serious and effective talks between the Palestinians and the Israelis, in order to achieve just and comprehensive peace, on the basis of the two-state solution, noting the importance of ensuring the Palestinian people gain their legitimate rights and establish their independent, sovereign, and viable state, on the 4 June 1967 lines, with East Jerusalem as its capital. His Majesty commended the US administrations positive steps on the Palestinian cause, and the resumption of support for UNRWA, with the provision of additional donations worth $136 million, with US support for this year reaching $318 million.

Highlighting regional developments, the King stressed the need to support Iraq's efforts in bolstering its security and stability.

The two leaders also discussed regional and international efforts to counter terrorism within a holistic approach, and means to reach political solutions to regional crises.