A tornado that ripped through a candle factory in Kentucky on Friday killed at least eight people working overnight, with one worker describing how she had to 'climb up out of the building' after she was buried under five feet of rubble. 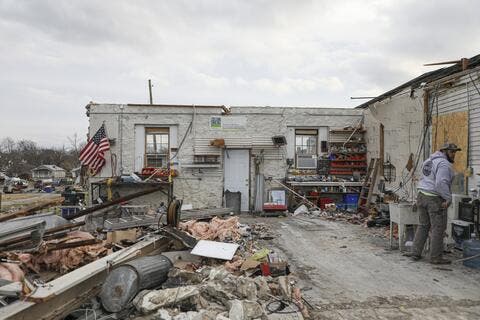 Eight workers are confirmed dead and another eight are missing after the natural disaster.

Inmates from the Graves County jail were among the 110 workers on the overnight shift on Friday.

'They had us in the area where you go in case there's a storm, and we were all there and then the lights got to flickering and all of a sudden we felt a gust of [wind], we could feel the wind and then my ears kind of started popping as they would as if you were on a plane.'

After they were rocked by the winds, Parsons-Perez said 'everything came down on us.' After that, she said, 'all you heard was screams.'

Forklift operator Mark Saxton saw the wind gust headed toward him when he opened a door at the Mayfield Consumer Products factory after the third tornado warning of the night.

Saxton, 37, headed for a tornado-safe hallway, but he didn't make it.

'Tiles and concrete started falling,' he recounted to NBC News. 'Walls imploded. 'Everyone started running, so I just dropped to the ground. I got in a fetal position and the concrete slab fell on top of me.'

Saxton says that at one point, he ended up on the collapsed roof of the factory.

He was eventually pulled from the debris with just scrapes on his arm and back. Back at his house, his wife fainted as the storm ripped away the roof and parts of the walls of his home.

Parsons-Perez, meanwhile, recalls inmates who worked at the factory as part of a work release program helping their fellow civilian workers get out from under the debris.

Parsons-Perez told Today that some of them 'were working their tails off to get us out.'

The factory was the third-biggest employer in Graves County, Kentucky. It was an important economic engine that churned out candles that lined the shelves of malls around the U.S.

But why its workers kept making candles Friday night as a tornado bore down on the region remains unclear as rescuers continue scouring the factory wreckage for signs of life.

What is known is that this was high season in Mayfield for turning out gift candles as Christmas approaches.

Shortly before the disaster, the company had posted on Facebook that it was looking to hire more people for 10-to-12-hour shifts involving fast-paced work and mandatory overtime.

Most American candle-makers used to complete their holiday orders by early November, but labor shortages and other economic trends tied to the COVID-19 pandemic have extended crunch time well into December, said Kathy LaVanier, CEO of Ohio-based Renegade Candle Company and a board member at the National Candle Association.

LaVanier said candle-makers around the US are horrified by what happened in Kentucky and are trying to find ways to help.

Unlike many manufactured products, most candles sold in the U.S. are American-made, in part thanks to hefty and longstanding tariffs on Chinese-made candles.

'All of us in the candle business are reeling,' she told the Associated Press. 'It could have been any of us.'

LaVanier said regular disaster drills are important at candle plants, especially to include temporary workers who might have just arrived to fill a demand surge. But the way they are built - rarely with basements, and structured to accommodate long manufacturing lines - makes it hard to avoid damage when a truly devastating storm hits.

'If we had enough advance notice and felt it was severe enough you might send people home,' she said.

Kentucky's governor said Sunday the ferocity of the storm was so great that there was nowhere safe to hide inside the plant.

'It appears most were sheltering in the place they were told to shelter,' Gov. Andy Beshear said. 'I hope that area was as safe as it could be, but this thing got hit directly by the strongest tornado we could have possibly imagined.'

A company spokesperson said Sunday that eight of the 110 workers on the overnight shift Friday are confirmed dead and another eight are missing. More than 90 have now been accounted for, making the death toll lower than some had feared hours earlier.

'Many of the employees were gathered in the tornado shelter and after the storm was over they left the plant and went to their homes,' said Bob Ferguson, the company spokesperson. 'With the power out and no landline they were hard to reach initially.'

Workers said they had been told to huddle in a central hallway area, the strongest part of the building, as the storm approached. Some had already left earlier in the night following a warning siren, they said.

On Saturday, Bryanna Travis, 19, and Jarred Holmes, 20, stood vigil near the rubble of the Mayfield candle factory where they had worked for months, usually for about $14.50 an hour. The engaged couple wasn't working when the storm hit.

Holmes said there had been no drills during their time at the factory to prepare people in case of a storm.

'We haven't had one since we’ve been there,' he said.

Ferguson, the company spokesperson, said drills were commonplace and workers followed the guidance when they found shelter.

'There were regular drills and the employees went to the shelter, which is an interior part of that building,' he said. 'They were there long enough even for attendance to be taken.' But, he said, the 'tornado was of such rare size and strength that' it had great destructive power.

'We have 110 people that worked the second shift the other night, making candles for some of the largest brands. This tornado came through with a force that was described in the earlier segment. It totally devastated this community,' Propes told host Trey Gowdy.

'Everyone was aware of bad weather, but, as we’re all taught even as children, the first thing we do is don’t get in your car. The management team that was at the factory that night, I praise them for doing an excellent job,' he said. 'I believe that more lives would have been lost. I know that ten minutes before they followed all the protocols to get the employees, almost all of the employees to the designated area.'

The factory employs many people in and around Mayfield, a city of about 10,000 in Kentucky's southwest corner.

It is Graves County's third-biggest employer, according to the county's website. Even some inmates at the county jail have worked there.

Police are hunting for one of the seven inmates who survived the tornado - one of 30 to rip through the state that night - escaped from the hospital the next day.

Staff at the Jackson Purchase Medical Center noticed that Francisco 'Cisco' Starks, 44, had absconded at about 5pm on Saturday.

He was serving time at Graves County Jail for third-degree burglary, theft of an automobile and receiving stolen property.

The corrections officer who was supervising Starks and seven other inmates him at the time, Robert Daniels, was killed in the collapse. Daniels was a cousin of Saxton, the forklift operator who survived the tornado.

Scented candles made from the Mayfield plant eventually found their way onto the shelves of prominent retailers like Bath & Body Works.

The Ohio retailer said in a statement it was 'devastated by the horrible loss of life at the Mayfield Consumer Products factory - a long-standing partner of ours.'

The company's founder, Mary Propes, in the mid-1990s 'literally started this in her garage and it grew to one of the largest candle-makers,' Ferguson said.

And this was high season in Mayfield for turning out gift candles as Christmas approaches. Shortly before the disaster, the company had posted on Facebook that it was looking to hire more people for 10- to 12-hour shifts involving fast-paced work and mandatory overtime.

The company said in a statement on its website that it had started an emergency fund to help employees and their families.

'We´re heartbroken about this, and our immediate efforts are to assist those affected by this terrible disaster,' CEO Troy Propes, the son of Mary Propes, said in the statement. 'Our company is family-owned and our employees, some who have worked with us for many years, are cherished.'

Kentucky´s state safety and health agency website lists a series of 12 safety violations at the factory in 2019, though it doesn´t say what they were for. Ferguson said it had to do with a worker's error involving a circuit breaker, which led to extensive safety trainings and a modest fine.

On Friday night, worker Autumn Kirks pulled down her safety goggles and took shelter, tossing aside wax and fragrance buckets to make room.

She glanced away from her boyfriend, Lannis Ward, and when she looked back, he was gone.

Kirks said she and her boyfriend were about 10 feet apart in a hallway when someone said to take cover. Suddenly, she saw sky and lightning where a wall had been, and Ward had vanished. 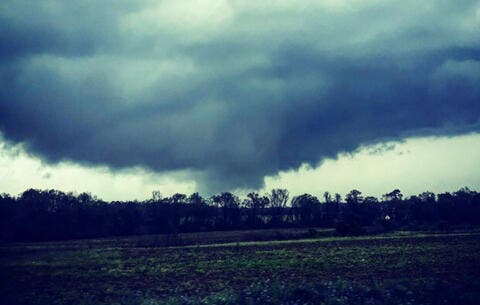 'I remember taking my eyes off of him for a second, and then he was gone,' she said.

Later, she got the terrible news - that Ward had been killed in the storm.

Decadent: For Iranians Neckties as a Symbol of Western Oppression

Bahrain Opens Largest Cathedral in The Gulf to Coincide With Christmas