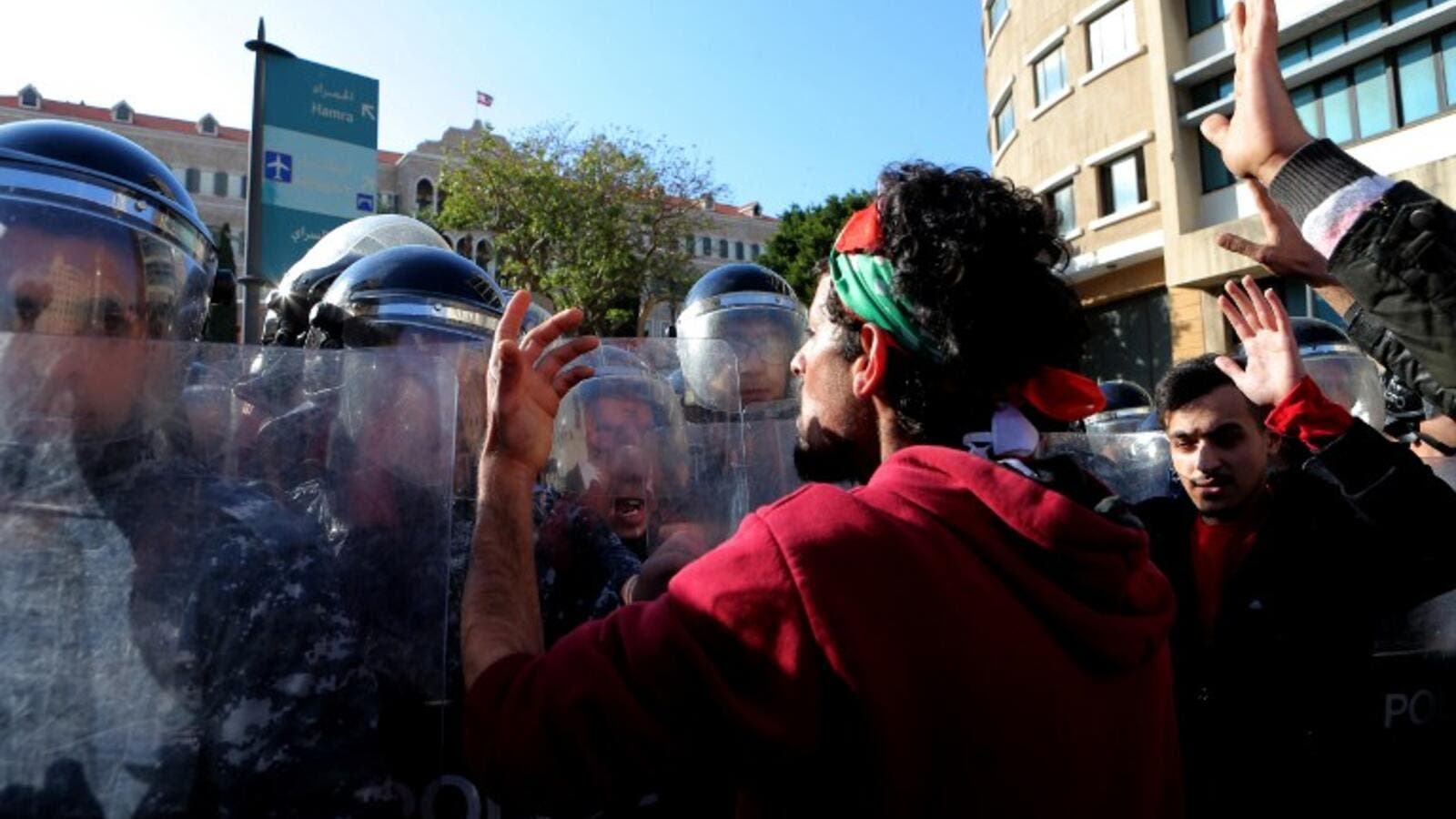 Lebanese demonstrators scuffle with riot police during a protest against the government's decision to raise taxes to cover a salary increase for teachers and other public servants, in downtown Beirut, on March 19, 2017. (AFP/Stringer)

Spurred by four days of anti-tax and anti-corruption street protests, senior officials, including Speaker Nabih Berri and Hezbollah chief Sayyed Hasan Nasrallah, called for refocusing attention on efforts to agree on a new electoral law with the three-month deadline for inviting voters to prepare for parliamentary elections, slated for May 21, drawing near.

A few thousand Lebanese flocked to Beirut’s Riad al-Solh Square at noon Sunday to protest Cabinet plans to impose a string of taxes to cover the cost of long-awaited salary increases for both civil servants and public school teachers estimated at $800 million.

Coming from various Lebanese areas, the protesters carried placards demanding the cancelation of the proposed taxes, putting a halt to corruption in the public administration and waste of public funds and implementation of the salary scale bill without the imposition of any additional taxes.

Although the protest was marked by minor scuffles with security forces deployed in central Beirut to prevent violence, the protesters dispersed peacefully Sunday evening after nearly six hours during which they shouted anti-government slogans, including calls for the toppling of the regime.There were calls on social media platforms for another protest and sit-in on Riad al-Solh Square at noon Wednesday to coincide with the weekly Cabinet session and probably a Parliament meeting to pursue discussions on the proposed taxes to finance the salary scale bill.

In an unprecedented gesture by any prime minister, Hariri joined the protesters in Riad al-Solh Square, seeking to assure them that their call for fighting corruption and stopping the squandering of public money would be implemented.

Addressing the protesters through a microphone, Hariri, flanked by bodyguards, said: “I have promised you to be transparent with you. God willing, you will see that this government, along with his excellency the president, will always be on your side and the side of the people’s pain.”

“It is true that there is waste of public money and corruption. But we will fight this corruption,” he said. “I wanted to come to you to tell you that we will God willing put an end to this kind of corruption and stop waste [of public money]. We will continue this march with you. This march will be long.”

However, defiant protesters responded by throwing plastic bottles at Hariri, who was not hurt as bodyguards fended off the objects.

Later, Hariri urged in a Twitter statement the organizers of the protest to form a committee to convey their demands and discuss them with him in “a positive spirit.”

Responding to Hariri’s call, the civil society group, You Stink, which spearheaded a fierce campaign against the government in 2015 over the garbage crisis, said: “We will not form a committee for dialogue [with Hariri] before the cancelation of the new taxes. Protests outside the Grand Serail will continue.”

The Cabinet is expected to meet this week after failing last Friday to endorse the draft budget, further delaying the final ratification by Parliament of the 2017 fiscal plan for the first time in 12 years. The Cabinet deliberations on the draft budget were overshadowed by a split among lawmakers over financing the salary hike bill that thwarted a Parliament session Thursday and put the bill into jeopardy.

Amid the confusion over the fate of the public sector’s salary scale motion caused by anti-tax street protests, Berri called for giving top priority to the approval of a new voting system to replace the disputed 1960 winner-take-all system.

He blasted what he called an “orchestrated campaign” against Parliament after differences emerged over taxes proposed to cover the salary hike bill.

“The purpose [of the campaign] is to scuttle an electoral law and the elections, too,” Berri said in a statement released by his media office Saturday. “Discussions were underway to agree on a new vote law. All of a sudden, attention shifted to the salary scale issue.”

Berri accused what he dubbed as “banking mafias” and “marine companies” of seeking to impede the funding of the salary scale bill from the proposed taxes.

Noting that the government must ensure revenues through the draft budget to fund the salary increases, the speaker stressed that efforts from now on should be geared toward giving priority to a new vote law, the appointment of a parliamentary investigation committee to uncover corruption and put corrupt people on trial, and the endorsement of the salary scale bill and the draft budget.

For his part, Nasrallah warned that time was running out for rivals to agree on a new vote law. He urged the feuding parties to make concessions in order to reach an agreement on a new electoral law to govern the upcoming parliamentary elections.

“Time is running out. Playing on the edge of the abyss is very dangerous. Some political powers are postponing [agreement on a vote law] until we reach the edge of the abyss. This game is very dangerous,” Nasrallah said in a televised speech Saturday. “We are presenting the Lebanese with three very bad options, [parliamentary] vacuum, extension [of Parliament’s term], or a return to the 1960 law.”

The Hezbollah chief called on rivals to work day and night to agree on a new electoral law, saying this law was vital for the country’s fate.

Meanwhile, Interior Minister Nouhad Machnouk has signed a new decree inviting voters to prepare for parliamentary elections. Machnouk sent the decree Saturday to Hariri, who will in turn sign it and forward it to President Michel Aoun, local media reported.

The minister had said Friday that if Aoun refused again to ink the decree, then the upcoming steps would be “decided accordingly.”

Machnouk last month signed a similar decree, which was also signed by Hariri, urging voters to take part in parliamentary elections set for May 21. Aoun, however, refused to ink the decree, insisting that an agreement on a new electoral law should be reached first.

Machnouk has said he expected a technical delay of the elections until an agreement is reached on a new vote law.

Rivals remain sharply split over what voting system to adopt for the upcoming elections. While the Free Patriotic Movement, Hezbollah and the Amal Movement support a proportional vote law, the Future Movement and the Lebanese Forces back a hybrid law that combines provisions of the proportional and majoritarian systems.