Published June 21st, 2021 - 05:29 GMT
French President Emmanuel Macron, wearing a mask, enters a polling booth as he votes at the polling station in Le Touquet, during the first round of the French regional elections on June 20, 2021. CHRISTIAN HARTMANN / POOL / AFP
Highlights
French voters voted in the first round of two-round regional elections on Sunday 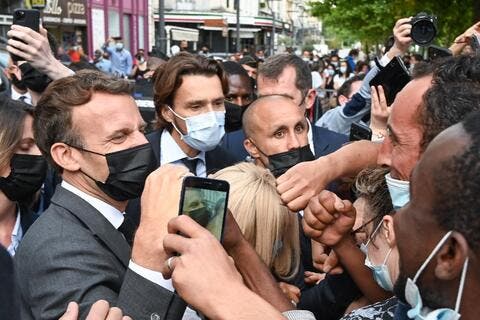 Macron's Republic on the Move (LREM) party failed to win more than 10 per cent of the vote in many regions, with the centrist Republicans outstripping it and Marine Le Pen's far-right National Rally (NR) party.

Conservatives claimed to have 'broken the jaw' of National Rally, whose leader was hoping to make huge gains across the country before challenging Macron in next year's presidential elections.

The parties of both Marine Le Pen and Emmanuel Macron failed to make major ground in the French regional elections, with centre-right Republicans on course to top the vote https://t.co/m6Rp0dZbdm

Exit polls on Sunday night following the first round of the two-round vote showed NR had taken only 19 per cent of the national vote - a nine per cent drop from the last regional elections in 2015.

A record low turnout saw less than one voter in three participate in the elections - a fact Le Pen blamed for her party's poor showing.

'Faced with the action of this government which is leading the country to chaos, our voters have a duty to react,' Le Pen said, in a bid to encourage NR supporters to take part in the second round of the vote next week.

'You must vote. If you do not vote for your ideas, your voice no longer counts. Everything is possible, as long as you decide: go to the polls, patriots!'

Xavier Bertrand, the Republicans candidate in the northern Hauts-de-France region, was on 44 per cent of the vote, ahead of the National Rally's Sébastien Chenu on 24 per cent on Sunday evening.

In a speech celebrating his move into the second round, Bertrand – who is also set to run for president – said: 'Five years ago we came second in the first round, but this time the inhabitants of Hauts-de-France have clearly placed us in the lead.

'I would like to thank those who have shown their confidence in us,' Bertrand said, adding that 'we have broken the jaw of the National Rally'.

Support for Macron's LREM was particularly low in Hauts-de-France.

But with a record low voter turnout of less than 35 per cent, Macron may at least find solace in the fact that the NR has not made any kind of breakthrough.

Low turnout normally favours extremist parties such as Le Pen's, but it did not work in her favour this time.

Macron went head-to-head with Le Pen when he won the presidential election of 2017, and will be hoping to do the same thing in 2022.

The second round of regional elections in France takes place next Sunday. 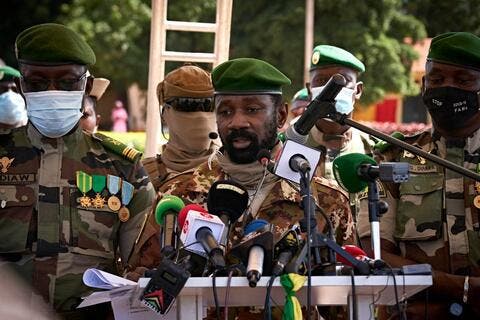 Beyond choosing regional councils, voters are also electing representatives to run more than 100 departements – the French equivalent of counties.