Published June 25th, 2021 - 04:53 GMT
Search and Rescue personnel pull a body out of the rubble after the partial collapse of the Champlain Towers South in Surfside, north of Miami Beach, on June 24, 2021. CHANDAN KHANNA / AFP
Highlights
Building collapsed after 1 a.m. near Miami Beach.

At least one person was killed and as many as 99 were missing Thursday after about half of the units in a high-rise oceanfront condominium building near Miami Beach collapsed overnight. 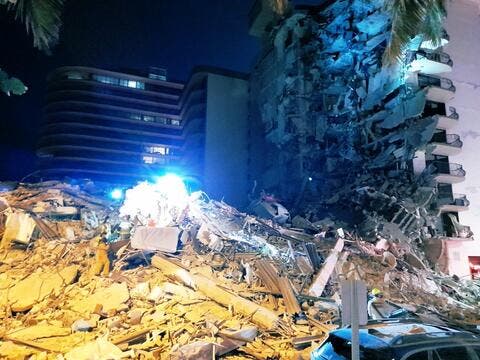 "This is a tragedy without precedent in the United States of America," Rep. Debbie Wasserman Schultz, D-Fla., said during an evening press conference from the scene. "The devastation that I witnessed today is the likes I've never seen."

Officials said a portion of the Champlain Towers building in Surfside, Fla., collapsed after 1 a.m. On Thursday afternoon, flames and smoke broke out at the site, WPTV-TV reported.

According to authorities, a woman was killed and at least 10 others were hurt. Officials said two people, including a young boy, were pulled from the debris and hospitalized. Thirty-five people were evacuated from the building, they added.

Miami-Dade County Mayor Danielle Levine Cava told reporters in the evening press conference that 99 people were still missing, some of whom may not have been in the building, while authorities have been able to confirm as safe 102 people.

"The rest of the search and rescue efforts has been done by manpower on the outside, search on the barrier quarters, also with drones and with dogs," Miami-Dade Commissioner Sally Heyman told CNN. "It has shifted now or started to shift to recovery."

A family unification center was set up and more than 80 technical and rescue teams were at the scene.

The government of Paraguay said members of first lady Silvana Lopez Moreira's family lived on the 10th floor of the building. Officials said they haven't been in contact with her sister -- who lives there with her husband and three children -- and consider them to be missing.

Florida Gov. Ron DeSantis declared a state of emergency Thursday evening at the urging of Cava, who wrote on Twitter that she had done so at a local level, and President Joe Biden, who said doing so would make available assistance to Federal Emergency Management Agency officials assessing the situation.

"I say to the people of Florida, whatever help you want that the federal government can provide, we are waiting, just ask us, we'll be there," said Biden.

Schultz said there will now be "unprecedented resources" made available to the affected families, the city and local government, among other resources to cover housing and funeral costs.

"It's a dark and tragic day," Sen. Marco Rubio, R-Fla., said. "But from it we continue to pray for some miracles and we're inspired by the men and women, the heroes, who are out there right now risking their lives, really, to rescue, hopefully rescue

The 12-story building was built in 1981 and has more than 130 condo units. Cava told reporters at a news conference that about half of the condo units collapsed.

Security camera footage from nearby building captured the moment part of the building fell.

Surfside is located about about 3 miles north of Miami Beach and 10 miles northeast of downtown Miami.

The Miami Beach Police Department confirmed earlier that it was assisting in the rescue operation.

The cause of the partial collapse wasn't immediately known. Resident Victor Cohen, who lives near the complex, told WPLG-TV the building had been undergoing a major renovation.

Surfside Mayor Charles W. Burkett said roof work was being done on the building, but he couldn't imagine that causing the collapse. He suggested a sinkhole could be to blame, but engineers were working to inspect the building and determine the cause.

The building was early in its 40-year recertification process, which includes inspection to determine its general structural condition, and the general condition of its electrical systems.

"There was work on the building being done to meet the 40-year standard," Miami-Dade County Commission member Salley Heyman said. "That is something that has been put in place not just for the county, but for all municipalities, and we have a strict building code since Hurricane Andrew for updates and improvements."

More rescue dogs have been brought out to the Surfside collapsed building. It's going to be a sad few days in Miami, folks. Photo: Miami Herald. pic.twitter.com/HipealvQ58

Shimon Wdowinski, a professor at Florida International University's institute of environment, said a 2020 study found land in the area had shown signs of sinking from 1993 to 1999.

He added, however, that such sinking alone would not likely cause a building to collapse.

"When we measure subsidence or when we see movement of the buildings, it's worth checking why it happens," said Wdowinski. "We cannot say what is the reason for that from the satellite images but we can say there was movement here."

DeSantis urged people to call 305-614-1819 if family members were unaccounted for or were found to be safe.

"Thank you to those who have responded to the tragic building collapse in Surfside. These first responders saved lives. The state has emergency response personnel on site and will assist in any way it can," he tweeted.