Since the February 1, 2021 coup, Myanmar’s junta has arrested 98 journalists, 46 of whom are currently in detention, according to the Assistance Association for Political Prisoners (AAPP). Six journalists have been convicted, including five for violating section 505A of the penal code, a new provision that makes it a crime to publish or circulate comments that “cause fear” or spread “false news.” “Fake news” appears to be any news that the authorities do not want to reach the public. 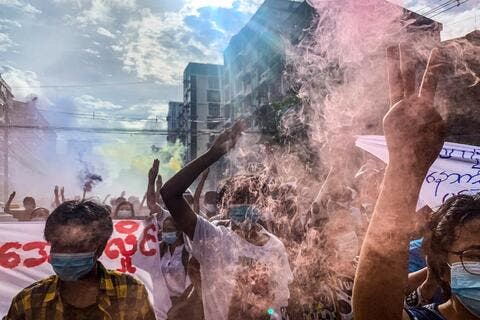 “Myanmar’s junta has made the mass arrest of journalists and control over the media a key component of its seizure of power from a democratically elected government,” said Phil Robertson, deputy Asia director at Human Rights Watch. “The junta’s intensifying surveillance, harassment and detention of journalists is rapidly turning Myanmar into one of the region’s most dangerous places to be a journalist.”

On June 30 the Ministry of Information issued a warning to journalists to stop describing the military-appointed State Administration Council as a “junta” or face prosecution. It also warned foreign news agencies to cease using the terms “military council” or “military junta,” and to stop “disseminating false news to global people.” The order threatened that “action will be taken against them under the existing laws if they apply wrong usages, quote and exaggerate fake news, and disseminate false information.”

Those sentenced under section 505A are: 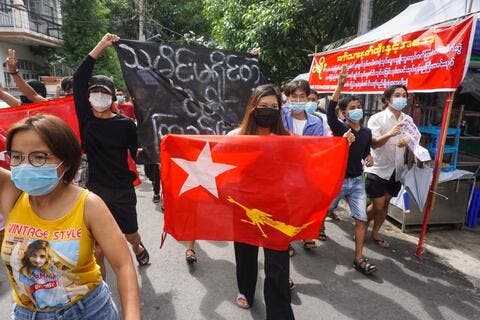 Another DVB reporter, May Thwe Aung, was sentenced to one month in prison under penal code section 188 for disobeying a public servant. She had learned on March 16 that the authorities had arrested her husband, Min Min Aung, who is a reporter for The Voice Daily. When she arrived at the police station in Oakkan township in Yangon region to try to find him, the police detained her, ultimately leading to her being charged and prosecuted.

The crackdown on journalists is part of the junta’s larger effort to suppress independent media coverage of the situation in Myanmar, and to deny the serious rights violations the military is committing across the country, Human Rights Watch said. “If the situation becomes worse, then it becomes not a safe place for us and the only choice would be to leave the country,” one local reporter told Human Rights Watch.

On May 4 the authorities arrested the US journalist Danny Fenster, the managing editor of Frontier Myanmar, at the Yangon International Airport as he prepared to leave the country. On June 18 the authorities charged Fenster under penal code section 505A in a closed hearing inside Insein prison. The basis for the charge against him is not clear.

On March 9 the police arrested the Kamayut Media founders Nathan Maung and Han Thar Nyein at their office in Kamayut township in Yangon. Nathan Maung, who has since been released and left the country, said both endured days of torture including routine beatings and sleep deprivation. Han Thar Nyein remains in detention. “Although I am free, my aim now is to make sure Han Thar and the others are also released,” he said. “They are journalists, not criminals.”

The many arrests and prosecutions of journalists have had a severe chilling effect on independent journalism in Myanmar. On March 8 the junta stripped media licenses of five local outlets: DVB, Khit Thit Media, Mizzima, Myanmar Now, and 7Day. On May 4, the authorities banned 2 other outlets, the Kachin-based 74 Media and the Shan-based Tachilek News Agency. They also banned satellite television on May 4, extending strict censorship restrictions. Mobile internet restrictions imposed on March 15 remain in place.

International human rights law prohibits arbitrary restrictions on the rights to freedom of speech and expression, including by detaining journalists and banning media outlets.

“The military’s sustained crackdown on independent media and the arrests of journalists, combined with tightening censorship, threatens to isolate Myanmar’s people with only junta propaganda,” Robertson said. “The junta should immediately and unconditionally drop all politically motivated charges against journalists, reinstate the licenses of banned media outlets, and revoke abusive laws used against members of the media.”