Is Israel Trying to Take Over More than Just the Golan Heights in Syria?

A new report released by The Intercept detail Israel’s plans to vastly expand its presence in Syria, moving far beyond the Golan Heights and into the Quneitra and Daraa provinces.

According to the report, plans are currently being laid out to push 40 kilometers into Syria. In other words, Israel is working to cement de facto control over large swathes of southern Syria, a move that Israel has a history of deploying to gain a foothold in territories and other countries in the name of national security.

From the Golan Heights, to southern Lebanon and the West Bank, Israel has consistently pushed its forces into areas to create so-called ‘buffer zones’ between itself and its adversaries.

Controlling the Fate of Southern Syria 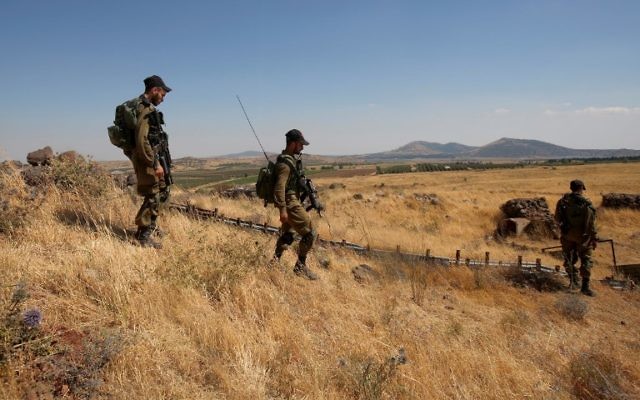 What makes its recent push into southern Syria notable is how far and extensive the buffer zone will be. In addition to arming regime opposition troops, Israel seeks to build partnerships “with Syrian opposition leaders, civil society leaders, NGOs, and health officials on the ground to work on joint educational, health, and agricultural projects.”

The Golan Heights is a mountainous region in between Israel, Syria and Lebanon, and much of it has been occupied by Israel since the 1967 war. In occupying the land, Israel claimed that it was creating a buffer between it and its enemies--specifically Syria and Lebanon. But as Iran, an avowed enemy of Israel, has become more involved in the Syrian Civil War, moves are being made to counter Iran’s burgeoning power in Syria.

The report shows that now Israel wants a total takeover of the Golan Heights, and also seeks to move beyond the region into southern Syria itself. Its first phase “enabled the Israeli army, through humanitarian organizations and military personnel, to gain access to opposition-held areas in return for supplying aid, medical treatment inside Israel, and basic goods.”

Now that the first phase has been completed, it is looking to move onto phase two. The second phase involves the “establishment of a 40-kilometer, Israeli-monitored buffer beyond the Golan Heights, a Syrian border police force armed and trained by Israel, and greater involvement in civil administration in opposition-controlled areas in two southern provinces.”

The Israeli army’s chief of staff spoke in defense of the initiative: “We’re pursuing several different avenues to prevent Iranian entrenchment within 30-40 km of the border…  We want to get to a point where there is no Iranian influence in Syria, and this is being done in a combined military and diplomatic effort.”

Despite the historical animosity between Syrians and the Israeli government, many groups are willing to accept Israeli aid and weapons. It is becoming harder for opposition groups  to secure a major international backer to supply them thanks to Assad’s gaining potentially unstoppable momentum and the muddy links between some rebel groups and extremist organizations operating in Syria. Often times, they are one in the same group.

As an anonymous, opposition commander tells The Intercept, Israeli aid is already starting to reach Daraa, a city in Syria approximately 40 kilometers from the Golan Heights. The commander told The Intercept that there are groups operating “who are now completely in Israel’s pocket.”

A buffer zone that large and extensively controlled by Israel promises to keep a frontline open between opposition forces and Syrian and Iranian troops in addition to Iranian-backed proxy groups like Hezbollah. That frontline would then likely remain far away from Israel’s borders.

An airstrike hits Daraa in 2017(AFP/FILE)

Israel’s ‘security first’ approach to occupying or controlling land has been a hallmark of its strategy of self-preservation.

Dr. Aida Essaid, author of “Zionism and Land Tenure in Mandate Palestine,” explains the use of Israel’s tactic of occupation:

“It’s expanding its borders...maximizing its borders, the way it does with Jerusalem, the West Bank, the Golan Heights, the way it has trapped everyone in the Gaza Strip. If you look at what the Gaza Strip was decades ago, it’s not the same strip as it is now, it was a much larger area of land. But Israel condensed the population into a smaller part of the land. Again it’s about maximizing land for the state of Israel.”

During the 1967 war, Israel seized Gaza, East Jerusalem, the West Bank and much of the Golan Heights—all territory that it continues to occupy in the name of securing its people against threats.

These ‘buffers’ often involve crossing state lines with a military force before building a cordon around the area it seeks to control. The West Bank is surrounded by a tall, grey wall called the separation barrier, which Dr. Essaid describes as an “apartheid wall.”

Israel escalating its control of southwestern Syria broadly follows this pattern, except now it is wandering far from its own state lines.

The last Israeli occupation and sponsor of local armed militias happened in Lebanon, where Israel Defense Forces (IDF) partnered with a Lebanese militia, the South Lebanon Army, to secure the occupation of southern Lebanon. That occupation lasted for approximately 15 years, from 1985 to 2000.

Intensified Israeli intervention in Syria could bring more emergency aid and relief to a region trapped by war. At the same time however, it also promises to continue fueling a conflict between Israeli-backed opposition fighters and allies of the Assad regime that will endanger the lives of thousands.