Strutting off his plane and onto the tarmac of the Hmeimim Air Base in Syria, Vladimir Putin carried himself as a heroic savior descending to survey the lands he’s saved.

In a surprise visit to Syria in December, Putin announced that Russia’s military mission in Syria is finished and that his soldiers would be going home.

“Homeland awaits you, my friends,” Putin told his military personnel, who have been in Syria since 2015 and helped turned the tide of the Syrian Civil War in the regime’s favor when it was once a protracted stalemate.

Unbeknownst to many, however, was that Putin was drawing up plans to make permanent Russia’s military presence in Syria.

In fact, the very same base where he announced his withdrawal plan is now being transformed into a permanent Russian fixture in the war-torn landscape of northwestern Syria.

It is now becoming clear that Russian President Vladimir Putin is quietly working to cement Russian influence in the Middle East via Syria, empower regional allies in the fight against U.S. power and expand Russia’s global weapons trade.

The 'Withdraw' That Never Will Be 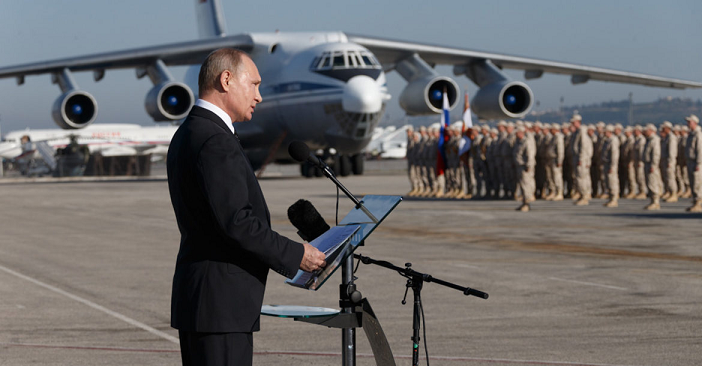 The Hmeimim Air Base and Tartus Naval Base in western Syria have been crucial landmarks of Russia’s military intervention in Syria. Behind the veil of fighting ISIS’ rise, Putin has been laying the foundation for Russia to become an indefinite fixture in the Middle East, according to Anna Borshchevskaya, the Ira Weiner Fellow at the Washington Institute for Near East Policy and a Fellow at the European Foundation for Democracy.

“If you look at the military equipment Putin brought into Syria, including into Tartus, it was to project Russia’s power and reduce Western ability to operate militarily. This, not fighting ISIS, was Putin play and still is.”

According to Borshchevskaya, Putin has had his eyes on the Middle East for over almost twenty years, and the crisis in Syria is precisely the opportunity he has been waiting for. Formally ‘withdrawing’ from the country was just Putin’s way of allowing that to happen unabated.

“Putin wanted to return to the Middle East from the very beginning since coming to power in 2000, and he took steps from the beginning towards this goal.”

One of the biggest steps is the recent agreement for Russia to use and control the Tartus naval facility for a minimum of 49 years with the possibility to automatically extend that time for another 25 years.

In other words, Russia has signed an agreement to stay in Syria for the rest of the century.

This is happening at a time of decreased military and diplomatic participation from the U.S., which is helping Russia become the go-to global power operating in the country.

The military intervention in Syria has always been unpopular with the Russian people, who see it as a needless expenditure in an already stressed economic environment. Because of this, Putin has been forced to delicately balance domestic pressures and expansionist ambitions.

In attempting to stimulate Russia’s stalling economy while projecting power abroad, the Tartus Naval Base has both a military and market function: “Ports are very important for Russia historically, especially warm water ports because Russia is a traditional land power,” Borshchevskaya claims. Tartus sits right on the Mediterranean.

On top of that, Putin has used Syria as a “testing ground” for an expanded weapons trade in Borshchevskaya’s words. It seems to be working.

Russian arms manufacturers are raking in billions from deals to supply Assad’s side in the war, so much so that Al Jazeera calls Syria “Russia’s showroom,” for its weapons.

Russia Today, a state-owned media outlet, reports that arms sales to the Middle East is soaring, in line with Putin’s promise to expand Russia’s role in the global arms trade. Deals to clients in the Middle East account for about a fifth of Russia’s state arms company, Rosoboronexport.

Though the Syrian Civil War has killed hundreds of thousands, displaced countless millions, and created one of the largest humanitarian crises in history, some Russians have profited off its misery greatly.

The decision to discreetly solidify a Russian military presence also has much to do with Putin’s ambition to project Russian power globally, not just in Eastern Europe where a shadow of the Soviet Union still lies.

While U.S. President Donald Trump peddled an 'America First' foreign policy of retrenchment from the Middle East, Putin has been working to become the main global player in the region.

Apart from establishing military bases in Syria, Putin also helped to craft and enforce the first attempt at international mediation of the Syrian conflict with the creation of supposed ‘de-escalation zones,’ which in reality has been a diplomatic way to empower Russia and the Syrian regime to recapture what’s left of Syria’s opposition-held territory.

The U.S. had little role in those negotiations and has been sitting quietly by the wayside as Putin siphons off U.S. influence.

Here, Borshchevskaya is unequivocal: “Putin seeks to create the perception of Russia as a great power and reduce Western influence in the region; Tartus is part of this calculus.”

So far, Putin seems to be on top, ably balancing Russian pressure to end a war while projecting influence in the region.

When Putin told his soldiers, “Homeland awaits you, my friends,” it was assumed he was referring to Russia. But more and more, it seems clear that his soldiers may have a new homeland: Syria.