Published January 25th, 2022 - 09:48 GMT
Palestinian youths hide behind a makeshift shield during confrontations with Israeli security forces, following a demonstration against the expropriation of land by Israel in the village of Kfar Qaddum near the Jewish settlement of Kedumim in the occupied West Bank, on January 21, 2022. (Photo by JAAFAR ASHTIYEH / AFP)
Highlights
More than 600,000 Israelis live in over 230 settlements built since the 1967 occupation of the West Bank.

Palestinian Prime Minister Mohammad Shtayyeh has warned of escalating violence by extremist Israeli settlers against Palestinians and their properties across the occupied West Bank, condemning their attacks against local communities in the occupied territories. 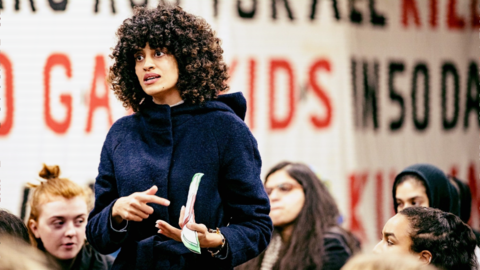 Speaking at a weekly cabinet session in the northeastern West Bank city of Tubas, Shtayyeh stated that the Palestinian Authority condemns the seizure of Palestinian farms by hundreds of Israeli settlers in northern West Bank as well as their putting of signs on the roads prohibiting farmers from reaching their lands.

“Tubas and the Jordan Valley areas witness gradual annihilation of the West Bank. Israel continues to destroy the Palestinian lands, plows them with tanks and heavy military vehicles, and destroys all elements of Palestinian steadfastness,” he said.

Shtayyeh added that Israeli authorities “are expelling the Palestinians from their living places under the pretext of military training and prevent them from returning to their homes.”

The Palestinian prime minister’s remarks came on the same day that Israeli settlers stormed the West Bank Palestinian town of Huwara, and vandalized stores, homes, and vehicles in a violent attack that left three Palestinians injured.

The Israeli army said in a statement that “there was an altercation between settlers and Palestinians, in which several Palestinian vehicles and businesses in Huwara were damaged.”

“The altercation began when a number of vehicles traveling in a convoy on Route 60 through the Huwara threw stones” causing extensive damage, the statement added.

According to Israeli human rights organization Yesh Din, the attack occurred in full view of Israeli military forces, who often heavily patrol that section of the road.

Yesh Din said that a group of extremist Israeli settlers arrived in a convoy of cars accompanied by Israeli troops, from the direction of the Tapuah junction, and that the convoy played loud music.

The convoy stopped in Huwara, which lies south of Nablus. Those in the vehicles threw stones at Palestinian cars, stores, and homes, shattering windows and injuring three Palestinians, the rights group noted.

“In broad daylight, under the guise of protection from the soldiers, a convoy of settlers is conducting a pogrom against the Palestinians,” Amihai stated.

Last month, the Palestinian Ministry of Foreign Affairs and Expatriates called upon the international community to intervene immediately and to pressure the occupying Israeli regime into stopping “acts of terrorism” committed by extremist settlers against Palestinians and their communities.

The ministry, in a statement, urged UN Secretary General António Guterres to promptly activate the international protection system for Palestinian civilians under the Israeli occupation. 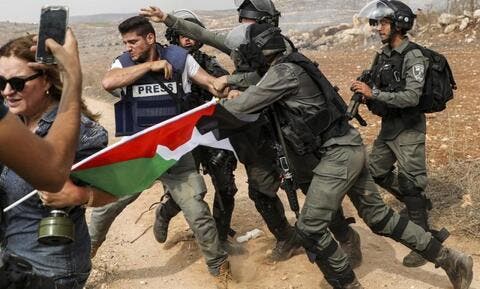 Israel occupied the West Bank and the Gaza Strip — territories the Palestinians want for a future state — during the six-day Arab-Israeli war in 1967. It later had to withdraw from Gaza.

More than 600,000 Israelis live in over 230 settlements built since the 1967 occupation of the West Bank. All of the settlements are illegal under international law. The United Nations Security Council has condemned the settlement activities in several resolutions.