Published September 2nd, 2021 - 11:10 GMT
Demonstrators lift placards calling for the release of Anhar al-Deek, a nine-month pregnant Palestinian woman incarcerated in an Israeli prison, during a protest in front of the Red Cross offices in the city of Ramallah in the occupied West Bank, on August 31, 2021.(Photo by ABBAS MOMANI / AFP)
Highlights
Anhar al-Deek will be delivering her child in Israeli jail

Citing health grounds, activists and human rights defenders are calling for the release of jailedAnhar al-Deek in Israeli jail while awaiting trial. 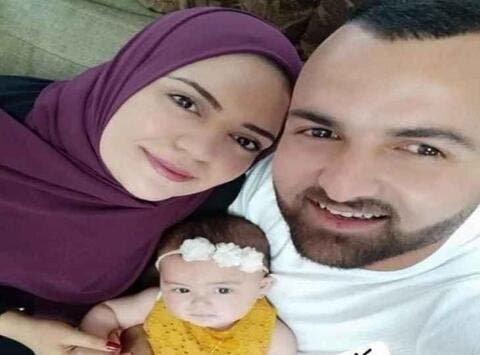 A 26-year-old pregnant woman, Anhar al-Deek, may give birth in an Israeli prison while awaiting trial. It will be the first such incident since 2008 amid an outcry by activists and human rights defenders.

Deek was four months pregnant when she was arrested at the illegal Israeli farming outpost of Sdeh Ephraim on March 8 for allegedly attempting to attack Jewish settlers.

Now with her due date getting close, Deek continues to be held at the Damon prison near Haifa. Her medical condition demands her to give birth by a surgical Cesarean section at a hospital. A military court is set to decide whether to release her on the grounds of health or keep her in prison. Her trial, which was recently postponed, is set to be held on Sunday, Addameer Prisoner Support and Human Rights Association told TRT World.

Palestinian and Israeli demonstrators gathered in Gaza, Haifa, and West Bank protested against her detention. Al Deek’s family, including her 20-month-old daughter Julia and her husband Thaer, were among the protesters. The Arabic hashtag translating as “Save Anhar al-Deek” trended on Twitter multiple times.

The mission of the State of Palestine to the United Nations in Geneva has sent an urgent appeal to request the international community to take action to release Al-Deek, according to the Wafa news agency.

In a letter sent out of the prison, Al Deek appealed to the international community to intervene and make her release possible so that she could give birth in the hospital.

"What shall I do if I give birth while I’m away from you (her family)?” al-Deek wrote. “I am handcuffed and you know how a cesarean operation [is difficult] outside the prison. How will I go through this experience while I’m in prison and alone?" she said.

Al Deek reportedly said that under the garb of coronavirus, the Israeli prison authorities will keep her in solitary confinement after delivering a baby.

A security official familiar with regulations told Times of Israel that Al Deek would be taken to an Israeli hospital while under guard. Dispelling the rumours, the official said she wouldn’t be chained to her hospital bed but the guards would stay at the front door of her recovery ward.

Sahar Francis, director of Addameer, on the other hand, described harrowing experiences of at least four Palestinian women who gave birth under the watch of Israeli authorities.

“Our experience in [dealing with] previous cases is why we say there is abuse and neglect,” Francis said, adding that it’s likely that Al Deek would be treated in the same manner.

Francis said prison conditions are unsafe for a pregnant woman as she’s not offered any essential treatment an expecting woman close to her delivery date should receive.

According to Israeli prison system regulations, female prisoners are allowed to keep their babies with them until the age of two. If she's not released before her delivery, Al Deek may also keep her baby with her for two years. She plans to name him Ala.

“Evaluation for the international standards on the level of the protection and the minimum standards should be offered for prisoners in general, according to the Geneva Convention,” Francis said. “And in the case of Anhar, she should be released on condition to continue her trial outside the prison.”

Palestinian political prisoner Anhar Al-Deek, on her ninth month of pregnancy, is very close to giving birth inside Israeli detention. Let's advocate for her freedom.#SaveAnhar#FreeAnhar pic.twitter.com/PCBlSKeuJD

Built at the top of Mount Carmel in Haifa during the British mandate, the Damon prison is known for being outdated and lacking basic services such as electricity. There is currently no infant residing in the maximum security complex.

Fatma al Ziq from Gaza was arrested in May 2007 when she was two months pregnant. She was the last Palestinian woman to give birth in an Israeli jail. Al Deek may follow her fate if she delivers her child in prison.