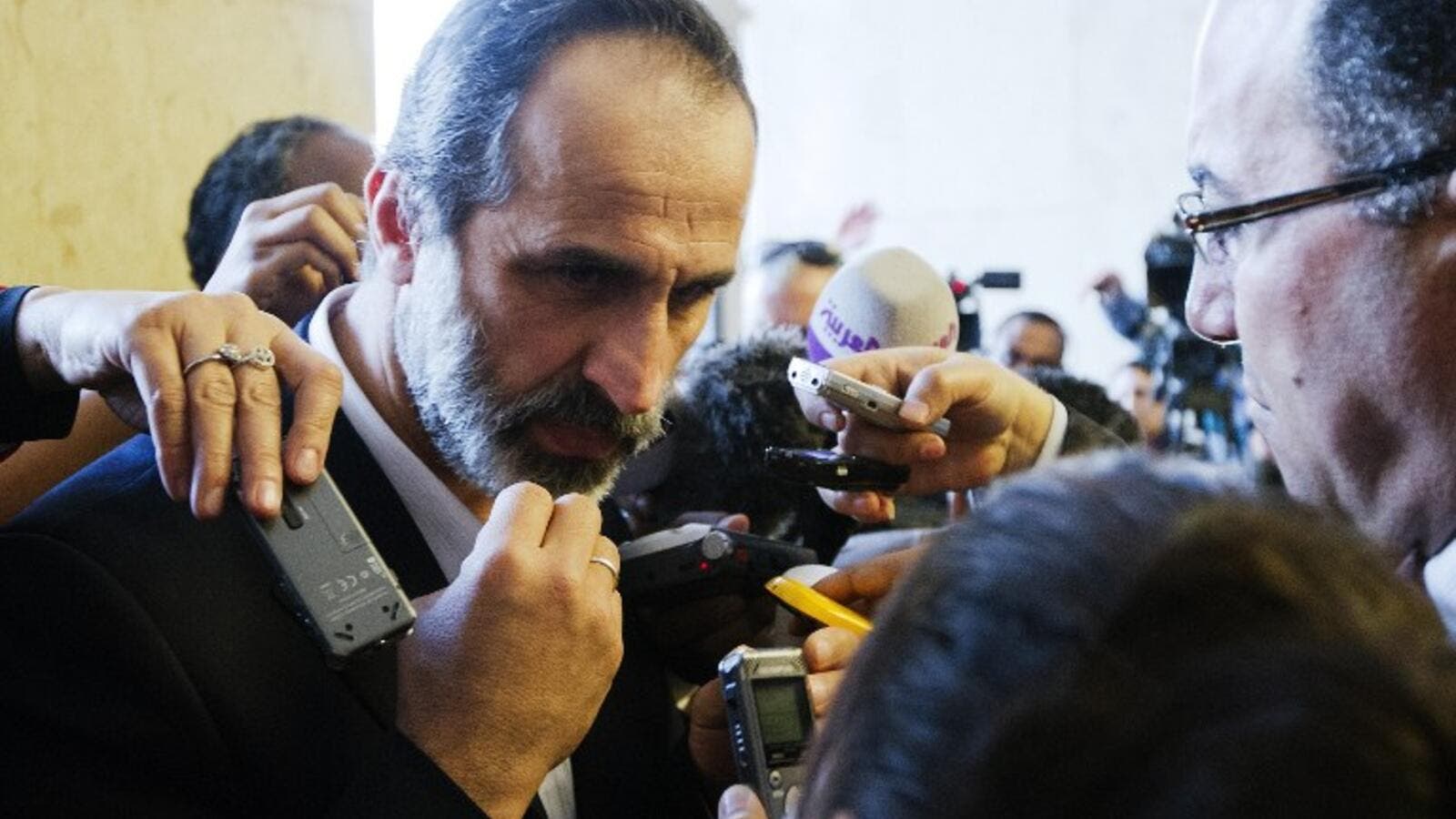 The Syrian opposition's National Coalition chief Ahmed Moaz al-Khatib speaks to the press after a meeting at the Egyptian foreign ministry in Cairo.

The commander of the Free Syrian Army, encouraged by recent successes on the battlefield, says he is ready to meet with military officers from the regime of President Bashar Assad to “discuss how to keep order in the country” should Assad give up power. Brig. Gen. Salim Idriss, who became commander in chief of the rebel forces three months ago, made the surprising offer of talks in a telephone interview Friday from Turkey. His comments follow a similar proposal last month by Sheikh Ahmad Moaz al-Khatib, the head of the coalition of political opposition groups, to meet with officials of the regime to discuss a political transition.

Idriss’ comments were the first clear sign that the Free Syrian Army command is making serious plans for how to stabilize the country if Assad falls. His statements are likely to reassure top U.S. officials, who have been debating in recent days whether to support Idriss’ private request for training and weapons.

“We can say in the Free Syrian Army that we are ready to meet any parties in the [Syrian] army who didn’t have any role in making decisions to kill Syrians,” Idriss said. He specified two conditions for talks: Assad must state publicly that he is stepping down, and there must be trials of security-force commanders who killed unarmed Syrian protesters.

By specifying that he was excluding only top decision-makers, Idriss seemed to be opening the way for talks with other senior Syrian officers who may have sided with the regime but have not been part of Assad’s inner circle.

Idriss also requested, for the first time publicly, that the U.S. train Free Syrian Army special operations forces that could secure chemical or biological weapons and implement international humanitarian law in dealing with Assad’s forces. He had made this request privately to Washington in a Feb. 4 letter.

The Syrian rebel commander said the U.S. should “train the trainers,” by providing quick help to Free Syrian Army officers who could then spread the techniques among a wider network. He proposed that this training be done inside Syria, in areas that the rebel forces have liberated.

Idriss said he hadn’t yet received a formal answer from Washington, but that he was “sure” the training would be offered.

Asked about the Free Syrian Army’s dealings with the extremist Nusra Front, which has provided some of the most effective fighters on the rebel side, Idriss said this was “a very difficult question.” He said the Free Syrian Army command structure, which he leads, doesn’t share information or ammunition with the Nusra jihadists. “They are working alone,” he said. However, he said he had no evidence that the group, which is an offshoot of Al-Qaeda in Iraq, had been involved in terrorist operations in Syria or outside the country.

Idriss said that the rebels were preparing for a final battle to take Damascus, but that “it won’t be in a short time.” Instead, he said, the rebels wanted to prepare well for a decisive campaign to seize the capital.

The rebel general said he wasn’t prepared to talk with Russian officials. “Russia is a party to the fight. They are supporting the murderer,” he argued, using the term he said the rebels apply to Assad. To join a transition process, he contended, the Russians “have to be neutral.”

A German-trained electronics engineer, Idriss is the most articulate of the many Free Syrian Army officers I’ve talked with over the past six months. Until he defected from Assad’s army in July 2012, he was a professor at the Military Academy of Engineering in Aleppo. He speaks fluent English and gives a coherent voice to what has often been a disorganized rebel military.

But despite Idriss’ talk of a clearer command-and-control structure, Syrian sources say the situation often remains chaotic on the ground, with independently financed battalions operating on their own, warlords controlling some liberated areas, and extremist fighters gaining growing power.

But if Idriss can follow through on the plans he outlined in the interview, it would make the possibility of a stable transition of power in Syria at least conceivable.