Published May 23rd, 2021 - 07:22 GMT
Pro-Palestine demonstrators hold placards as they gather to march in central London on May 22, 2021. JUSTIN TALLIS / AFP
Highlights
Pro-Palestine protesters burn Israeli flag outside of the country's London embassy in South Kensington

Pro-Palestine activists have burned Israeli flags outside the nation's embassy in the capital, as London faces consecutive weekends of anti-Israel protests. 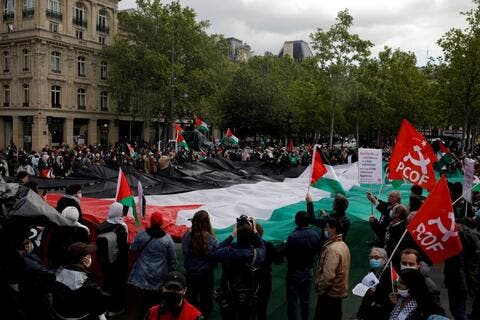 Tens of thousands of demonstrators gathered in central London for a second weekend in a row as they called for an 'urgent' resolution to the Israeli-Palestine conflict.

Cars were smashed up by protesters, with pictures showing a traffic cone shoved through the rear window of one parked vehicle surrounded by activists waving Palestinian flags.

Pro-Palestine protesters in London wave hate-filled signs calling Israel 'the new Nazi state', claiming 'Netanyahu surpasses Hitler in barbarism' and saying 'stop doing what Hitler did to you' https://t.co/VdoQMo2HOa <This is truly abhorrent

Loud chants of 'Israel is a terrorist state' could be heard as the activists weaved their way through the capital, setting off flares and blocking traffic in the process.

The large group, situated close to Victoria Embankment, stretched across the surrounding roads as dozens of police officers watched on.

Demonstrators could be seen wearing costumes, masks and face paint, while others were draped in the Palestinian flag.

Some protesters used nearby Whitehall Gardens as an area to pray, as the crowd continued to chant and let off green flares.

It comes as Egyptian mediators held talks to firm up the Israel-Hamas ceasefire as Palestinians in Gaza Strip began to assess the damage from 11 days of intense Israeli bombardment.

The talks after a 130-truck convoy carrying urgently needed aid headed to Gaza. Saturday marked the first full day of a truce that ended the fourth Israel-Hamas war in just over a decade.

They could be heard loudly chanting 'Free free Palestine' and 'Israel is a terrorist state'. The National Education Union, the Palestine Solidarity Campaign and Stop The War Coalition were all present.

A small group of unmasked protestors set an Israeli flag alight at the country's embassy, while others tried smashing up cars as police officers chased them off in High Street Kensington.

Armed with flares and chanting, one man triumphantly holds the burned flag aloft as video footage of the event was shared online.

Another group of people turned to vandalising vehicles after the rear window of a car was smashed by someone throwing a traffic cone in High Street Kensington this evening.

Protester Muktha Ali, 32, from Harrow, north-west London, said: 'I'm here because this is now urgent, the Israeli occupation needs to end now, it's been long enough.'

He added: 'Mothers, fathers, brothers, sisters and children have been bombed and murdered, Palestine has to be free.'

In the Middle East fighting, Israel unleashed hundreds of air strikes against militant targets in Gaza, while Hamas and other militants fired more than 4,000 rockets towards Israel. Over 250 people have died - mostly Palestinians.

Gaza City's busiest commercial area, Omar al-Mukhtar Street, was covered in debris, smashed cars and twisted metal after a 13-floor building in its centre was flattened in an Israeli air strike.

Merchandise was covered in soot and strewn inside smashed stores and on the pavement. Municipal workers are removing broken glass and twisted metal from streets and pavements.

'We really didn't expect this amount of damage,' said Ashour Subeih, who sells baby clothes. We thought the strike was a bit further from us. But as you can see, not an area of the shop is intact.'

Having been in business for one year, Mr Subeih estimated his losses were double what he has made so far.

Both Israel and Hamas have claimed victory. There is a widespread expectation that the ceasefire will remain intact for now, but that another round of fighting at some point seems inevitable.

Underlying issues remain unresolved, including an Israeli-Egyptian border blockade, now in its 14th year, that is choking Gaza's more than two million residents and a refusal by the Islamic militant Hamas to disarm.

The fighting began May 10, when Hamas militants in Gaza fired long-range rockets toward Jerusalem.

The barrage came after days of clashes between Palestinian protesters and Israeli police at the Al-Aqsa Mosque compound.

Heavy-handed police tactics at the compound and the threatened eviction of dozens of Palestinian families by Jewish settlers had inflamed tensions.

It appears that Hamas increasingly positioned itself as a defender of Jerusalem in Palestinian public opinion.

On Friday, hours after the ceasefire took effect, thousands of Palestinians in the Al-Aqsa compound chanted against Palestinian President Mahmoud Abbas and his self-rule government.

'Dogs of the Palestinian Authority, out, out,' they shouted, and 'The people want the president to leave.' It was an unprecedented display of anger against Mr Abbas.

The conflict also brought to the surface deep frustration among Palestinians, whether in the occupied West Bank, Gaza or within Israel, over the status quo, with the Israeli-Palestinian peace process all but abandoned for years.

Despite his weakened status, Mr Abbas will be the point of contact for any renewed US diplomacy, since Israel and the west, including the United States, consider Hamas to be a terrorist organisation.

They’re bringing their wars to our streets!

Look at the fkin state of our Country.
You’d think it was the MiddleEast.https://t.co/cuyewm7jOC

US secretary of state Antony Blinken is to meet with Mr Abbas and Israeli leaders when he visits in the coming week.

Mr Abbas is expected to raise demands that any Gaza reconstruction plans go through the Palestinian Authority to avoid strengthening Hamas.

Meanwhile, two teams of Egyptian mediators are in Israel and the Palestinian territories to continue talks on firming up a ceasefire deal - and securing a long-term calm, a diplomat has revealed.

He said discussions include implementing agreed-on measures in Gaza and Jerusalem, including ways to prevent practices that led to the latest fighting.

Although he did not elaborate, the diplomat was apparently referring to violence at the Al-Aqsa Mosque and the planned eviction of Palestinian families from the Sheikh Jarrah area in east Jerusalem.

Separately, Egypt said it would send a 130-truck convoy carrying humanitarian aid and medical supplies to Gaza. The convoy is expected to enter Gaza on Saturday.

The bombardment struck a blow to the already decrepit infrastructure in the small coastal territory, home to more than two million Palestinians. It flattened high-rises and houses, tore up roads and wrecked water systems.

At least 30 health facilities were damaged, forcing a halt to coronavirus testing in the territory.

The Gaza health ministry said at least 243 Palestinians were killed, including 66 children, with 1,910 people wounded.

It does not differentiate between fighters and civilians. Twelve people were killed in Israel, all but one of them civilians, including a five-year-old boy and a 16-year-old girl. 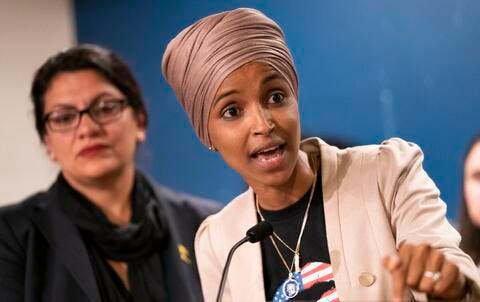 Israel has accused Hamas and the smaller militant group of Islamic Jihad of hiding the actual number of fighters killed in the war. Israeli prime minister Benjamin Netanyahu said more than 200 militants were killed, including 25 senior commanders.

Islamic Jihad gave its first account of deaths within its ranks, saying that 19 of its commanders and fighters were killed, including the head of the rocket unit in northern Gaza.