Published September 20th, 2021 - 06:47 GMT
An oil tanker carrying fuel oil from Iraq, is seen anchored near the Zahrani power plant in Zahrani near the southern Lebanese city of Sidon (Saida) on September 18, 2021. Mahmoud ZAYYAT / AFP
Highlights
Maronite patriarch calls on government to end the smuggling of Iranian fuel from Syria

Armed men opened fire at a gas station in the Bekaa valley on Sunday and threatened to kill the owner as Lebanon’s fuel crisis sustain to spiral out of control. 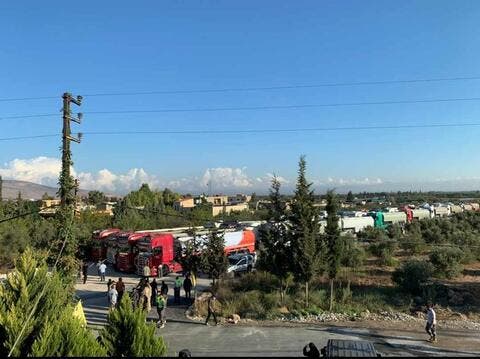 The incident in the town of Beit Chama came amid long queues at gas stations, frequent power cuts and a 20-liter canister of gasoline selling on the black market for 500,000 pounds ($327) when the official price is 180,000 pounds.

The fuel shortage has not been eased by the arrival last week of tanker trucks of diesel from Iran, smuggled across the border from Syria in a deal brokered by Hezbollah in breach of US sanctions. A third tanker is at sea on its way from Iran to the Syrian port of Baniyas.

Neither the arrival of Iraqi fuel to Electricité du Liban nor that of Iranian diesel has yielded positive results yet.

In his Sunday sermon, Maronite patriarch Bechara Boutros Al-Rahi denounced the smuggling of Iranian fuel from Syria. “The state cannot be built on practices or positions that contradict its entity and institutions,” he said.

Al-Rahi said the new government under Prime Minister Najib Mikati should “work as a united national team to stop the collapse and confront the continuous attack attempts against the state and its democratic system.”

“The state cannot be built on practices or positions that contradict its entity and institutions,” he said, adding that the recent entry of fuel tankers and the obstruction of the investigation into the Beirut Port explosion were “among such practices.”

Al-Rahi expressed the hope that the new government would “work as a united national team to stop the collapse and confront the continuous attack attempts against the state and its democratic system.”

“The Lebanese government didn’t approve this … so I don’t believe it would be subject to sanctions,” Mikati told CNN on Saturday in response to a question about Hezbollah bringing Iranian fuel into Lebanon

“I am saddened by the lack of Lebanese sovereignty," he said.

A source close to Mikati told Arab News on Sunday: “The state of Lebanon has not asked Iran for fuel. This position had been officially expressed and has not changed.”

Iranian Foreign Ministry Spokesman Saeed Khatibzadeh commented on Mikati’s statements to CNN, saying on Sunday that sending Iranian fuel to Lebanon “happened according to a standard purchase process by Lebanese merchants. If the Lebanese government also wants to buy fuel from Iran, we would be happy to oblige.”

On Monday, Mikati’s government is expected to receive parliament’s vote of confidence with approximately 100 votes out of 128. It is expected that a vote of no confidence will be limited to the MPs of the Lebanese Forces bloc and several independent MPs.

Politicians, meanwhile, were preoccupied with the repercussions of Halliburton winning a contract to explore oil and gas in the disputed maritime border area between Lebanon and Israel.

Hezbollah is forcing Lebanon into a marriage with Iran and simultaneously funding its own budget from the proceeds of the dowry. #Lebanon
Will Iranian fuel solve fuel crisis in Lebanon? https://t.co/pPRNnoh12g via @AlMonitor

Parliament Speaker Nabih Berri called on the Ministry of Foreign Affairs to “take urgent and immediate action before the Security Council and the international community to verify the possibility of a new Israeli attack on Lebanese sovereignty and rights because any exploration contract with Halliburton or other companies in the disputed area undermines the framework agreement sponsored by the US and the UN.” 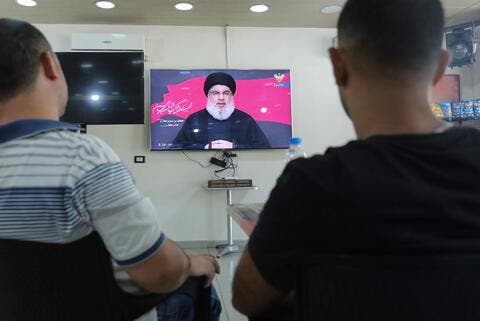 This area was based on a map sent in 2011 to the UN, but Lebanon later considered this map to be based on wrong estimates, so it demanded an additional area of 1,430 square km, including parts of the Karish gas field, in which a Greek company works for Israel.

The current Lebanese proposal is known as Line 29, and Israel has accused Lebanon of obstructing negotiations by expanding the disputed area.