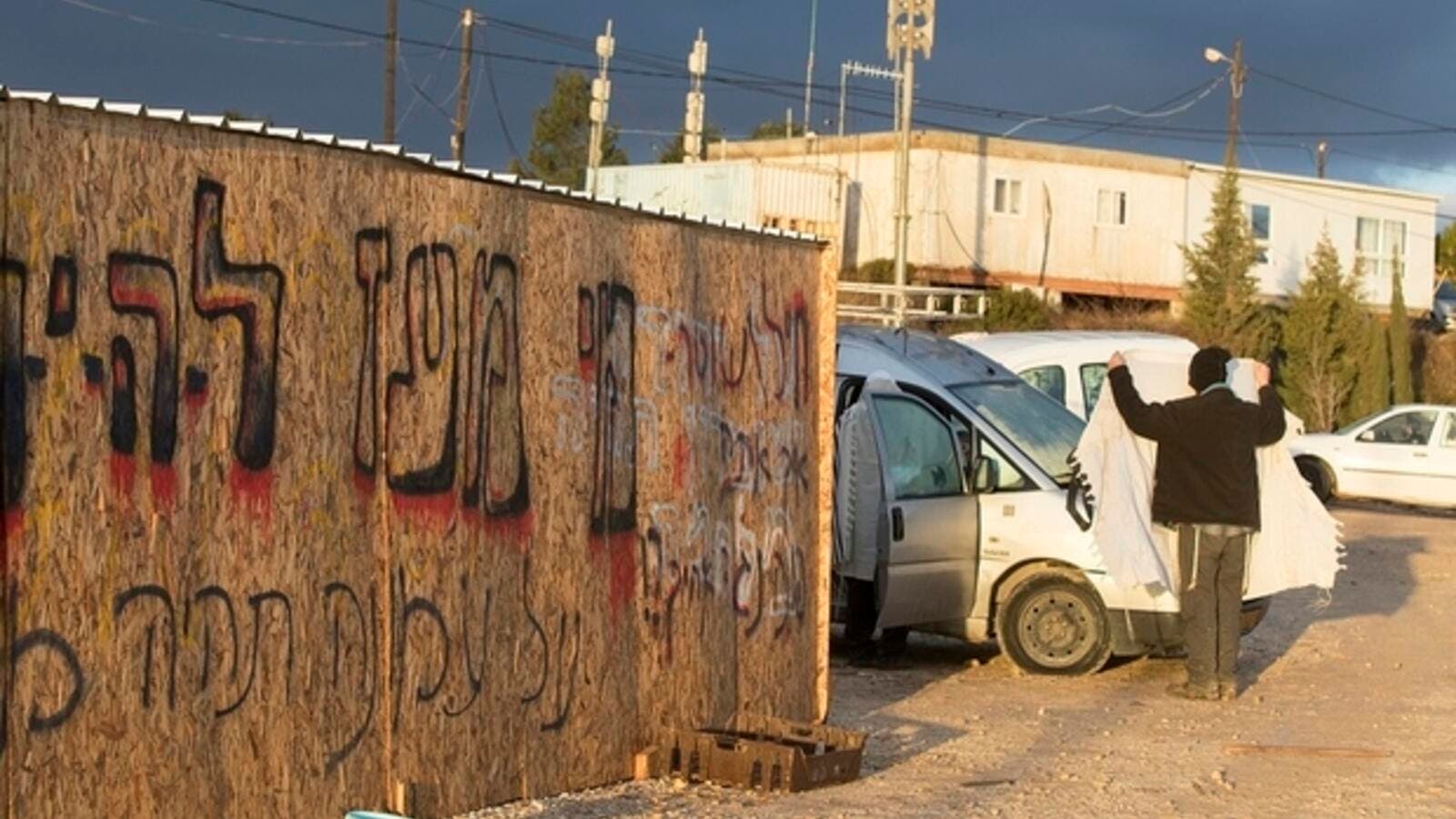 12 houses had been evacuated from Amona after families had agreed to leave. (AFP/File)

Clashes erupted between Israeli settlers and Israeli forces at the illegal Amona outpost in the central occupied West Bank district of Ramallah, as Israeli police morning began evacuating the settlement's residents on Wednesday morning in line with an order from the Israeli Supreme Court.

Israeli police spokeswoman Luba al-Samri said in a statement at 2:45 p.m. that Israeli police had detained several "suspects" and taken them for interrogation following "rioters attacking and throwing bottles and irritating materials" at Israeli police.
At 4:40 p.m. Israeli police spokesman Micky Rosenfeld reported that 16 police officers were injured lightly by stones and "liquids," and that seven people had been arrested for "disturbances," while 200 people were "removed from the area."
Rosenfeld added that 12 houses had been evacuated after families had agreed to leave.
Al-Samri said in statement around 2:00 p.m. that Israeli police officers deployed in Amona were "continuing their work to prevent any riots of settlers taking advantage of the situation and help the evacuation of settlers' families who are leaving the outpost willingly."
She added that necessary procedures would be conducted if any riots were to be occur, noting that an Israeli policeman was assaulted around noon and other policemen suffered from eye irritation "after rioters threw materials causing irritation at Israeli police."
Haaretz reported around 11 a.m. that hundreds of Israeli youth stormed into the area to protest the evacuation, throwing stones at Israeli police forces as the authorities made a push forward into the outpost.
Al-Samri said in a statement around 11:30 a.m. that Israeli police forces had been deployed at the illegal outpost since early Wednesday morning “in preparation for the direct evacuation.”
According to al-Samri, the police had communicated with resident settlers and their leadership “in order to push efforts of voluntary evacuation in accordance with what they had pledged in front of the Supreme Court of Justice.”
The Amona outpost -- which, like other settlement outposts, are illegal both under international and Israeli law -- was slated for demolition following a 2008 Israeli Supreme Court decision, after eight Palestinians from neighboring villages successfully petitioned to remove the outpost on grounds that the construction was carried out on privately owned Palestinian land.
After years of appeals from right-wing Israeli government officials, and attempts by Amona settlers to prove they had legally purchased the land, an Israeli police investigation in May 2014 found the entirety of the outpost to have been built on private Palestinian lands, and that the documents used by Amona residents to try claim their "purchases" were in fact forged.
In December 2014, the Israeli Supreme Court ordered again that the outpost be demolished by December 2016.
The Israeli Supreme Court ruled in December that Amona be evacuated by Feb. 8 and that the settlers be relocated to a new settlement adjacent to the existing Ofra settlement near Ramallah. These plans however, have also been contested, as the planned new settlement housing units would also be located on the private property of several Palestinian landowners in nearby villages.
The Israeli army on Tuesday ordered the evacuation of the Amona settlers within 48 hours, saying that the army would bar entry to Amona and not allow anyone to stay on the premises 48 hours after midnight on Monday.
The order required that the settlers remove their property from the illegal outpost by midnight Wednesday, and gave them the chance to petition the army within 48 hours.
Later Tuesday afternoon, the Knesset’s Law Committee and Foreign Affairs and Defense Committee approved by a slim vote -- with seven in favor and six against -- the "Legalization bill," which would retroactively legalize dozens of Israeli outposts, excluding Amona, built on private Palestinian land, and confiscate thousands of dunams of Palestinian land.
Both opponents and supporters of the bill have said the legislation would pave the way to annexing the majority of the West Bank.
According to Haaretz, Israel’s Education Minister Naftali Bennett, the chairman of the ultra right-wing Jewish Home party, spoke at the Knesset on Wednesday amidst the ongoing Amona evacuation, promising that the "painful loss" of Amona would be followed by the annexation of the entire occupied West Bank, something he has advocated before on multiple occasions.
During his speech, Bennett called the Amona settlers "heroes," and said that the "Legalization bill" would soon be passed, “putting an end to the method of legal uprooting of Israeli outposts.”
"Thanks to the campaign in Amona, thousands of families will be rescued from being evicted from their homes. I call on the pioneers of our generation, the settlers of Judea and Samaria, to lift up your heads," Bennet said, using the Israeli terminology for the occupied West Bank.
Israeli Attorney General Avichai Mandelblit has repeatedly stated that the bill contravenes both Israeli and international law and that the Israeli Supreme Court would likely strike it down, while Israeli officials have also reportedly expressed worry that the passage of the bill could land Israel in the ICC, a move that Erekat promised to pursue in his statement on Tuesday.