Published August 1st, 2021 - 10:13 GMT
This file photo taken on August 23, 2011 shows Saif al-Islam, the son of late Libyan dictator Moamer Kadhafi, gesturing as he appears in front of supporters and journalists at his father's residential complex in the Libyan capital Tripoli in the early hours. Saif al-Islam Gaddafi. IMED LAMLOUM / AFP
Highlights
Saif al-Islam Gaddafi was captured after his father's dictatorship fell in 2011

The son of Libyan dictator Muammar Gaddafi, Saif al-Islam Gaddafi, appeared for the first time in 6 years announcing his intention to re-enter politics and take back control of Libya. 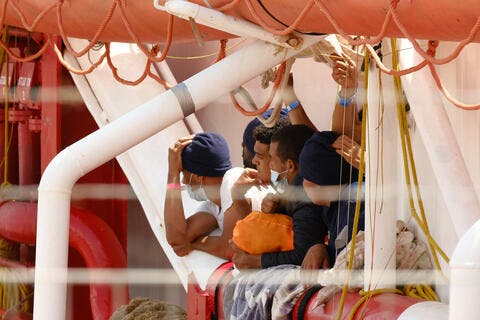 Speaking in an interview with the New York Times, Gaddafi said he intends to 'restore the lost unity' after a decade of chaos that came in the wake of his fathers death, and did not rule out standing for president.

The 49-year-old is still wanted by the International Criminal Court (ICC) for crimes against humanity, and was sentenced to death by a Libyan court in 2015.

Gaddafi, in his first public comments since going into hiding, claimed that despite his conviction he would command widespread support from the Libyan pubic who he says have become frustrated with disparate factions fighting for control.

'It's not in their interest to have a strong government,' he told The New York Times, speaking from a two-storey villa inside a gated compound at Zintan in the west of the North African country. 'That's why they are afraid of the elections.

Before his father's death in 2011 at the hands of of militia, Gaddafi was the presumed successor to rule Libya. He told the newspaper that in the decade since his father's capture and killing, politicians have brought Libyan's 'nothing by misery'.

Re-upping this in light of Saif al-Islam Gaddafi's interview with the @nytimes. As @SameralAtrush says in his thread additions there was push-back against @thetimes for our story but details confirmed in new interview https://t.co/ycDS2GWDjJ

'I've been away from the Libyan people for 10 years,' he said. 'You need to come back slowly, slowly. Like a striptease. You need to play with their minds a little.'

He also refused to apologise for the atrocities committed by his father's regime, and defended his record as leader, claiming that most Libyans now think the government should have taken a harder stance against rebels.

Saif al-Islam is the second son of dictator Muammar Gaddafi who ruled Libya with an iron fist from 1969 to his brutal death in 2011.

He was educated at university in Tripoli before studying for an MBA in Vienna and a PhD at the London School of Economics.

Gaddafi was seen by some as a modernising influence within his father's regime, and was given credit by some for presiding over a brief period of reform and liberalisation in the final years of the dictatorship.

However, his reputation was tarnished when he backed the government's crackdown of anti-government protests in 2011 and warned of 'rivers of blood' if the revolution was not averted. The protests in Libya were part of the Arab Spring.

Estimates very, but as many as 25,000 civilians and soldiers are thought to have been killed in the Libyan civil war.

Like his father, Saif al-Islam was captured. He was found in southern Libya after his father's regime had collapses, and held prisoner by a militia group in Zintan city.

However, the militia group refused to hand him over to the ICC in The Hague, which has indicted him for war crimes allegedly committed during the civil war.

The group permitted him to stand trial in Tripoli via video link, where he was sentenced to death in 2015, but has not been acted upon.

It was later reported that Gaddafi had been released by the militia group, but he didn't appear in public again amid rumours that he was either dead or plotting a political comeback. The ICC called for him to be handed over for trial.

Saif al-Islam said 'he was confident that these legal issues could be negotiated away if a majority of the Libyan people choose him as their leader'.

Son of Libyan dictator Gaddafi, 49, who is wanted for war crimes announces plans to unify nation he fled https://t.co/UCFNySW1p5

In 2018, the Libyan Popular Front party claimed that Gaddafi would run for president as their candidate, but he never made a public appearance.

In 2020, it was reported by Bloomberg that two Russians had been arrested in the country who were allegedly involved in a plot to install Gaddafi as a pro-Moscow president of Libya.

In the interview with the New York Times, Gaddafi claimed that he was now friends with his former captors, saying they 'are now my friends', adding that the militia group realised that he could be a powerful ally.

Libya has been wracked by chaos since the NATO-backed uprising toppled dictator Gadhafi in 2011, and split the North African country between a U.N.-supported government in Tripoli and rival authorities loyal to Hifter in the east, each backed by different armed groups and foreign governments.

A return to power could prove to be difficult for Gaddafi, with a number of potential rivals barring his way.

One such rival would be Khalifa Haftar, the general who controls much of eastern Libya and has Russian and UAE backing. Another, Fathi Bashagar, is Libya's former interior minister and has the backing of Turkey and other Western governments.

Last October a ceasefire was signed that has largely frozen the long-running civil war, but the country remains bitterly divided between the east and west and is full of foreign troops and mercenaries from Russia, the Middle East and Africa.

An agreement between factions has been made to hold election early in December, but diplomats have said they do not hold much hope of the vote going ahead. 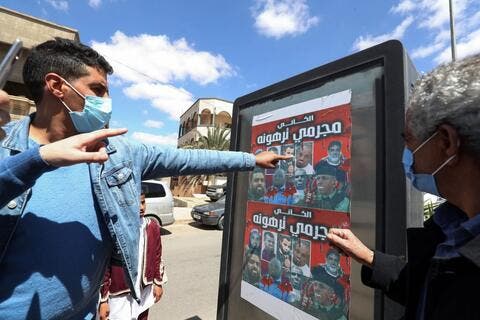 Libya: If Polls Are Delayed We're Back to 'Square One' - Ageela Saleh

'Without them, we die. That's where we get support. We hide here. We fight here. We get support from there. The Libyan people are our ocean.'