Published December 7th, 2021 - 07:08 GMT
Sudanese girls walk past a painting on the wall of a school at the El-Riyadh camp for internally displaced persons (IDP) in Geneina, the capital of the state of Sudan's West Darfur, on February 8, 2017. (Photo by ASHRAF SHAZLY / AFP)
Highlights
Many people injured in West Darfur's violence

At least 48 people were killed in tribal clashes in Sudan’s West Darfur state on Monday, according to local medics. 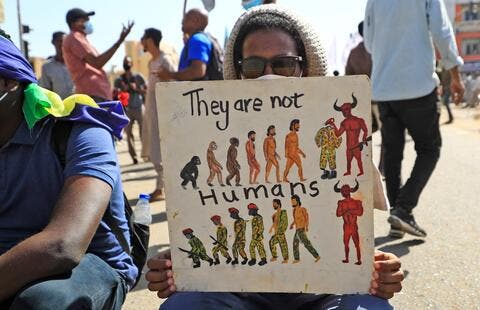 In a statement, the independent Sudan Doctors Committee said scores were injured in the violence in Geneina, the capital of West Darfur.

Sudanese authorities have not released any death toll from the clashes.

Several areas in Darfur witness sporadic deadly clashes between Arab and African tribes, as part of conflicts over land, resources, and grazing paths.