Published March 31st, 2022 - 09:28 GMT
Turkish writer Hatice Cengiz (R), fiancée of Saudi journalist and dissident Jamal Khashoggi, poses next to a portrait of Khashoggi after unveiling it on the National Mall in Washington, DC., on October 1, 2021, during a memorial ceremony marking the third anniversary of his murder at the Saudi consulate in Istanbul. (Photo by Nicholas Kamm / AFP)

A Turkish prosecutor asked an Istanbul court to dismiss the case of the gruesome murder of Riyadh critic Jamal Khashoggi and transfer it to Saudi Arabia, local media reported on Thursday. 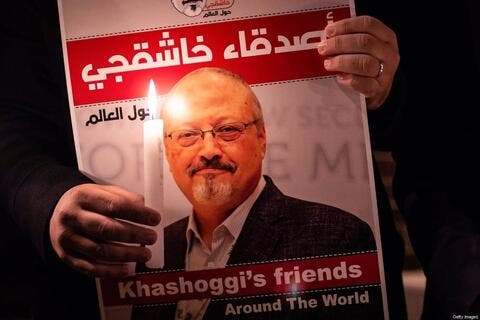 The development comes as Turkey is seeking a thaw in relations with Saudi Arabia, which worsened after the 2018 killing of Khashoggi, a contributor to The Washington Post, inside the Saudi consulate in Istanbul.

The prosecutor said during the hearing in Istanbul on Thursday that the case "has been dragging because the court orders cannot be executed on the grounds that the suspects are foreign nationals," the private DHA news agency reported.

The court is expected to approve the justice ministry's request to transfer the case to Saudi Arabia, the news agency said.

On October 2, 2018, Khashoggi entered the Saudi consulate in Istanbul to file paperwork to marry his Turkish fiancee. According to US and Turkish officials, a waiting Saudi hit squad strangled him and dismembered his body, which has never been retrieved.

Turkish President Recep Tayyip Erdogan said at the time that the order to kill "came from the highest levels" of the Saudi government.

Unsatisfied with the trial in Saudi Arabia, Turkey has launched its own investigation into the murder and put 26 Saudis on trial in absentia including two who are close to the crown prince.

Erdogan said in January he was planning a visit to Riyadh -- which would come at a critical moment for Turkey, where inflation is surging to over 50 percent.

The next hearing is scheduled for April 7.