Published August 5th, 2021 - 05:21 GMT
A local wearing a face mask carries goods along a road in the vicinity of a forest fire close to the Kemerkoy Thermal Power Plant, at Oren in Milas, northen Turkey on August 4, 2021. Yasin AKGUL / AFP
Highlights
1st wildfires emerged one week ago, with 16 still ongoing in 7 southern/southwestern Turkish provinces

Turkey's agriculture and forestry minister announced to successfully brought down a total of 167 wildfires that have emerged a week ago.

The National Defense Ministry said on Twitter that the Air Force Command continues to provide airspace use permits, monitoring and coordination of flight traffic, and ground support services for fighting the fire.

"In addition, the unmanned aerial vehicles (UAVs) of our Air Force Command monitor the fire zones from the air 24/7, and provide instant image transfers," it added.

Wildfires are closing in on a power station in southwestern Turkey @Ali_Mustafa reportspic.twitter.com/nn60cpo0Z2

Through extensive surveillance by drones, the size of the fire can be assessed more quickly and a precision response can be done. 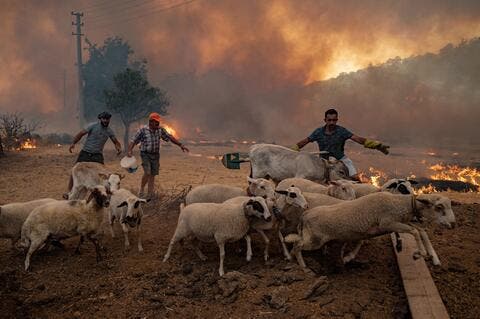 Turkish army UAVs get real-time visuals in wildfire-prone areas and share them with a coordination center that sends them to aerial firefighting vehicles, telling them the location and direction of wildfires.

Working to detect and locate fires, unmanned aerial vehicles (UAVs) have so far logged 462 hours in the air.​​​​