Published November 2nd, 2021 - 12:11 GMT
Afghan medical staff members (C) stand at the entrance of a hospital as they wait to receive the victims of blasts in Kabul on November 2, 2021, after Afghanistan's capital was hit by two blasts near a military hospital, Taliban officials said, with a witness also reporting gunfire. (Photo by AFP)

Multiple explosions have rocked Afghanistan’s capital, leaving at least 19 people dead and dozens of others injured, as the war-ravaged country continues to grapple with fresh security challenges. 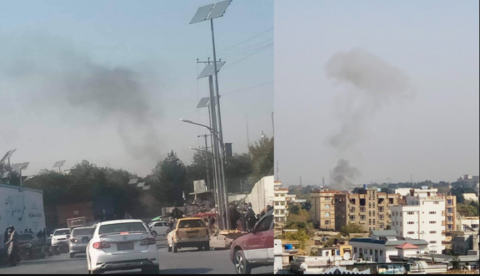 Twin Explosions Heard Near a Military Hospital in Kabul

Allegedly operation was conducted by #ISIS_K

The explosions, followed by indiscriminate gunfire, led to chaos inside and outside the busy hospital, reports quoting eyewitnesses said.

At least 43 had been wounded in the attack until last reports came in. The casualty toll is likely to mount as many have been admitted to hospitals in a critical condition, reports said.

Khosty said the Taliban’s special forces had rushed to the scene to secure the area.

Afghanistan’s private TV Tolo News, citing an Italian NGO that runs a separate hospital in Kabul, said the hospital had received some ten people with injuries from the blast site.

There was no immediate claim of responsibility for the attack, but according to Kabul-based Bakhtar News Agency, a number of Daesh terrorists had entered the hospital and clashed with security forces.

The hospital had come under terrorist attack in 2017, when gunmen disguising as medical personnel killed at least 30 people.

There have been a series of terrorist attacks across Afghanistan in recent weeks, mostly claimed by the Daesh terrorist group, which is engaged in fierce power rivalry with the Taliban.

Today’s attack is the worst since the twin bombings outside the Hamid Karzai International Airport in Kabul late August, which killed at least 175 people.

Senior Taliban officials have unequivocally blamed the US for the resurgence of Daesh, which ironically coincided with the botched exit of the US-led coalition forces from Afghanistan mid-August.

The US-led NATO alliance invaded the South Asian country in 2001 under the pretext of ‘war on terror’, to decimate the Taliban and Al-Qaeda. None of the goals were achieved despite massive investment.

Incidentally, Tuesday’s attack came on the anniversary of the deadly attack on Kabul University, which killed scores of students.