Published August 19th, 2019 - 10:59 GMT
Democrat US Representatives Ilhan Abdullahi Omar (L) and Rashida Tlaib during a press conference, to address remarks made by US President Donald Trump earlier in the day, at the US Capitol in Washington, DC on July 15, 2019. (AFP/ File Photo)
Highlights
Freshmen Congresswomen Rashida Tlaib and Ilhan Omar posted an anti-Semitic political cartoon to their Instagram stories.

In a continued feud between Israel and Representative Ilhan Omar and Rashida Tliab, the two congresswomen drew backlash after posting a cartoon this weekend depicting their voices being silenced by Donald Trump and Israeli Prime Minister Benjamin Netanyahu.

Tlaib, whose parents are Palestinian, and Omar, who fled Somali for the U.S. when she was younger, posted a political cartoon to their Instagram stories where Trump's hand was over Omar's mouth and Natanyahu's hand over Tlaib's.

Batya Ungar-Sargon, an opinion editor with the Jewish Daily Forward, pointed out that the cartoon creator, Carlos Latuff, has a history of creating images with anti-Semitic themes.

Latuff posted the cartoon to his Twitter on Friday, claiming in the post that Trump and Netanyahu have waged a war on free speech and against the freshmen congresswomen.

'Trump-Netanyahu's war on @RashidaTlaib and @IlhanMN is a war against freedom of speech, a war against everyone who dare to criticize #Israel's apartheid,' he tweeted.

Latuff has a history of creating anti-Semitic cartoons and using the Holocaust to criticize Israel's treatment of Palestinians. In 2006 he entered one of such cartoons into the Iran Holocaust Cartoon Contest, which earned him second place.

This week Netanyahu announced he was banning Omar and Tlaib, both outspoken supporters of the Palestinians, from visiting Israel.

The Israeli prime minister made the announcement about an hour after Trump said it would show 'great weakness' for Netanyahu to allow Tliab and Omar to obtain entry into the country.

'It would show great weakness if Israel allowed Rep. Omar and Rep. Tlaib to visit,' Trump tweeted Thursday morning. 'They hate Israel & all Jewish people, & there is nothing that can be said or done to change their minds. Minnesota and Michigan will have a hard time putting them back in office. They are a disgrace!'

Omar slammed Netanyahu for the move, claiming he was essentially implementing Trump's 'Muslim ban' by barring her and Tlaib from visiting the Jewish state. Earlier in the Trump administration, the president signed an order that barred individuals from several Muslim-majority countries from visiting the U.S. – including Tliab's home country of Somalia.

'It is an affront that Israeli Prime Minister Netanyahu, under pressure from President Trump, would deny entry to representatives of the U.S. government. Trump's Muslim ban is what Israel is implementing, this time against two duly elected Members of Congress,' the Minnesota Democrat said in a statement.

Omar, who along with Tlaib is an outspoken supporter of Palestine, used her statement to criticize Netanyahu for his treatment of Palestinians.

Tlaib and Omar were preparing to make a trip to the region that included a stop at the Al-Aqsa Mosque, the third holiest site in Islam. It sits close to the site of the Second Temple, the holiest site in Judaism, making it a hot spot in the Israeli-Palestinian conflict.

'Sadly, this is not a surprise given the public positions of Prime Minister Netanyahu, who has consistently resisted peace efforts, restricted the freedom of movement of Palestinians, limited public knowledge of the brutal realities of the occupation and aligned himself with Islamophobes like Donald Trump,' the congresswoman said.

Tlaib, meanwhile, tweeted a photo of her grandmother Muftia Tlaib, who lives in the occupied West Bank, and said Israel's decision to 'bar her granddaughter' from visiting was a 'sign of weakness.'

'This woman right here is my sity. She deserves to live in peace & with human dignity. I am who I am because of her. The decision by Israel to bar her granddaughter, a U.S. Congresswoman, is a sign of weakness b/c the truth of what is happening to Palestinians is frightening,' the Michigan Democrat wrote.

Earlier in August, the State Department updated its definition of 'anti-Semitism' to include 'Drawing comparisons of contemporary Israeli policy to that of the Nazis.'

In 2008, Latuff defended his anti-Semitic cartoons, and he reposted a link to the interview on Sunday morning. 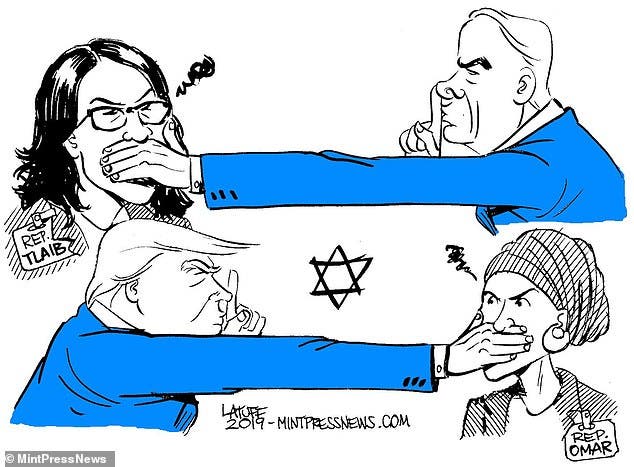 When discussing his controversial artwork, Latuff defended his use of the Holocaust to criticize Israel's treatment of Palestinians.

'Of course Israel isn't building gas chambers in the West Bank, but surely we can find some similarities between the treatment given to Palestinians by the [Israel Defense Forces] and the Jews under Nazi rule,' Latuff said.

Tlaib and Omar – part of 'the squad' that includes Alexandria Ocasio-Cortez and Ayanna Pressley – are the first two Muslim ever women elected to Congress.

Netanyahu said the lawmakers' visit was designed to 'hurt' Israel, citing their support of a boycott Israel movement that wants the country to abandon the occupied territories.

The two representatives support the Boycott, Divest, and Sanctions movement, which aims to end international support for Israel because of its policies toward Palestinians and its continued construction on the West Bank.

'Their intent is to hurt Israel and increase its unrest against it,' Natanyahu said of Tlaib and Omar's intentions in wanting to visit Palestinian territories in Israel.

Under Israeli law, backers of the movement BDS movement can be denied entry into the country.

'Representatives Omar and Tlaib are the face of the Democrat Party, and they HATE Israel!' Trump tweeted after Netanyahu made his decision.