A recent visit by the US President may have given UAE, Saudi Arabia and other coalition partners (Libya, Egypt, Bahrain, Yemen, Mauritius) an opening to proceed with unprecedented punitive measures against the State of Qatar.

These measures are designed to compel Qatar to align with the Saudi-led consensus on Iran. Qatar’s support for the Muslim Brotherhood and alleged support for groups such as the Taliban and Al Qaeda, which Doha has hosted in the past, have long been a source of friction with Saudi Arabia and the UAE. In addition Saudi Arabia has implicated Qatar in the support of Shiite militants in eastern Saudi Arabia and Bahrain.

Earlier this week Saudi Arabia also blocked Doha based Al Jazeera - a channel which allowed Qatar to have a role in global policy debates, and has not been afraid in the past to contradict the GCC’s heavily Saudi influenced positions.

It is unclear whether the past week represents a profound disagreement between GCC states that may eventually be resolved, or a changing political formation which could affect the constitution of the GCC alliance in the future.

Remarks from President Donald Trump on twitter seem to suggest tacit recognition - if not support - for the actions taken. 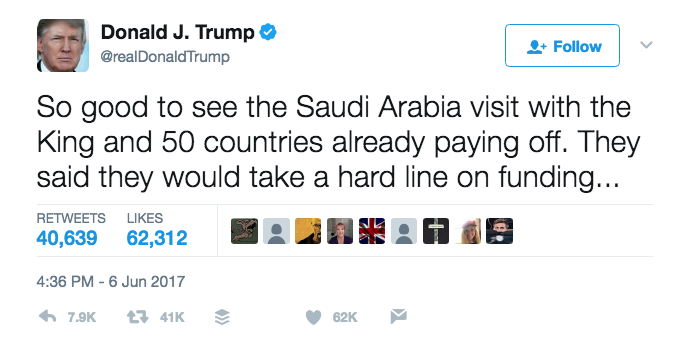 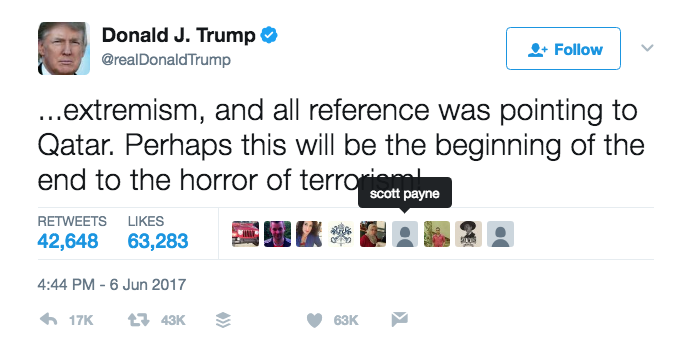 This is surprising, given that Qatar is home to the second-largest US military presence in the region. The al-Udeid Air Base in Qatar hosts the command center which co-ordinates flights against the Islamic State - a campaign which very much depends on a sense of unified Sunni purpose. There are reports that the US military has confirmed its existing military posture in Qatar, alongside reports to the contrary.

In addition to the statements of the US President, there are also policy circles within Washington DC who have long lobbied for a harder line against Iran and Qatar.

The Washington-based “Foundation for Defense of Democracies” [FDD], is reported to have held a pre-arranged press conference on May 23rd titled “Qatar and the Muslim Brotherhood’s Global Affiliates: A New U.S. Administration Considers New Policies." According to Stratfor, remarks at the Conference and a series of editorials written by participants argued that US policy should have as its emphasis to “oastracie, isolate and delegitimize” the Muslim Brotherhood and their sponsors in Qatar. The depiction of the Muslim Brotherhood as a “gateway drug” for violent Islamists was made.

More pointedly, the group explored options for the movement of the US airbase out of Qatar to the UAE or Saudi Arabia. In regard to this issue, Stratfor writes as follows:

“Even attempts were made to lure Stratfor into this media barrage with an interview request from an Emirati media outlet containing leading questions that were obviously designed to denigrate Qatar and fuel speculation that the United States would withdraw from its base in Qatar.”

The Intercept has also covered the role of the Foundation in an article entitled “Hacked Emails Show Top UAE Diplomat Coordinating With Pro-Israel Think Tank Against Iran,” including an alleged email list targeting companies seeking to invest in Iran.

Both sources provide some credence to suggestions that a coordinated alignment against further rapprochement with Iran is forming in the Gulf, Israel and in parts of Washington.

Conclusions: A Pyrrhic Return to US Influence in the Region?

Intra-group rivalry within the GCC may play some role in returning United States influence to the region after the Obama Administration's “Pivot to Asia.” GCC rivalry may also raise questions about the utility of the Arab coalition against DAESH.

Increased US influence will be illusory in the longer term, if it is not based on a deep understanding of the conflicting agenda’s and military, economic and strategic priorities in play. A full risk assessment in regard to the rapprochement with Saudi Arabia does not have appear to have been taken by the current US administration; or at the very least its strategic imperatives do not appear to be clear.

The constructive ambiguity we are seeing from the Unites States seems to be part of broader policy move to isolate Iran. It remains to be seen whether Saudi Arabia can be a trusted partner in this process, or will use current momentum to push for its own priorities in the region and elsewhere.

Regardless, the suggestion that the current diplomatic crisis with Qatar will be “the beginning of the end of horror of terrorism” is a simplification that may come back to haunt the current US administration in future.