Published December 9th, 2021 - 10:58 GMT
Sudan's Prime Minister Abdalla Hamdok (R) meets with the US Special Envoy for the Horn of Africa Jeffrey Feltman in the capital Khartoum on September 29, 2021. (Photo by ASHRAF SHAZLY / AFP)
Highlights
Jeffrey Feltman to discuss with counterparts 'what it is that the international community seeks' on Ethiopia crisis

US Special Envoy for the Horn of Africa Jeffrey Feltman will depart Thursday for the United Arab Emirates (UAE), Turkey and Egypt to discuss the Ethiopian conflict, a State Department spokesman said Wednesday. 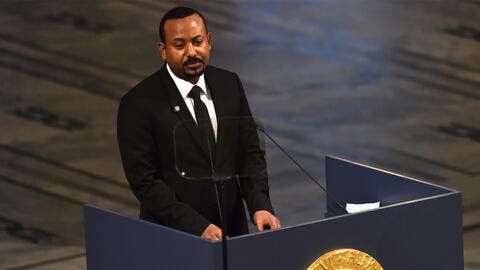 Conversation with Amb. Jeffrey Feltman US Envoy for HOA. #Ethiopia. @NeaminZeleke @BilleneSeyoum
My thanks for @StateDept @StateDeptSpox and their staff. I hope we will get more time next time. @mamamesay

Full interview will be available tonight on ESAT YouTube. pic.twitter.com/DJX1TFu9h1

Ned Price said Feltman will discuss with his counterparts "what it is that the international community seeks when it comes to Ethiopia, and that is chiefly a negotiated resolution to the conflict because we know that the conflict threatens the peace and security in the Horn of Africa."

Price reiterated that there is no military solution to the conflict in Ethiopia.

Feltman is leaving to pursue support for diplomacy as the first and the only option to achieve a cessation of hostilities, Price said at a news conference.

Enjoy the Vicki show
We are sensing hints of change in the US policy towards Ethiopia. Jeffrey Feltman's ESAT appearance is one. But in a span of two weeks, the former diplomat think the internet is gracious enough to forget. #NoMore https://t.co/gLAQ69ZZaz pic.twitter.com/Xm0OLtZdve

Now in its 13th month, the armed conflict between government forces and fighters from the Tigray People's Liberation Front (TPLF) has claimed thousands of innocent lives and left many others facing famine-like conditions as affected areas are cut off from international aid.