World Nations Condemns The Violence by The Myanmar Military

A dozen nations, top United Nations officials and the European Union condemned Myanmar's security forces following one of the bloodiest days of protests in the country since February's military coup.

In a joint statement, the Chiefs of Defense of Australia, Canada, Germany, Greece, Italy, Japan, Denmark, the Netherlands, New Zealand, South Korea, Britain and the United States urged Myanmar's armed forces to "cease violence and work to restore respect and credibility" they said it has lost since the coup.

"A professional military follows international standards for conduct and is responsible for protecting -- not harming -- the people it serves," they wrote.

At least 114 people, including a 13-year-old girl, were killed by regime troops during protests on Saturday.

A 1-year-old baby was also injured after being shot in the eye with a rubber bullet in Yangon while playing in an area where troops were located.

U.S. Secretary of State Antony Blinken offered a message of solidarity to the people of Myanmar in a tweet Saturday evening. 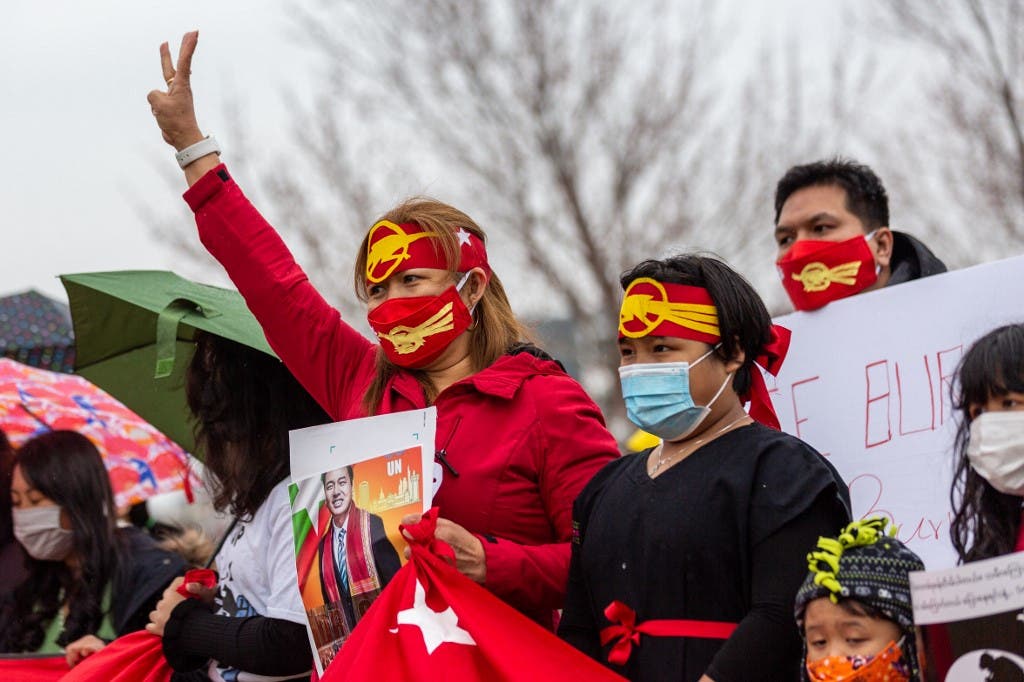 "We are horrified by the bloodshed perpetrated by Burmese security forces, showing that the junta will sacrifice the lives of the people to serve the few. I send my deepest condolences to the victims' families. The courageous people of Burma reject the military's reign of terror," he wrote, using the country's former name.

Alice Wairimu Nderitu, U.N. special advisor on the prevention of genocide, and Michelle Bachelet, U.N. high commissioner for human rights, issued a joint statement on Sunday warning of the heightened risk of atrocity crimes being committed by the junta through lethal, systematic, widespread and increasing attacks against peaceful protesters.

"The shameful, cowardly, brutal actions of the military and police -- who have been filmed shooting at protesters as they flee, and who have not even spared young children -- must be halted immediately," the pair said. "The international community has a responsibility to protect the people of Myanmar from atrocity crimes."

Tom Andrews, the U.N. special rapporteur on the situation of human rights in Myanmar who has been calling for stronger actions against the military known as the Tatmadaw, urged the U.N. Security Council to act, stating "it's their job" to do so.

"Members should urgently produce a resolution on Myanmar & put it to a vote," he said on Twitter. "Nations who stand [with] the people of Myanmar can work together to stop the flow of junta revenue & weapons & hold them accountable."

This photo taken and received from an anonymous source via Facebook on March 25, 2021 shows security forces holding weapons on a street in #Taunggyi in #Myanmar's Shan state, during a crackdown on protests against the military coup. Photo: AFP pic.twitter.com/cgKTEyRi7o

The death toll from the junta rose to at least 459 on Sunday after 13 people were killed, according the daily update by Myanmar's Assistance Association for Political Prisoners.

One person was injured as armed forces opened fire at the Asia Royal Hospital in Yangon while pursuing protesters who took refuge from gunfire inside, Myanmar Now reported.

A staff member who was leaving at the time was shot in the leg with a rubber bullet.

A total of 2,559 people have been detained, arrested or charged following the coup, the AAPP said.

The EU warned the junta to stand down "from this senseless path" or it would employ punitive measures, including further sanctions, to target those responsible for blocking Myanmar's democracy.

"This tragedy must stop," the EU High Representatives Josep Borrell said in a statement. "The perpetrators of these serious human rights violations must be held to account for their shameless acts."

EU, Britain, the United States and Canada have imposed sanctions in connection to the coup.

Myanmar's Civil Disobedience Movement, which has been leading the protests, told the international community Sunday that they will win this fight and that they have called on ethnic armed groups to protect civilians.

"We will fight and win our own struggle," the group said in a statement. "All we ask from you is not to support the murderous junta by any means."

Protests have continued in the nation since the Feb. 1 coup in which the military overthrew and detained the nation's civilian leader and other high-ranking elected officials after making unsubstantiated claims of election fraud.