Published June 14th, 2021 - 09:47 GMT
Vanessa Hudgens proudly shows off her 10th tattoo... a boa constrictor along inside of her left ankle
Highlights
Vanessa Hudgens is amassing quite the collection of tattoos up and down her petite 5ft1in figure.

on Sunday, some 15 months after debuting her 'divine feminine angel' tattoo, the High School Musical alum took to Instagram to unveil her latest piece of body ink, which is the 10th in her seemingly growing collection.

This time around the actress and singer, 32, had artist @drag_ink etch a boa constrictor snake along the inside of her left ankle

In the first photo, Hudgens had her black denim pants rolled up to the top of her calf to showcase the new piece.

She had her right arm raised into the air, in a show of excitement, with her right foot pointed to the floor as she looked directly into the camera.

'ANOTHER ONE! Lol lucky #10 @drag_ink,' she wrote in the caption, in references to the artist and reaching double-digits in tattoos.

The second snap gave her 41.2 million Instagram fans and followers a closer look at the snake - that started around the ankle and slithers upwards towards the back of her calf.

'I love the feeling of a tattoo,' Hudgens declared in a short video, all while the artist was working on the piece.

At the time, The Princess Switch star was laying on her side with her left pant leg rolled up to allow more access to her ankle. 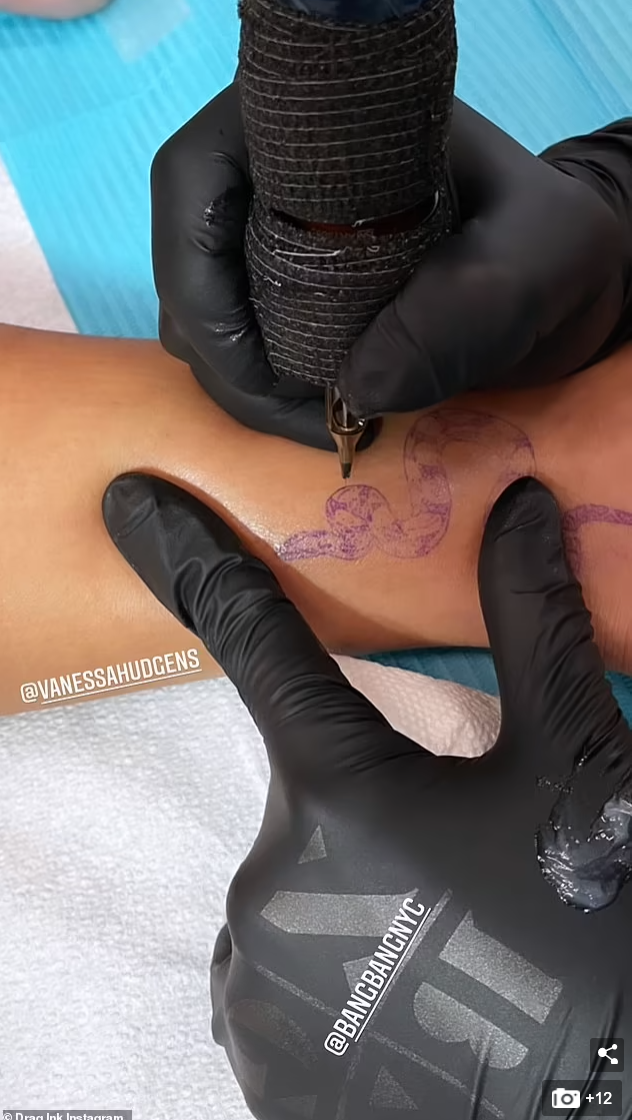 Initially, Hudgens stared directly into the camera, dressed in a casual-cool ensemble consisting of black jeans and matching crop top, but within seconds she moved the shot towards her legs and the artist working on the piece.

Taking pride in his work, @drag_ink, shared the same two photos on his Instagram page, but also added a third of his client sitting on a table with her snake tattoo on full display.

'@vanessahudgens with boa it's beautiful! Thank you again,' he wrote in the caption alongside the image that gives followers a better view at her crop top and jeans ensemble.

He also shared several more photos and video clips that were shot during her time at the shoppe, including one that revealed GG Magree was with Hudgens at the time. 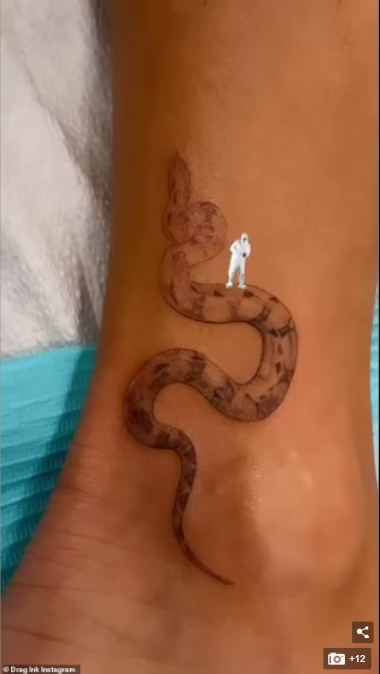 During the duration it took to get the new piece done, Hudgens wore a protective mask over her mouth and nose, as a precaution, with COVID-19 still posing a potential danger to some of those who have not gotten vaccinated.

The Bad Boys For Life actress shared photos of what was likely her last tattoo, a nude angel, back on March 5, 2020.

'Divine feminine angel.. not me.... my tat. But you can call me that, if you want to #thirstythursday @drag_ink,' she explained in the caption.

The angel, which was done by Bang Bang Tattoos artist Dragon, was etched into the right side of her midriff and ribcage region. 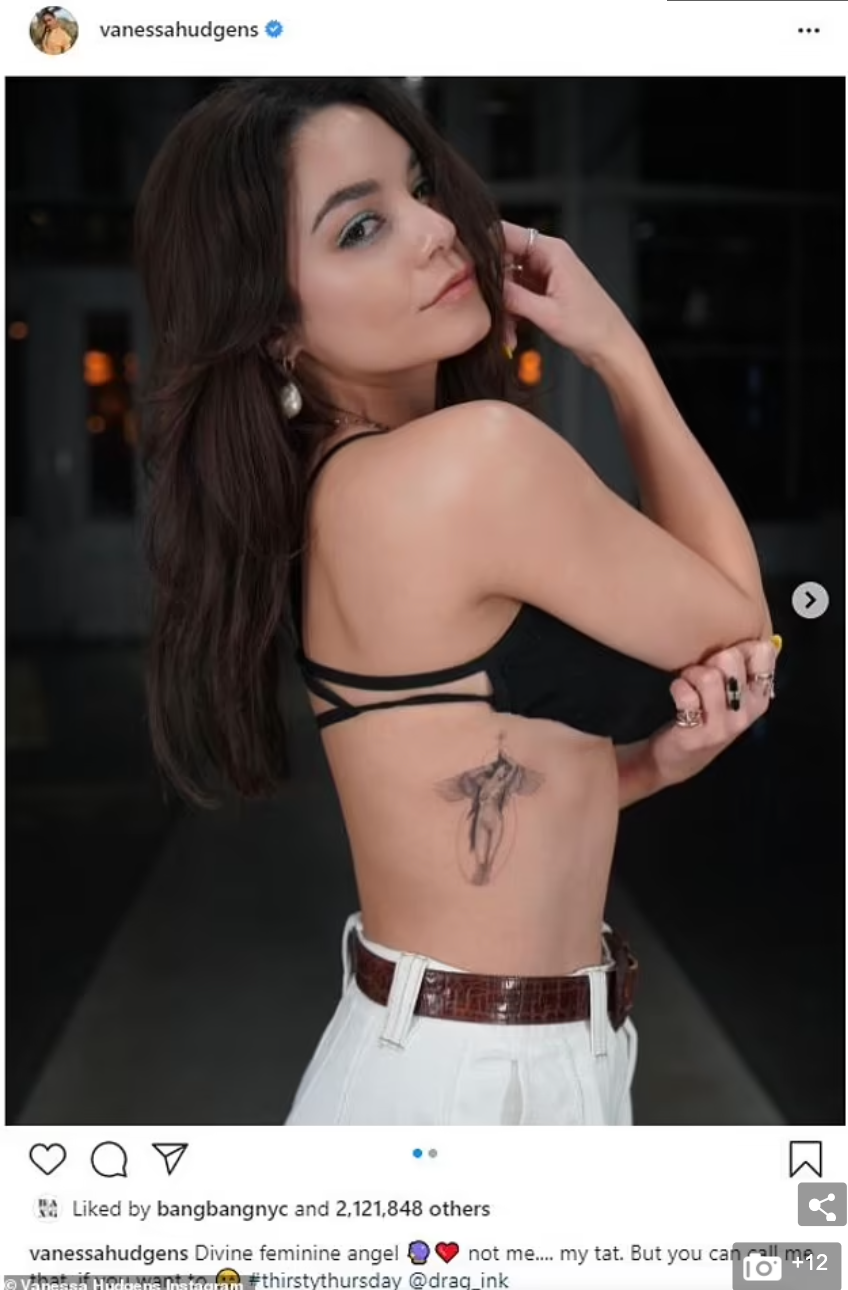 She also posted a video showing her initial reaction to the angel tattoo just after it was completed. Hudgens was over the moon with excitement. 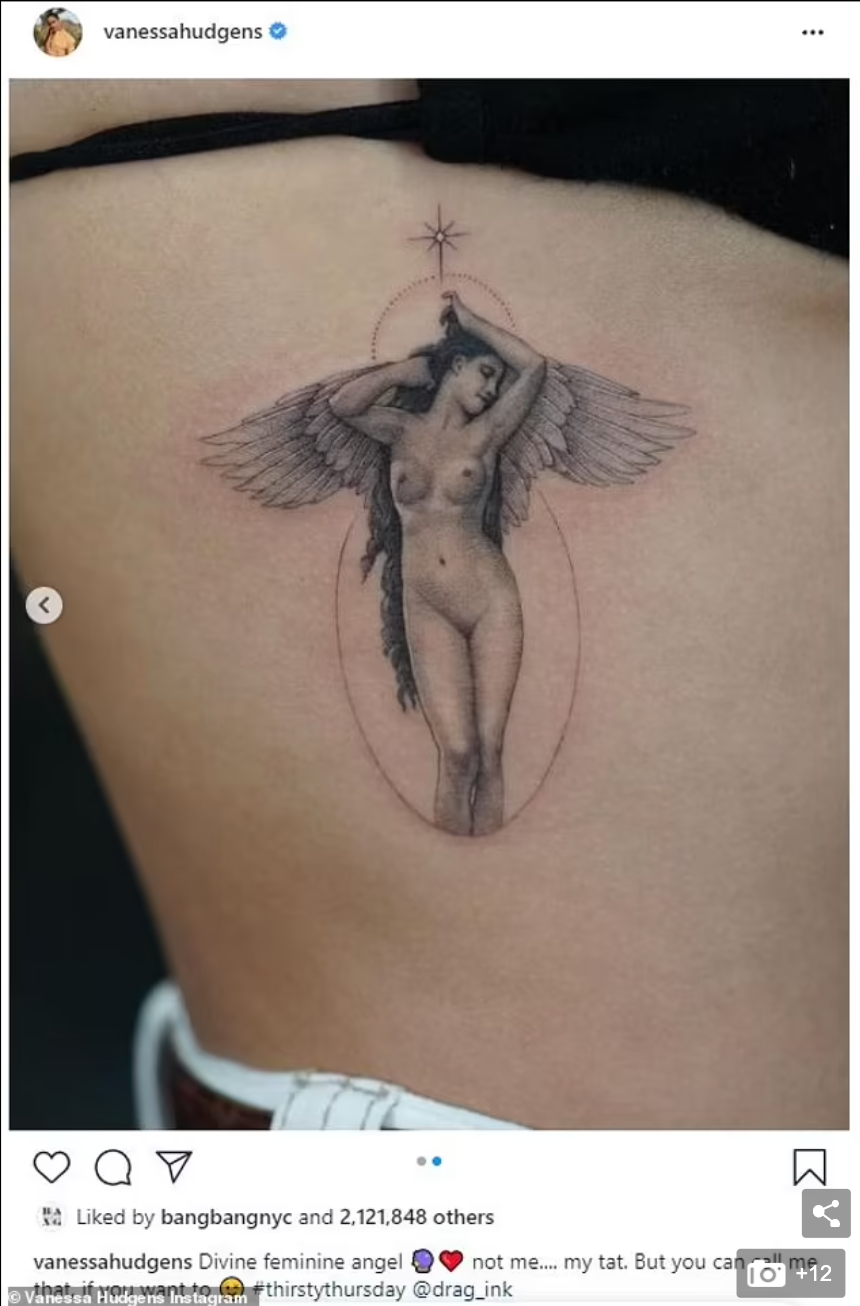