ALBAWABA - Morocco fans worldwide celebrated their team's victory over Spain on penalties during the match which took place at Qatar’s Education City Stadium. 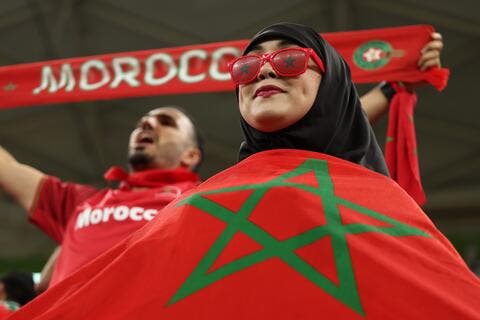 Football fans screamed, jumped, sang and danced across the streets as this is the first time an Arab football team reaches the FIFA World Cup quarter-final.

A video has gone viral on social media with over 4 million views where a Moroccan fan was standing next to the bus carrying the Spanish team. He starts to mock the team after losing the game by saying: "Hey, good luck, you are a good team." The man continues: "Airport, this way."

A Kenyan worker at a Qatar metro station became popular for singing the words: "Metro, this way." He became a TikTok trend and fans are now been commonly using the phrase.

Moroccan fans across the world, including Gaza, have taken to the streets to celebrate their team's victory over Spain. They carried the national flag, danced and sang in the streets as this is the first time an Arab team reaches this stage ever.

Fans have also taken Morocco's win to social media to congratulate the team for their intensive effort during the game. A person wrote: "The total population of Morocco suddenly grew by 1.6 billion."

Morocco celebrates their victory by raising the Palestinian flag 🇵🇸. Palestine has been the winner in this World Cup. Arab regimes can pursue normalisation, but the people of the Arab world will have the final say. Congratulations Morocco for your victory and principled stance 🇲🇦 pic.twitter.com/eTrNQWhelB

The Moroccan football team carried out the Palestinian flag as they were celebrating knocking Spain out of the world cup and becoming the fourth African team to reach the World Cup quarter-final.