Taking to Twitter and Instagram as a final refuge, Jordanian Kuwaiti actress Dana Masaeed has posted screenshots of death threats she received on Instagram, calling on UAE authorities and her fans to rescue her. Help her so that she is not the next victim!!!! pic.twitter.com/gaVyrmG3iM

The actress who was born to a Jordanian father and a Kuwaiti mother who lives in the UAE after her parent's divorce said that her relatives from her father's side are threatening to kill her if she does not go back to live with them.

According to the screenshot she posted, the individual she couldn't identify asked her to "say her final goodbyes to loved ones she will never see again," saying that "the family will get her back and wash the shame away."

Dana Masaeed also posted several Instagram stories in which she spoke to her audience about what she is facing and about past abuses she has faced from her family in Jordan who, according to her words, "has always tried to separate her from her Kuwaiti mother."

Masaeed also told her followers that the people who are texting her have successfully located her, which means that they can carry out their threats at any moment, urging UAE authorities and the Jordanian Embassy in Abu Dhabi to take action to protect her. 'Killed Her, Drank Tea Beside Her Body': Jordan Mourns Yet Another Woman, Demands Legal Reform 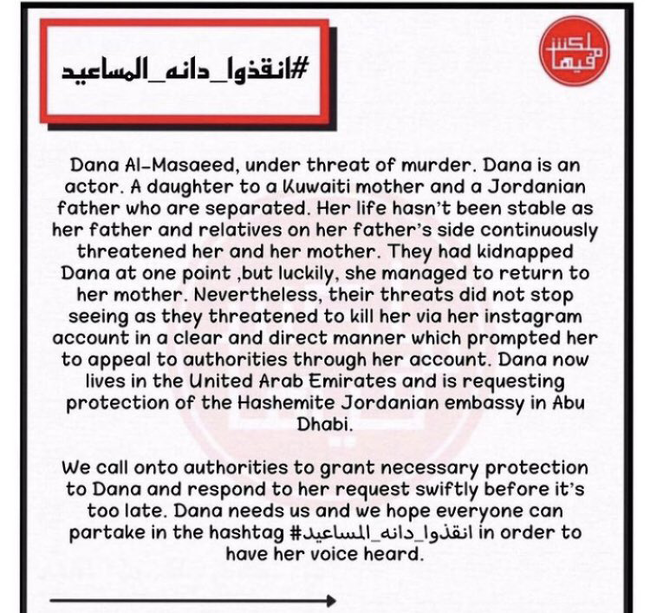 Dana Masaeed's words have prompted social media users to launch the hashtag #انقذوا_دانه_المساعيد (Rescue Dana Masaeed), in which they expressed their hopes that she is safe and protected. The hashtag has been trending in Jordan, Kuwait, and the UAE.

Dana Masaeed was born in Kuwait in 1996 and has been featured in several Kuwaiti drama series since 2009. Her career started with well-known Kuwaiti comedian Tariq Al-Ali. Her latest TV appearance was in the 2016 Ba'd Al-Nehaya.

Are The Talibans Fighting Over Cabinet Posts?

8 Out of 10: Smoking Poses a Major Challenge to Jordan

Blinken: The Iran Nuclear Deal May Never be Rescued