The Internet Is Signing Up: Trump’s Social Media Network Is Live Now, but...

Last March, former US President Donald Trump promised the world that he will "be back to cyberspace soon", after months of indefinite suspensions on the internet's social media networks. 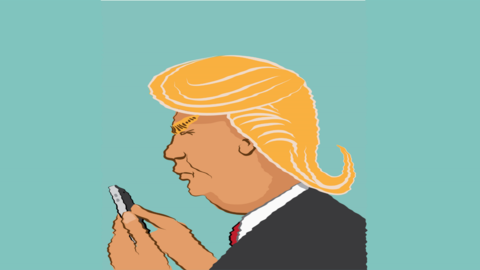 Stay Tuned; Donald Trump Will Be Back in Our Lives Soon

Donald Trump has delivered his promise recently, launching his own social media platform, called "Truth Social", hoping to provide his followers with a proper alternative space via the internet, after his supporters have been facing huge difficulty being connected to the former president.

The escalation between the internet world and Donald Trump reached a deadlock last January, following the Capitol insurrection events which led to several deaths, all believed to have been provoked by Trump, who was preparing to leave the White House at that time.

Although the site is not officially open, a URL was discovered allowing users to sign up anyway. pic.twitter.com/MRMQzjNhma

Yet, many online users have been reporting a variety of surprises as soon as they checked out Truth Social.

First, new users have taken screenshots of the terms and conditions they had to agree to as they were signing up for the network, including an article that warned users against harassing or annoying the site or any of its staff members.

The terms and conditions of Trump's new social site are VERY specific that you can't harass or annoy it or its staff— but says nothing about other users. pic.twitter.com/8EmBlAFF3b

Another rule justified banning users who "disparage, tarnish, or otherwise harm, in our opinion, us and/or the Site," without explaining who the "us" referred to.

Finally, one Twitter user posted a screenshot saying that has been able to create an account with Donald Trump's name on the website, without being verified.

This comes at a stressful time for almost every social media network around the world, especially the Facebook group which has suffered a series of glitches recently, including one during which service was down for about 6 hours earlier this month. Ever since reports have noted that Facebook's executives are considering rebranding the company.