Published July 18th, 2022 - 11:23 GMT
Actors are pictured in the Hajar al-Aswad neighbourhood of the Syrian capital Damascus on July 14, 2022, during the filming of a scene in a film titled "Home Operation". (Photo by LOUAI BESHARA / AFP)

Have Syria's destructed buildings and war-torn regions become a hot spot to produce movies? Jackie Chan was blasted after news of his latest movie being shot in Hajar Al Aswad, south of Damascus, Syria. 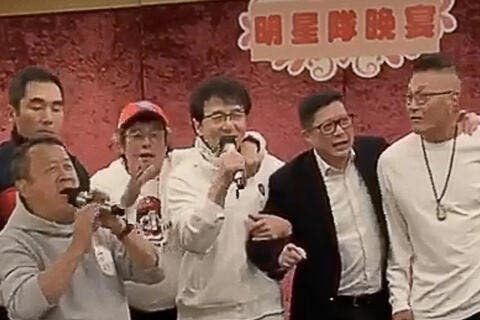 Jackie Chan's new movie, entitled Home Operation which was announced last year, began its partial production in Syria's Hajar Al Aswad region, known as the ghost town. The region fell under the Islamic State (ISIS) control during the civil war but the Syrian forces announced retaking power there in May 2018.

It is China’s first movie in Syria and reportedly features @EyeOfJackieChan as executive producer. 3/3 https://t.co/D5vmw9MFCJ

Jackie Chan's film has drawn massive discussions across social media as people argued whether war-torn towns should now become a spot for making movies saying that the movie is funding war criminals which it shouldn't.

A person suggested the reason behind filming such movies in places like Syria and not special building studios go to the fact that studios' costs are ten times higher than affording such places which usually cost less regarding newly-war recovery, the country's devastated economy, and its broken currency.

🚨🚨🚨Brace for hours of massive CCP propaganda in "Home Operation" (家園行動), a movie — produced by CCP shill Jackie Chan — that glorifies China's 2015 evacuation of Chinese and other foreign citizens from the war in Yemen.

On the other hand, some people liked the idea of the Jackie Chan movie being shot in Syria justifying that the long-lasted civil war has ended in Syria and people should join efforts in reconstructing the regions ruined by the war.

To exploit that for money — for a movie lauding #China & involving #Syria’s regime facilitation is appallingly bad taste. https://t.co/9xhRmnONwj

Home Operation is based on the early stage of the civil war in a Middle Eastern country in 2015. The Jackie Chan movie is inspired by China's evacuation of Chinese and other foreign citizens from the war in Yemen, Digital Studio Me reported.

According to media sources, Jackie Chan, who's an actor, filmmaker, and martial artist, is not expected to visit Syria, where the movie is being partially produced, despite the fact that he's the executive producer.

A film produced by Jackie Chan is using a film location in Syria that was destroyed by the Assad regime. pic.twitter.com/OfizD2jo2r

The director and co-producer Song Yinxi said: "The pandemic has delayed the launching of this film, but in October, the shooting in will start in the UAE, then Lebanon and other Arabic countries. Hopefully we put it on air before summer 2022".

#Jackie_Chan and his team are filming the movie "Home Operation" in "Al-Hajar Al-Aswad" in the countryside of #Damascus #Syria. He lives in the homes of the displaced and sleeps in their bedrooms. He films their children's rooms and steals their dreams. shame

Fang Shilong SBS MBE PMW, known professionally in English as Jackie Chan, is a Hong Kong actor, filmmaker, martial artist, and stuntman. Chan started his career in the 1960s, participating in over 150 films. He is one of the most popular action film stars of all time.