Two days after oxygen outage in Salt's public hospital resulted in at least 8 confirmed deaths amongst COVID-19 patients, protests have continued to rock several Jordanian cities, despite the daily curfew imposed starting from 7 pm across the country.

Even though the country's health minister has resigned following the oxygen outage, many voices amongst the Jordanian public are still expressing anger and dissatisfaction with the approach their government has taken to tackle the coronavirus outbreak, especially as the country hit a new high record of 9417 new daily cases, besides more than 80 new deaths. 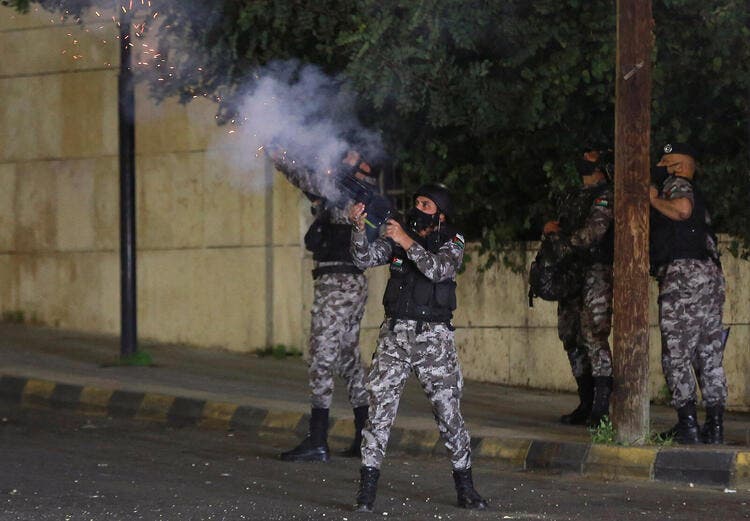 Yup. For most of #Jordan, we are going to have slowed Internet for much of the night amid threats of evening protests and Facebook livestreams of curfew-breaking demos.

Pretty darn inconvenient if you also work on US time..... https://t.co/TZVvMG7aiX

Defying the daily curfew imposed by a series of defense orders the Jordanian government has announced over the course of one year of the health crisis, hundreds of protesters have taken to the streets near Amman's downtown.

Translation: "You could easily think these are clouds but the heavy tear gas is being used in residential areas in Jabal Al Taj and Hai Al Tafaileh"

Translation: "We care about your health, this is why we are targeting you with tear gas. Smart"

Huge online criticism was triggered on Monday evening as witnesses reported tear gas being used by security officers in residential areas where protestors gathered, many of which house COVID-19 patients who are in self-isolation in their houses, which could jeopardize their health conditions, particularly as Jordanian hospitals report being overcrowded with serious coronavirus infections.

Meanwhile, online users have also noted that live video streaming services on Facebook were disrupted and probably blocked by the government, in an effort to stop the public support for the protests and reinforce the evening curfew again.

In an online statement, the Euro-Mediterranean Human Rights Monitor documented several arrests by security forces in Amman and other cities across Jordan, condemning the approach security forces are taking in response to the protests.

Translation: "We strongly condemn the Jordanian security’s suppression of the demonstrations that took place in several neighborhoods of the capital in demand of holding those responsible for the Salt hospital incident accountable and the termination of defense orders. Based on field documentation, security forces arrested a number of demonstrators and fired a large number of tear gas canisters, some of which infiltrated residential homes."

Commenting on the current situation, King Abdullah II of Jordan has made a TV appearance on Monday evening, calling on Jordanians "to show patience throughout the current crisis, promising that officials whose neglect has led to the loss of human lives will be held accountable".