The Palestinian Authority Has Not Learned the Lesson; Calls to Release Journalist Naseem Maalla

Almost five months after Palestinian Authority forces broke into activist Nizar Banat's house in the West Bank and violently arrested him leading to his death on the same day, the PA has yet arrested another journalist Naseem Mualla, prompting calls for his immediate release. 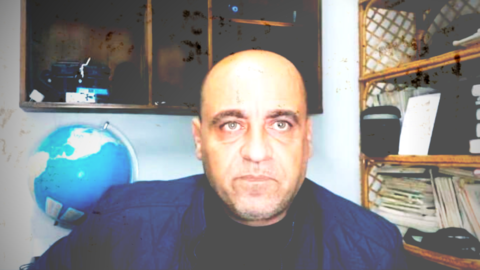 Even though charges against Naseem Mualla are not clear yet, his family and friends have reported that he has been granted release despite being detained by security forces so far. Naseem Mualla has mostly been known for live streaming weeks-long night confrontations between the Palestinian residents of Beita town near Nablus and Israeli soldiers.

Palestinian authorities in the West Bank should immediately and unconditionally release freelance journalist Naseem Mualla and allow journalists to work without fear of detention.https://t.co/fNqIZj4zPk

In response to Mualla's arrest, online users have started using the hashtag #الحرية_لنسيم_معلا (Freedom for Naseem Mualla) to call on his release and to condemn the PA's ongoing "persecution" of journalists and civil society activists in the West Bank.

Many online commentators remembered the June 2021 incident in which outspoken activist Nizar Banat was pronounced dead hours after his arrest by PA police. Banat was quite critical of the Palestinian Authority and its figures which led to him being violently attacked and beaten amid arrest.

Translation: "PA forces' continues to carry out oppression policies, referring journalist Naseem Mualla to Jericho prison for 15 days despite a prior release order. Naseem was one of the most active journalists in reporting events in Beita to the rest of the world."

Many Palestinian tweets expressed anger towards the PA saying that it has to change its policy towards critics, activists, and journalists, and to "stop being a second occupation" Palestinians live, in reference to the Israeli occupation of the West Bank.