What Makes a Saudi's English Newspaper Publish an Op-ed by Israeli Authors?

Published February 7th, 2021 - 07:06 GMT
The 2020 Abraham Accords between Israel and Arab states did not include Saudi Arabia. (Shutterstock: esfera)

Despite Saudi Arabia not being part of the Abraham Accords, through which relations between Israel and several Arab states have been normalized since September 2020, the English-speaking Saudi newspaper Arab News has recently published an opinion piece written by two Israeli commentators, for the very first time.

The most widely read English-language newspaper in Saudi Arabia published an op-ed by Israeli writers for the first time yesterday. The Arab News carried an article by Dr Hay Eytan Cohen Yanarocak and Dr Jonathan Spyer.https://t.co/l2urybXWfp

Statements made by Saudi officials, following the UAE and Bahrain decisions to normalize relations with Israel for the first time since its creation in 1948, continued to deny any Saudi plans to join similar efforts unless Israel abides by conditions that Saudi Arabia and other members of the Arab League set through the 2002 Arab Peace Initiative, including an Israeli recognition of a Palestinian state on the 1967 borders with Eastern Jerusalem as the capital of future Palestine.

Yet, analysts have traced numerous examples of an approaching deal between Israel and Saudi Arabia as the latter is showing less hostility towards Israel, especially in local media.

The latest example can be seen in the fact that Saudi's most-read English newspaper Arab News has allowed an op-ed written by two Israel writers to be published on the 2nd of February 2021.

Saudi Arabia’s online news site Arab News has published an op-ed by Israeli writers for the first time in its history pic.twitter.com/vIyPegWVCt

Highlighting the role played by the Turkish president Recep Tayyip Erdogan in the Middle East, as the article suggested that his policies in the region are focused on supporting militias that aim to destabilize Arab states.

The op-ed published in Arab News was celebrated by many Israelis and was written by Dr. Hay Eytan Cohen Yanarocak, who has been introduced as "an expert on contemporary Turkish politics and foreign policy, Turkish-Israeli relations, and the Kurds and Dr. Jonathan Spyer, a British-Israeli analyst, writer, and journalist who has had frequent travel experiences throughout Syria. " Dr. Yanarocak is a researcher at the Moshe Dayan Center for Middle Eastern and African Studies at Tel Aviv University. 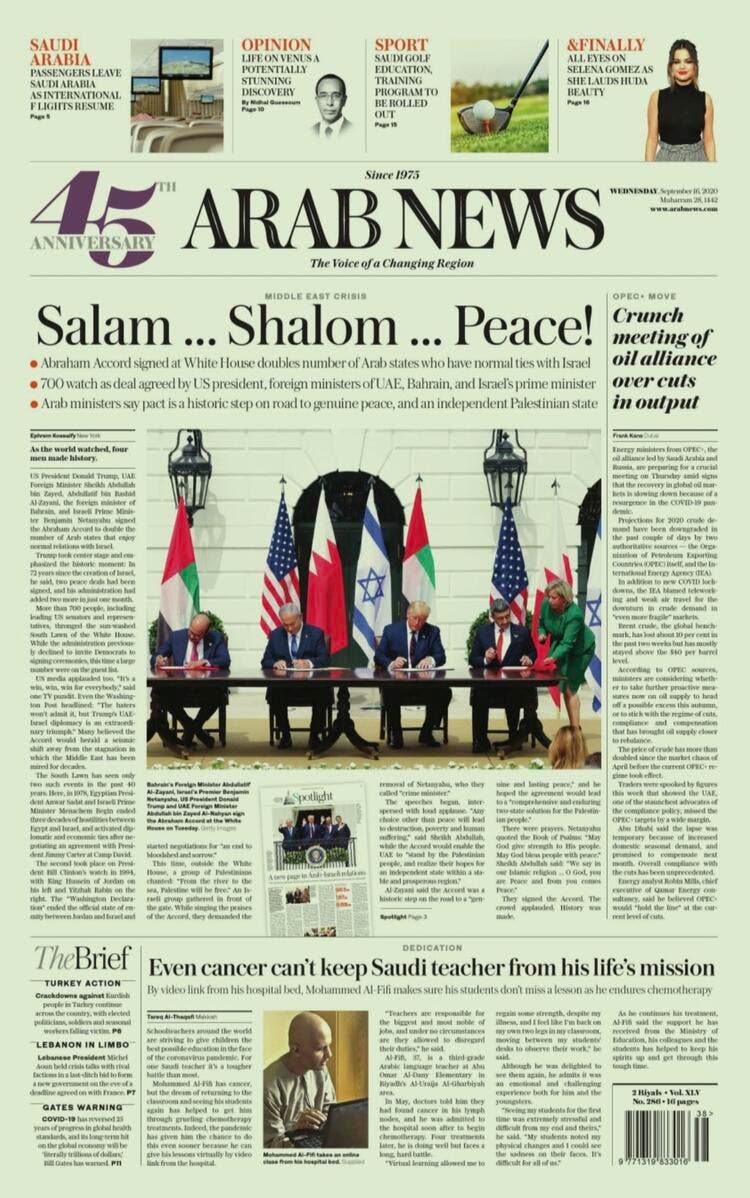