30 Years on Palestinians Remember The 'Intifada of The Stones' 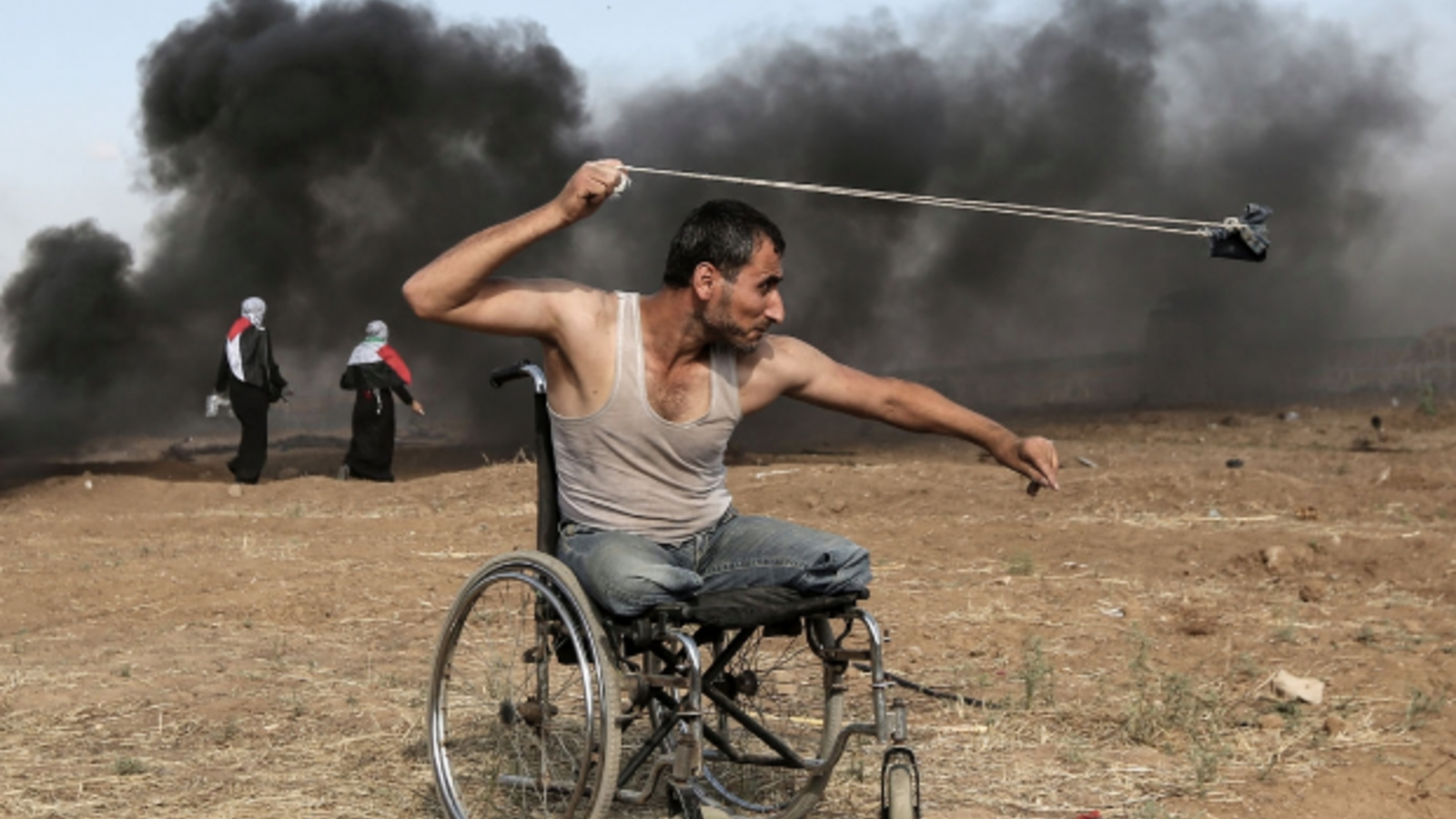 Award winner Mahmud Hams (AFP File Photo)
Highlights
Palestinians, who had no weapons, responded by throwing stones. The uprising became known as the  "Intifada of the Stones".

This week, Palestinians mark the 30th anniversary of the First Intifada as popular uprisings against corrupt leaders grip Iraq, Lebanon, Iran and Algeria roil the region from east to west. Meanwhile Palestinians remain bitter, frustrated and weary of the never-ending Israeli occupation. Their spirit has been crushed by the increasingly brutal and sophisticated repression of all forms of resistance since December 9, 1987, when the First Intifada erupted spontaneously.

The Intifada began in Gaza on the day after an Israeli army lorry struck a Palestinian car, killing four, near the Jabalia refugee camp. When 10,000 assembled for funeral of the victims, the Israelis fired randomly into the throng, killing teenager Hatem Abu Sisi and wounding 16 and eliciting protests that escalated into an uprising. While leading Palestinian figures met to discuss, clashes erupted in Palestinian refugee camps in the West Bank as well as Gaza. Palestinians, armed with sticks and stones, erected barricades across roads in their neighbourhoods to prevent Israeli army from entering. A general strike closed shops and kept Palestinians from going to jobs in Israel and the Israeli settlements.

The Israeli army responded by firing rubber-coated bullets and tear gas canisters into demonstrations mounted by thousands of men, women and children. Israeli Defence Minister Yitzak Rabin was quoted by commanders in the field as instructing them to order soldiers to use "force, might and beatings" and to "break the arms and legs" of protesters in order to crush the revolt. Palestinians, who had no weapons, responded by throwing stones. The uprising became known as the  "Intifada of the Stones".

As the Palestine Liberation Organisation (PLO) had been exiled in Tunisia, local West Bank and Gaza leaders emerged during the Intifada, which they intended to remain a peaceful revolt. What was interesting at this time is that while some senior activists were imprisoned by Israel, others remained at large. Journalists could even meet them at lunch time at the roof restaurant of the National Hotel in East Jerusalem or at their homes.

The most influential figure in the city until his death in 2001, Faisal Husseini, dwelt in a house with a garden on the Mount of Olives. Israel imposed periods of administrative detention on him and, eventually, compelled him to move to the West Bank, where I met him at the home of his cousin on several occasions. During one meeting, I asked him why the Palestinians did not follow Mahatma Gandhi's prescription for peaceful resistance developed while he was struggling for Indian independence. Husseini responded, "Israelis are not British, Palestinians are not Indians and the situation is different". He was right, of course. The Palestinians are in a far more desperate position because their occupier is also a coloniser, unlike the British Raj in India.

After the Palestinian chapter of the Muslim Brotherhood established Hamas, Israel, seeking to divide Palestinian ranks, played off Hamas against the PLO, which was dominated by Yasser Arafat's Fateh. For some time, Israel did not disrupt Hamas activities or confiscate openly distributed Hamas leaflets. Consequently, the deep division between Hamas and Fateh had its origins in the First Intifada. Israel did not, however, profit from its short-lives covert toleration of Hamas, which created a military wing, the Izzedin Al Qassam Brigades, to mount armed resistance to the Israeli occupation.

The first Intifada ended on September 13, 1993, with the signing of the deeply flawed Oslo Accords on the White House lawn in Washington, DC. According to the Israeli human rights organisation B'Tselem, 1,070 Palestinians, including 237 children, had been killed by Israeli forces, and Israeli settlers slew another 54 Palestinians. More than 175,000 Palestinians had been arrested and 2,000 homes demolished.

A second division in Palestinian ranks opened up post-Oslo between the Intifada's local leadership and PLO exiles after Arafat returned to Gaza in 1994 and imposed his rule on Palestinian-held sector of Gaza and Palestinian enclaves in the West Bank.

Oslo was doomed as soon as it was signed although well-intentioned Palestinian and Israeli peacemakers worked together with the aim of making the deal work. However, Yitzhak Rabin had no intention of evacuating the territories captured by Israel in 1967 and granting the Palestinian demand for a state in Gaza and the West Bank with East Jerusalem as its capital. A few weeks before his assassination in November 1995, Rabin told the Knesset he envisaged “an entity short of a state that will independently run the lives of the Palestinians under its control”. The borders of this entity would not be along the 1967 lines and East Jerusalem would remain Israeli.

Instead of giving priority to making peace with the Palestinians, Rabin preferred negotiating a deal with Syria. His attitude on the nature of the Palestinian entity and its borders explains why he did his utmost to stall and frustrate the step-by-step implementation of the Oslo Accords and subsequent agreements while maintaining and accelerating Israeli colonisation. He adapted these actions into a two-pronged strategy until his murder by an Israeli extremist, who wrongly believed Rabin was about to give away the occupied territories to the Palestinians.

The failure of the negotiations which followed the 1993 Oslo Accords to end Israel's occupation of the 1967 territories and result in the creation of a Palestinian state led, ineluctably, in September 2000 to the second rising, the Intifada of the Gun and Bomb.

Israeli leaders who succeeded Rabin have conceded to the Palestinians limited self-rule in major population centres, but have gradually colonised the land they need for their state. Although Israel has withdrawn its colonists from Gaza, the population of Israeli colonies in the west Bank and East Jerusalem has grown from 100,000 to 600,000.

Michael Jensen is a columnist for the Jordan Times.